Trout & Angels Blast Astros Below .500 in Battle of Platoons

It's been five days since we played a Statis-Pro game, but when we did today it was all about Mike Trout and the Angels blasting the Astros below .500 - which they are in actual MLB play so far.

Left-handed pitchers led the Astros and Angels to dramatically changed line-ups for both team due to the adjustment in the bottom right corner of each batter's card. The Angels blasted the Astros 11-4 in the second game (which counts as a three games to none sweep) after Mike Trout hammered the Astros for a near come-from-behind win in the first game, falling 3-5 but claiming the series four games to two.

Focusing on the bottom of Trout's card, the.999 OPS is one of the top few in the game. However, if you look across from it at the Bats: RP (right power) the next two numbers indicate he actually kills right-handed pitching more than left (/88 means he turns out to singles on an 88 if facing a righty) then he does lefties (13/ indicates he strikeouts on on 11-13 against lefties instead of the normal singles you see in this columns - and those adjustments change results on the pitcher's card as well).

He of course does not need to be platooned because he is still so good, and in the bottom of the 7th with the Astros leading 5-1 and needing only one run in the top of the 8th to claim a sweep, Trout knocked Astros lefty Valdez out of the game with a 2-run homer. Valdez is the Astros only lefty, and in the 9th with their All-Star closer Pressley in the game for the save, Trout lined a single to right to put the winning run at the plate. Ohtani then hit a shot down the left field line that would have tied the game, but Bregman made a clutch defensive play to glove it and step on the third base bag to let the Astros escape with a 5-3 win.

Trout then led off the 2nd game with a homer to set the tone for an Angels 11-4 sweep.

The right vs. left adjustment does lead to some platooning. For example the card by Trout, Andrew Valazquez, hits the same against right or left and he is very fun to have in the game because he is one of the only AA base stealers, and in fact he stole the only base of the series. He plays against right-handed pitchers, however if you scroll down to David Fletcher, the other option at short stop, you will see he gets singles off lefties on 85-88, so he played the first game against Valdez and went three for four including one single on an 86 that would be an out for almost any other player. 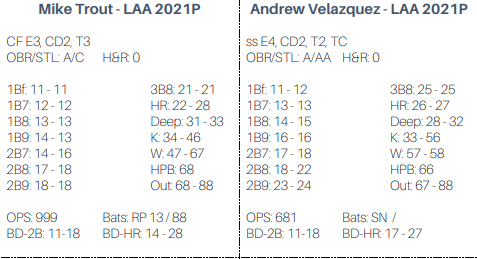 Here is the scoresheet and the updated standings with the Astros dropping below .500. 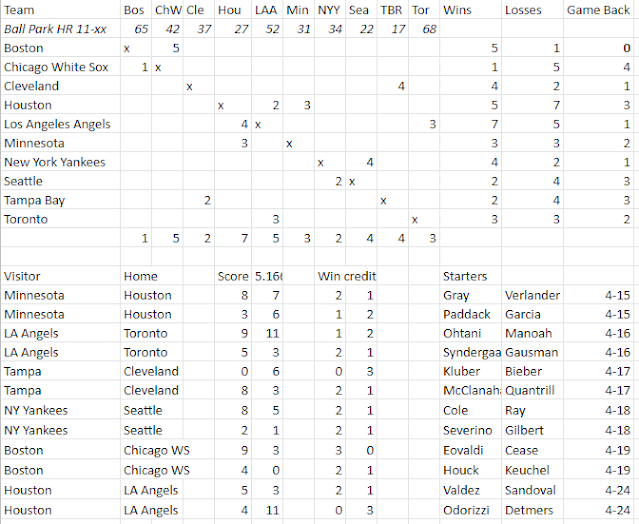 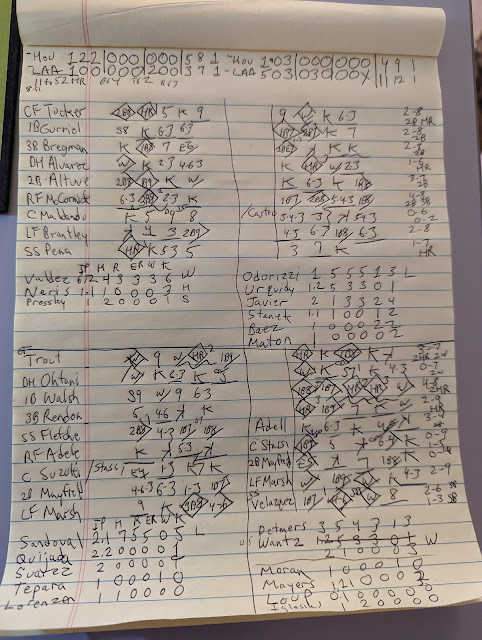 Posted by JohnPudner at 9:38 PM