If you are viewing this blog on your mobile and want to print the Statis-Pro Baseball cards in the next 6 blogs, I'd suggest going to computer and hitting www.pudnersports.com from there, the all 30 team sheets will appear in alpha order on your screen and you can print the teams you want. Click on the team, hit print, and then change to Landscape and likely 80% to fit.

Here is how I set up the teams using my 1978 Statis-Pro game, the clutch defense charts from years later, a free hand score sheet and in this case the sheets for the 2022 Minnesota Twins and Houston Astros.

As you can see I use a piece of paper under the pitcher and batter for each plate appearance, and in this case, the game ended when Ryan Pressley struck out Correa to win 6-3 and salvage a split. Game notes below the picture. 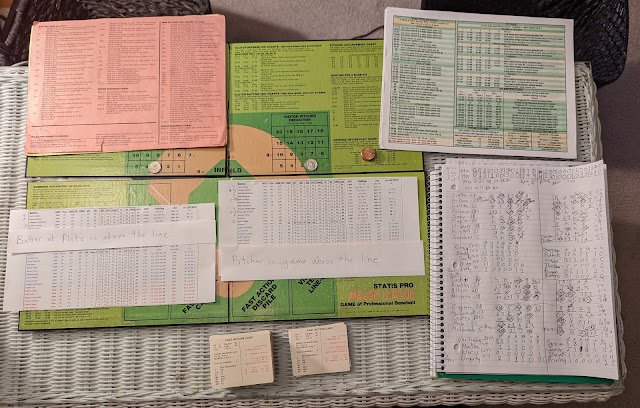 The Twins wild 8-7 win in the 1st game occured when the speedy pinch runner Nick Gordon (A-A on-base running and speed) pinch ran in the top of the 9th for Luis Arraez. Gordon stole 2nd, Correa moved him to third with a tapper to the pitcher that only allowed an OBR A like Gordon to advance, and then drew a balk on Jose Urqidy to score the winning run.

However, the Astros just missed winning in the bottom of the 9th when Yordan Alvarez hit a DEEP drive with Jose Altuve on first. The DEEP drive requires a new random number (11-88) and Alvarez had a 31 - good enough to be out if most parks. However, Houston only allows a joker on 11-27, less than a quarter of all deep drives, so the 31 missed a Homer by just two numbers.

Alvarez homered the at bat before, and the at bat after that to start the nightcap,.so a change in two numbers would have made it three homers in a row.

Verlander had a 1-hitter through 5 innings and a 4-1 lead, but was tagged for 4 hits including a 3-run Homer by Max Kepler in the 6th to leave with a no decision.

First time event in this series was 6 deep drives and all went out of the hitter friendly park (11-68, while 11-35 is average. On average, each team has one deep drive per 2-game series, so this was three times as many deep drives as typical in a 2-game series. 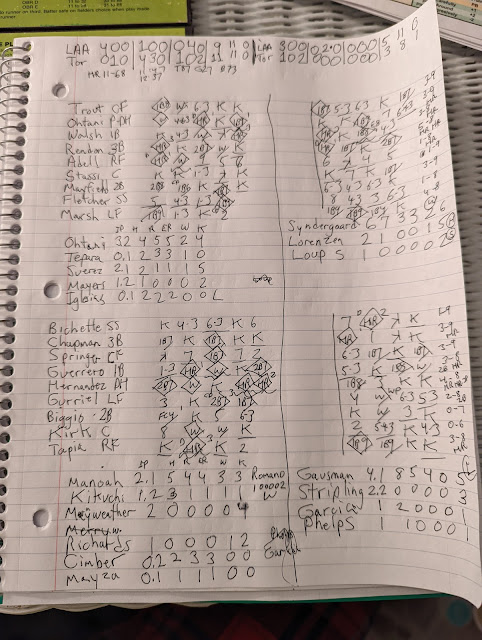