We played out first game with the actual 2022 projected Statis-Pro cards!

were a little concerned after our first three games when teams were averaging 7.0 runs per game, but after the Red Sox split two pitchers duels in Minnesota the average is down to 4.7.

The average would be even lower if not for the thrilling Twins walk off homer. An error on shortstop Bogaert kept the inning alive then Arraez hit a DEEP drive that in Minnesota would be a game winning homer on a 11-31 or a harmless deep fly on a 32-88 to send the game to extra innings. The drive scraped out on a 31 for a 3-run walk off and the 4-1 win.

The Twins almost rallied again in game two from a 2-1 deficit, leaving 4 runners in scoring position the last three innings and having another thrown out at home as the Red Sox hung on to preserve the split.

The first photo is of Carlos Correa's first home at bat as a Twin. 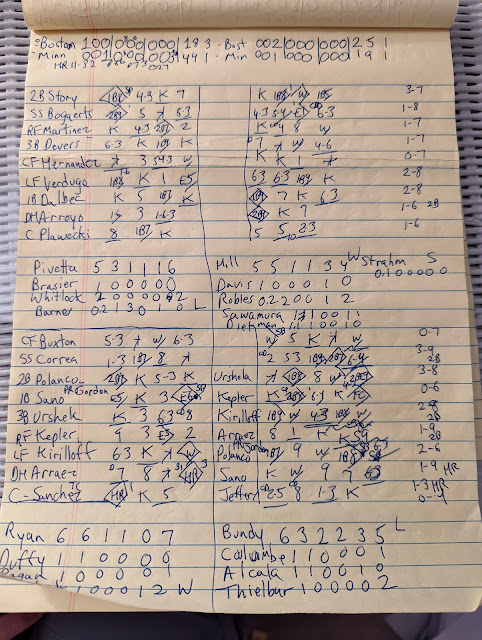 The Red Sox stay in first place, but if the Yankees won't he series against Toronto they would at least catch them if not move ahead. Here is the grid of games and the home run range at the top showing Minnesota's joke run range up to 31.

Posted by JohnPudner at 1:52 AM