The results are from games using the free Statis-Pro Baseball Game after clicking here to open the google sheet of all teams player cards. We play games to catch any kinks in the cards to ensure an accurate game when you play. We find it takes about 40 minutes to play a game.

The Red Sox wrapped up the first round of AL Statis-Pro games by dominating the White Sox to emerge as the only 5-1 team on our game tracker. The top number across the top is the ballpark factor, so a deep drive in Boston is a Homer in 11-65 and sac fly on 66-88.

In the game-by-game tracker we also tally the average runs scored per game, which now shows slightly above average 5.05 runs per game. Through three games teams were averaging a sky high 7 runs a game, but in the next 7 games they averaged only 4 a game. 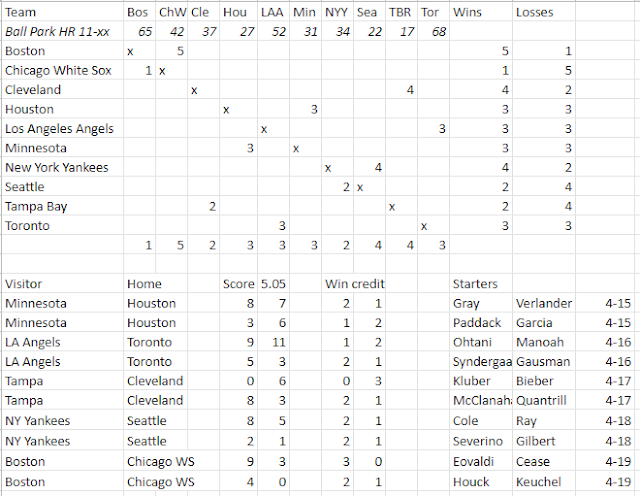 The Red Sox very deep pen, with six pb 2-7 and two even better pb 2-8 pitchers who combined for seven scoreless innings in the 9-3 and 4-0 wins.

As great a hitter the White Sox short stop Tim Anderson is, his poor fielder rating (SS E6 CD1) was costly, making two errors including a would be double play in the 8th that allowed a follow-up grandslam. Without that error the final would have been 7-3 instead of the actual 9-3, which gave the Red Sox and extra win due to our just for fun league rule.

2. A 3 games to 0 series is recorded if the winning team:

A. Led by at least 5 runs at the end of the 8th inning AND

B. The winning team did not use their top reliever available (not tired from the previous game) based on the best ERA until at least the 9th inning. 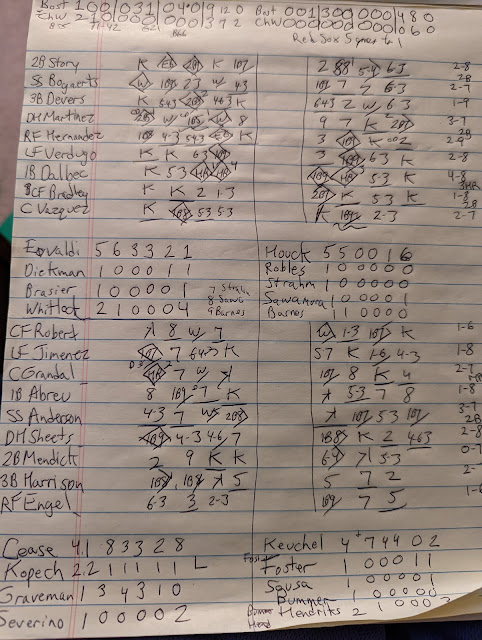