As our game tracker shows below, in our Statis-Pro game this season teams are averaging 4.5 runs per game, which happens to be the exact average last season (22,010 run divided by 4858 games = 4.5). So while the game matches reality almost exactly, this season teams are averaging a half run less (2307 runs divided by 544 games = 4.0). We will see if warmer temperatures get the balls to fly out of the parks again or if offense will stay down.

Tim Anderson hit his second 3-run homer in as many games, and this time it was enough to give the White Sox a 5-2 win to split their series with the Indians.

We tried printing an extra set of fast action cards and shuffling them (see stacks I'm photo) to make sure we had plenty for an entire game. This game took 31 minutes to play after the wilder first game won by the Cleveland Guardians 7-6 took 38 minutes. 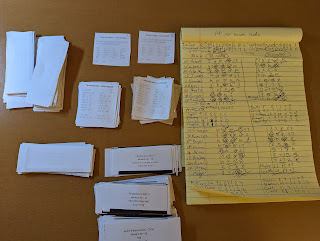 Posted by JohnPudner at 5:09 PM