As I return to my office at www.takeback.org this morning after my annual March Madness vacation days, please indulge me in my once-a-year sports email you receive from me (except for a few of you that are sports writers or SIDs and receive these more often.

For the 5 percent of you who are sports writers and/or follow www.valueaddbasketball.com or play the VABG basketball game - this is our time of year. For the first time in several years I am writing this from the Big East tournament at Madison Square Garden, but I did still take a few days last week to plunge into the numbers and create the new player cards. I did also calculate the player cards for all 347 teams, and the data is here and I will post the pdfs pf cards for all NCAA and NIT tournaments teams once the graphics person produces them.

Since most of you use this just to fill out a bracket someone put on your desk or gave to one of your children, let's get the actual picks out of the way, though I will update this at www.pudnersports.com for any updates such as if Louisville ends up replacing Virginia as the 4-seed in the West due to Covid.

To use this table, simply pick a column and write the name of the team in each row on the number of bracket lines listed in the column. The first six columns are based on methods outlined below for anyone who wants to go beyond just filling out the bracket, and the final column to the right is my gut pick for each team which does not necessarily coincide with what the numbers tell me in the previous columns. (we replaced the original table in the email without making any changes to picks, except we left the winner out of one game that we as being won by Ohio State, and we reordered the teams to line up with the way they are listed in the ESPN bracket. We have also now done separate blogs with photos of the actual brackets that match these lines).

The following is an explanation of each pick.
1. Value Add Column. The first column is based on the www.valueaddbasketball.com calculations for each player on the team, and which of them are injured for the tournament.. As shown in this screenshot, if you searched Villanova, Collin Gillespie is injured and out for the season, and since he was worth 7.45 points per game above a replacement player, Villanova is likely to be seven points worse then they were before his injury. While that calculation still left them just ahead of their first round opponent Winthrop, it does drop them below their possible second round opponent Purdue, so column 1 shows them winning "1" game before being eliminated.
Despite the dominance of the Big Ten and Big 12 this year, this system actually shows Houston as a surprise team to make the national title before losing to Gonzaga. 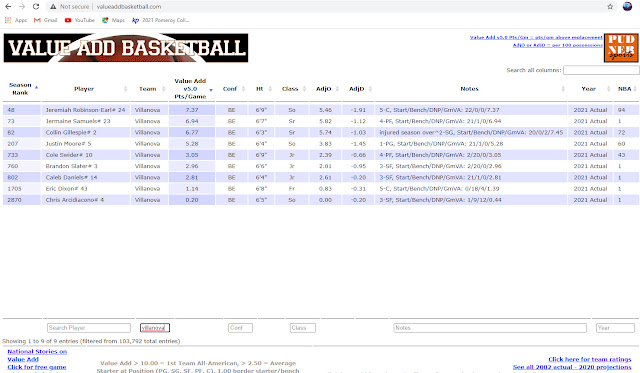 2. Hot. The second column gives extra credit for which teams are hitting the tournament hot. Since the Value Add Basketball rankings are balances for the entire season of play, I give extra credit in this column for teams that are surging. Based on the improvement in the past month in the www..kenpom.com ratings, Georgetown is the hottest team in the country, having improved 7.05 points en route to a stunning Big East Tournament title for Coach Patrick Ewing. While my mathematical system still does improve them quite enough to pass Colorado in their opener, many believe they will pull the upset.
The hot team to really watch however is the Big Ten champ Illinois, who improved another five points in the past month en route to securing a 1-seed. This system calculates Illinois making it to the national title game before losing to Gonzaga.
3. Coach who has been there. The third system adjusts by giving bonus credit for how far the coach has been in the tournament. This year it only shifted our calculations in a couple of games, giving Tom Izzo and 11-seed Michigan State a win over UCLA and then upset of BYU, and then Jim Boeheim and 11-seed Syracuse an upset against San Diego State. Many believe both coaches can take their teams further, but for the most part this system still left us with a Gonzaga win over Houston in the title game.
4. Defense. Because the pressure of March Madness bog games down and make teams scrap through defensive affairs, this system weighs team's defense more heavily.  This system gives an extra win to three of the four top defenses in the country with this being the one system in which Alabama beats Michigan to head to the Final Four. In addition, this gives Illinois the edge over Houston, who we picked to upset them in other systems, and Tennessee over Oklahoma State. Loyola-Chicago actually has the top defense in the country, but since they face Illinois in the second round it may not be enough for bragging rights to the state.
5. Experienced and good guards. The next system gives extra credit to teams with experience point guards in particular. The actual calculation gives credit for each year of experience the two starting guards have as well as their Value Add, and the best player in the country in this system is Colorado's McKinley Wright. If you go to the all-time rankings at http://valueaddbasketball.com/ballall.html you will see Wright is a senior, is ranked as the sixth best player in the country, and also was a great player all four years at Colorado (top 400 as a freshmen means he was already in the top 10% of the 4000 D1 college basketball players. This system is the reason I am a bit warry of going with all the people picking Georgetown to upset Colorado (though I finally did in my gut picks), and it shows them not only winning that game but upsetting Florida State to go Sweet 16.

The Experienced Guard system is the only system not to pick Gonzaga as national champion, as it shows Baylor's incredible guards defeating them for the title.
6. NBA Talent. The next system factors the actual talent on the court with enough skill to go to the NBA. Each player has a rating from 1 to 99 in the right hand side of Value Add Basketball, and the total of those figures indicates the following teams will have the most NBA-level talent on the floor for this tourament:
The reason many Mid-Major teams ultimately fall short on a title run is that they run into a Power 5 of Big East team that simply has more raw talent on the floor. The fact that Gonzaga actually has more NBA talent than anyone else in the tournament makes them less vulnerable. You may notice the other nine teams with top 10 NBA talent are all in a Power 5 football conference, while the Big East's Gillespie would place Villanova in the top 10 if not injured.
7. Go with your gut. The final column is simply my gut going through the brackets  - and that's really how you want to make your picks. Whether its watching games or playing the  VABG basketball game I invented, you just learn that one in three times the underdog just wins in basketball, which also explains why all the experts I see at the MIT Sloane annual event hate picking brackets.
Posted by JohnPudner at 11:21 PM