The important aspect of Value Add Basketball player cards that may be the trickiest to understand is the Dunk Range. When the two 6-sided dice total between a 51-66, this range is used to determine the result of the possession. If you can spend a few minutes getting familiar with this chart, you only need to look at the ranges at the beginning of each game to see what the dunk range is for each of the two teams and then use it for the entire game anytime a roll of 51-66 appears. 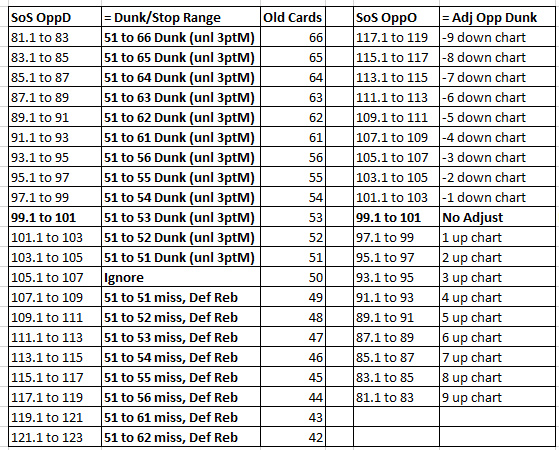 If the 51-56 roll is in the offensive team's dunk range, then the offensive player with the ball scores two points, but he keeps the option of instead hitting a 3-point shot if the 20-sided die on the same roll results in a 3-point made result.

On the other hand, if the 51-66 roll ends up in the "stop," otherwise written as the "miss, Def Reb" then the player with the player misses a shot and the player defending him gets the defensive rebound.

The third and final possibility is that the 51-66 roll does not fall in the range, and in that case those dice are ignored and proceed to the 20-sided die to see which of the five possibilities from his card result; a 3-pt shot made, 2-point shot made, draws a foul, misses a 3-pointer or misses a 2-pointer.
The calculation of this figure on the card is a precise measurement of the adjustment based on how tough the opposing defense the team faced during the season. A player who faces very tough defenses  all season will likely have worse rebounding and scoring stats then if he played very poor defenses, so this range adjusts for that factor.
As of Championship Sunday, Penn State had faced the toughest defenses this season based on the SOS OppD calculation of a 92.7, which based on the chart below gives them a 51-61 Dunk Range. Prairie View A&M faced the weakest defenses this year with a 108.5 rating, which on the chart below gives them the negative "miss, def reb" rating of 51.
On the right side of the chart, Northwestern faced the toughest opposing offenses with a 113.2 SOS OppO at www.kenpom.com, which gives them a "-7 down chart" factor, while Alabama State has faced the weakest offenses (90.9) which results in a "5 up chart" rating.
To take the most extreme cases you could have in a 2021 match-up, if Penn State's offense (51-61 dunk range) had the ball against Alabama State's defense (5 up chart), then you go from the 51-61 on the chart below up the chart 5 spots, and for the game Penn State dunks on any roll of 51-66 (unless they happen to have a 3-point shot made on the 20-sided die which they would choose to use instead).
On the other extreme, if Prairie View A&M's offense (51 miss, def reb) had the ball against Northwestern's defense (-7 down chart), then you go down the chart 7 spots to a "51-62 miss, Def Reb" so that any roll in that range is scored as a missed rebound by the player with the ball and a defensive rebound by the player guarding him.
The old cards showed dunk ranges going below 51 to show when they went in the missed range, so we list them down the center of the chart.
Posted by JohnPudner at 8:57 PM