The bracket published basing picks on the www.valueaddbasketball.com ratings of all valuable players plus the experience of the head coach in winning March Madness games has been correct on 25 of 32 picks in the first round to place in the 99th percentile.

The system correctly picked four upsets on the lower bracket below, the team winning with the worse seed - UCLA, Rutgers, Syracuse and Wisconsin. Almost penciled in Mark Turgeon to tip Maryland past UConn and should have pulled the trigger. That was a brilliant packed defense to make UConn shoot jumpers instead of driving. 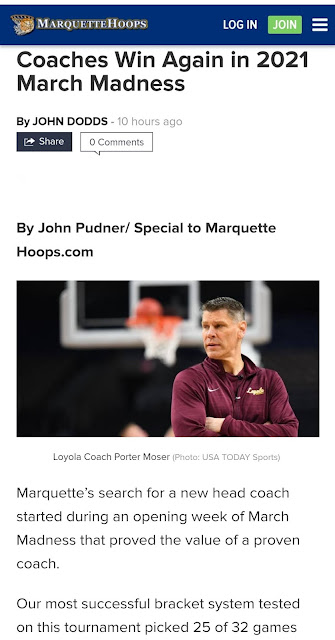 Teams bolded when they win 2nd round game to advance to Sweet 16. The "Prev Yrs" indicates how many of the past 25 years the coach has advanced to at least the 2nd round of the NCAA tournament coming into this tournament. All times Central.

Other systems factor on the Value Add Basketball Rankings, while other variations adjust for; 1, experienced guards, 2, defense and 3, how hot the team finished the season, or how much NBA talent they feature.

Here are the rankings of the 7 brackets we published, as tracked by espn, followed by the bracket in the lead - Value Add adjusted for coaches who have taken their teams on big runs.

Here are the actual brackets released Sunday, hours after the brackets were announced. Readers were told to list the team on as many lines as indicated.