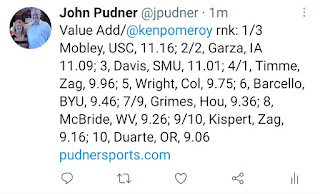 The new run of Value Add Basketball rankings after the Elite 8 games show the following Top 10 with only the three Final Four games remaining. We will update www.valueaddbasketball.com later today with all 4000+ players. In the 2nd column we show Top 10 players who overlapped with the ratings at www.kenpom.com. Luka Garza led both all season, but in the final weekend Evan Mobley snuck ahead of him in the Value Add Basketball rankings (still 3rd place at www.kenpom), and Drew Timme passed him at www.kenpom.com (still 4th place in www.valueaddbasketball.com. More to come ...

To better understand how Mobley skyrocketed in our ratings (and we do emphasize defense a bit more than Pomeroy's leader board I believe), start by looking at how dominant USC's defense was in the tournament.

Based on the number of possessions in each game, and Pomeroy's calculations of each opponents Adjusted Offense (Adj) we know how many points each team would have been expected to score in that many possessions against an average opponent. For example, Value Add rated defensive god Anthony Davis as by far the best player in college basketball his one year at Kentucky, but in Pomeroy's rating he was 4th.
Drake would normally score 73 in 65 possessions, Kansas would normally score 75 in 68 possessions, Oregon 79 in 67 possessions, and even in the tough Gonzaga game the Zags would normally score six more points - 80 in a 72 possession game. Put it all together, and USC averaged giving up 15 fewer points per tournament game then would have been expected.
You look at Pomeroy's breakdown to get an idea of how much of that was Evan Mobley altering shots with eight blocked shots in the first three games, and he did alter shots if you watched the Zags game. Add the 24 defensive rebounds to end possessions, and we factor all that with steals along with the factors above of the overall team defense and he passes Garza.