With my graphics person unexpectedly out and thus unable to produce the Value Add Basketball Game cards, I set up the sheets for all 347 teams - here is a link to team sheets and cards will be added soon.

To get it started, I went ahead and played Gonzaga against one of their possible first opponents, Sun Belt champ App State. I was impressed with App State's two big men, who you can tell from the cards (or rows of results below) never stretch to put up a 3-pointer but get the ball to the rim, grab offensive rebounds, and draw fouls. With a bunch of offensive rebounds App State only lost the overall rebounding battle to Gonzaga 29-32.

When the Zags had the ball at the other end, it was another story. While the dice gave them a cold start, eventually Kispert hit a few 3-pointers in route to 26 points and Timme added a double double (17, 10). At the bottom of this blog we sorted www.valueaddbasketball.com by defense (adjd column) to show Suggs calculates as the third best defender in the country this year and best defensive center, and he won the point guard battle 17-3 and helped the Zags protected the ball (only 8 turnovers to a respectable 13 for App State).

While App State would like to match the football teams stunner vs Michigan years ago, they'd likely feel OK after an 84-62 loss. In real life they need to beat Norfolk State to get to this game.

That being said, Coastal Carolina would have been a bigger threat if they'd made the tourney, but they will try for an NIT title.

Here are the two teams and the scoresheet, with some stats I write at the bottom and along the slides. 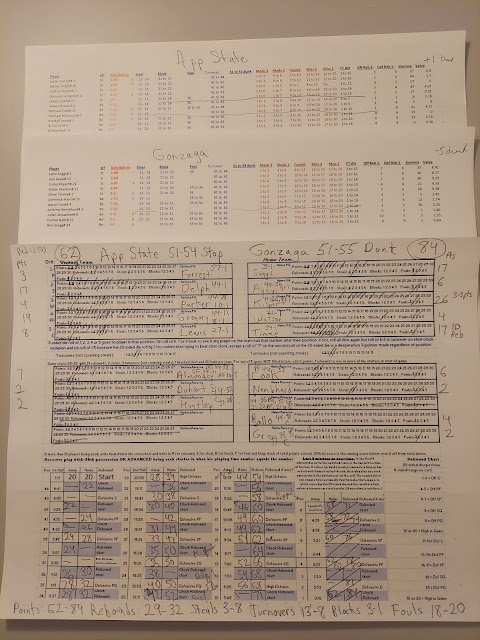 Posted by JohnPudner at 7:14 PM