After a two year wait, March Madness kicks off this week. After using the Value Add Basketball Game to play off the tournament last year (the big favorites made the Elite 8, but then Creighton defeated Duke in the title game) and the all-time tournament with 96 teams (Bill Walton's UCLA defeated Michael Jordan's UNC), here is our idea for this season.

We decided to hold an 128-team tournament with this year's player cards, meaning the 28-seed in each region starts against the 5-seed, the 27-seed plays the 6-seed etc., and the top four seeds in each region get a first round bye.

The team we wanted to play was VCU, whose dreams were dashed shortly before the Oregon game by positive Covid tests. For most of the game Jacob and Turner Groves dominated to take a 61-48 lead just as they led Kansas in the actual tournament late.

However Jacob Turner fouled out and VCUs Vince Williams (16 points, 7 rebounds) led a furious 25-8 run to take a 73-69 lead with 2 minutes to play. Turner Groves did tie the game 75-75, but VCUs Levi Stockard drew a foul and hit both free throws for the lead, and Eastern Washington missed two shots to tie the game in the closing seconds.

VCU would get the winner of Creighton vs. Loyola Maryland (not Loyola of Chicago that made another Sweet 16). 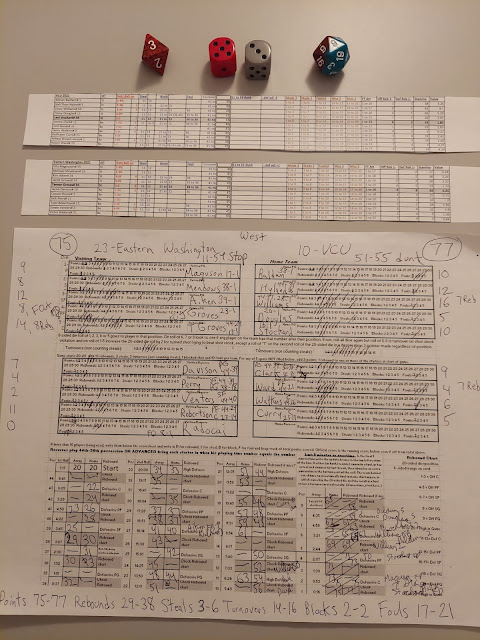 Here is our West Region: 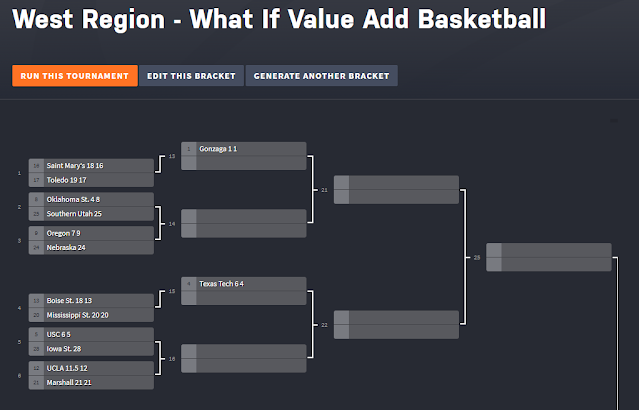 The teams were selected in the following manner.

1. The 68 teams selected for March Madness were all included.

2. The 16 teams selected for the NIT, as well as the five Covid-19 alternate replacement teams (Louisville for the NCAA and four teams for the NIT) were also included.

3. We included near misses for the tournament, including any teams that were getting decent votes in bracket matrix in the closing days of the season - including teams that were picked as a likely auto bid because they dominated in their conference. (most years any team that wins the regular season conference title but lost in their conference tournament gets an NIT bid, but none of that happened since the NIT was limited to 16 teams.

4. Finally, teams listed as one of the 50 most popular teams at www.kenpom.com were included even if they did not qualify based on one of the above, so Duke and Kentucky among others are in the tournament.

Once we selected the teams we seeded them based on their NET Ranking. One quirk to this is that Colgate is a 3-seed and gets a bye due to the No. 9 NET Ranking, which is the result of the Patriot League playing only each other - but we let the chips call where they may. We list the seed after the team as well as before but most teams have two seeds listed. If the first number AFTER the team is 1-16 it means that is their seed in the NCAA Tournament (11.5 means play-in game for 11-seed, and 16.5 means play-in game for the 16-seed). If the number is a 17- to a 20-seed subtract 16 to know what their NIT seed was, while a 21 means they are one of the four alternative NIT selection. If a team only has one number after their name, then they are not an NCAA or NIT team and are included under criteria 3 or 4.

Posted by JohnPudner at 3:43 PM