Another Day Off Computer: Cubs Win 10 of 12 to Join Statis-pro Playoffs

We just realized we accidentally restricted the grid of each team's record against the other teams in the league, but you can click to open it now. After spending 12 hours working on the computer yesterday, i stayed off the computer to play a couple of Statis-Pro series below. (play here for free). Every time someone asks me to make a computer version of Statis-Pro or Value Add Basketball Game, I tell them the screen is my work, getting off the screen is my free time!

As for today's games, the Cubs went 10-2 their first two series against relegated teams, surging into the playoffs and catching the LA Dodgers.

A couple of overlapping notes from the two series.

In four games, the pitchers had an incredible five hits - going 5-18 for a .278 batting average. Most NL Starting pitchers average just over one hit per 18 at bats. The standard hitting card for an NL pitcher has hits on just four numbers, 11-14, gets on base on only two numbers (walks on 51 and hit by pitch on 52) and is out on 58 of 64 numbers. Granted the Diamondbacks had one of the top hitting pitchers in baseball on the mound in Bumgarner, who has hits on 11-25 (13 of 64 numbers) and went two for two. When a pitcher goes up to at least 21 on hits, you use the opposing pitcher's PB to see if the action is on the card of the pitcher at bat or on the opposing pitcher's card. Buhler is also above average at the plate with hits on 11-16, and when he is at bat the opposing pitcher's PB is skipped and the action goes straight to his card.

A second overlap between the two series is that both the Cubs and Dodgers won a game by five or more runs but did NOT get sweep credit.

The Dodgers won their second game over the DBacks 6-0, but only led 3-0 at the end of eight innings, so only received credit for winning two games to one. Since the DBacks had stunned Bauer with two early runs to win the first game, the series was recorded as a 3 games to 3 split, leaving the Dodgers 36-30, though still in the playoffs (see win-loss grid at bottom of blog or by clicking on link).

The Cubs then won 5-0 in their opener against the Pirates, but also led only 3-0 after eight innings so did not receive sweep credit in that game. However, they did receive sweep credit for a 9-3 win in the second game, s they led 8-3 after eight innings before scoring a run in the ninth with a position player on the mound. The Pirates used all their pitchers by the end of the 8th, using their top relievers to try to hold the Cubs lead in hopes of cutting the margin to less than five runs by the end of the 8th, but while they rallied to cut the deficit from 8-0 to 8-3, they could not push across a fourth run to avoid the sweep.

That sweep gave the Cubs a 5-1 record for the series, to follow-up on a 5-1 win over the Marlins in the previous series to improve from below .500 to the same 36-30 record held by the Dodgers to also qualify for the playoffs.

The two winners would play the 1st place Mets and the 2nd place Brewers (three games out).

Five of the top six teams in the NL Statis-Pro season match the real baseball standings. The only exception is that based on the real season, the Giants would replace the Cardinals in the top six. 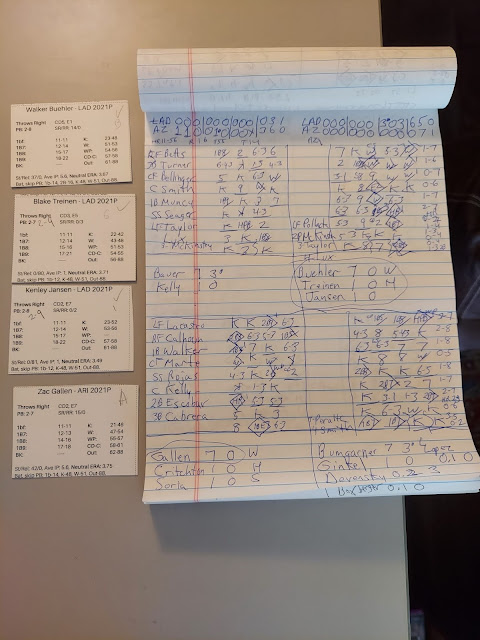 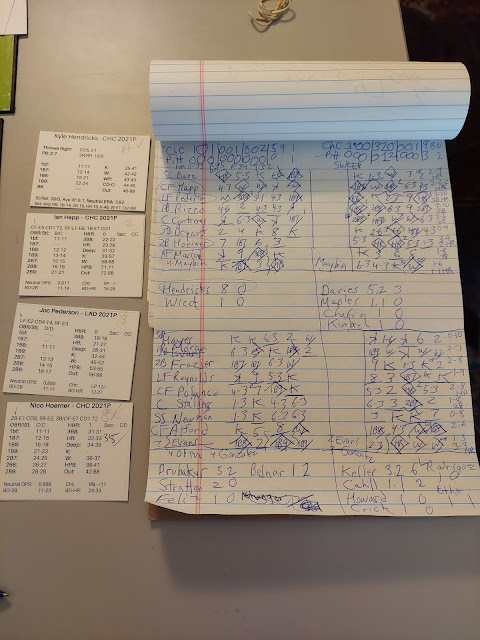 Posted by JohnPudner at 2:34 PM