In addition to listing teams record on our google sheet of results, we list each team's anticipated record to the right assuming they play .500 ball against any of the other 10 qualified teams, but average going 4-2 in each remaining six game series against one of the relegated teams (since relegated teams are only 53-91 when playing a qualified team).

The Cubs had the toughest schedule possible, playing the top nine teams in the NL first. Their last 5 series are against the bottom five, and the first of those 5 were no match. The Cubs destroyed the Marlins, winning the first game 7-4, and then getting SWEEP credit for a 14-1 destruction to come out of the series with credit for five wins and one loss and a 31-29 overall record. Because they get to play three of their next four series against other relegated teams, we project them to finish 46-38.

That makes them one of six teams - along with Atlanta, Cincinnati, Los Angeles, San Diego and St. Louis - to project to finish either 46-38 or 45-39 in a dog right for the last four playoff spots (3rd through 6th place) in the Statis-Pro NL. So far the New York Mets project to finish first and 53-31, and the Milwaukee Brewers project to grab the second bye at 49-35. The three teams that project to be at the bottom of the pack are Arizona, Washington and the one team that completely has us turned upside down, San Francisco. San Francisco projects to finish 40-44 for a .476 winning percentage, a bit better than their preseason FanGraphs projection, but nowhere near their actual league leading .623 current winning percentage in real baseball.

Below is the graph of games played an projections, followed by the scoresheet from the Cubs destruction of the Marlins. 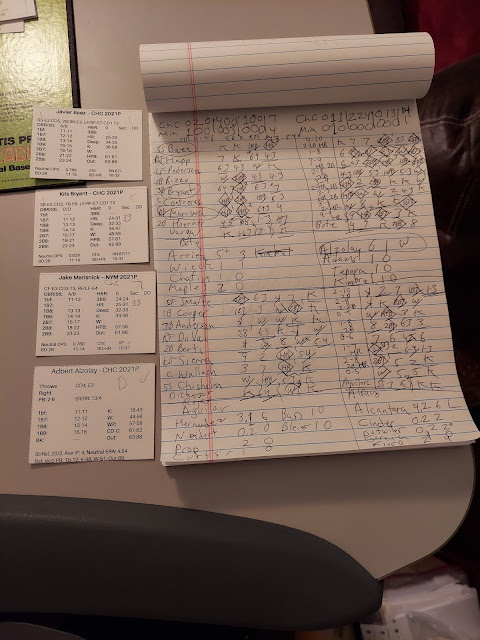