Before reviewing the Dodgers revenge tour against the Houston Astros and then their 2017 "sign stealing" scandal manager AJ Hinch and his current Tigers, lets look at the Statis-Pro card of JD Martinez. This card just determined whether the Dodgers or Brewers would be in second place. 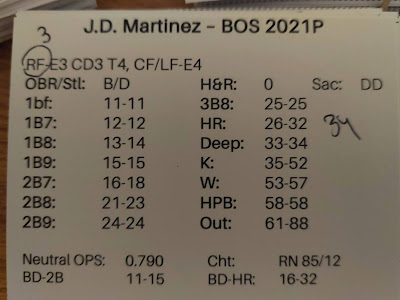 Martinez card was strong with home runs on 26-32 (two 8-sided dice or Fast Action Cards-FAC) part of a card that would project a .790 OPS. However, because he dramatically out performed that card the first two months of the season, we wrote in the "34" to show he now hits homers on 26-34, with is about an .870 OPS.

He came up in a 1-1 tie with men on second and third against Cody Burnes, one of two Brewers' PB 2-9 (top 5% of all pitchers). While Cody kept the action on his own card (an 8 on the 2-12) the random number of 12 would normally have been a 2-run single kmocking Burnes out of the game and a loss by the Brewers would have landed the Dodgers in second place for the playoffs (as of today).

However Burnes is a right-handed pitcher, and the 85/12 in the bottom right of Martinez' card indicates that he destroys lefties (turns 85-88 into singles with runners advancing two bases). However 12 to the RIGHT of the slash indicates and 11 or 12 is changed to a strikeout against a RIGHT-handed pitcher, whether the number is on the batter or pitcher card.

The Brewers were saved, won the game, and now that we've seen 6 of 15 Statis-pro AL teams in an interleague series, the Brewers moved back past the Dodgers so the NL playoffs if the Statis-pro baseball season ended today would be:

With the BoSox going 2-4 against the Brewers incredible two pb2-9 (top 5% of all ERAs) starting pitchers, the AL is now 19-17 and gets to face most of the bottom of the rotations later.

Bogerts went 3 of 4 including a homer in the second BoSox game, but his clutch defense worst rating of CD:1 resulted in him misplaying a grounder down the third baseline into a 2-run double the inning after Martinez go-ahead hit wqa negated by the 85/12 mentioned above. Most third baseman would have made the play to allow Eovaldi to leave with a 1-1 tie after six innings to result in the 3-1 Brewers win.

Yelich 2-out grandslam in the second game was the difference in the 6-3 Brewers win.

With better clutch defense for the Dodgers Smith (catcher) and Turner (3b), the Dodgers would have won the series with the Astros and been in 2nd regardless, but defensive miscues made them settle for splitting 3 games apiece with the Astros. Smith did not get to a.slow roller most catchers would have turned into an out to end the 7th inning by preserving Bauer's shutout. Instead, the play allowed the only run in a 1-0 Astros win. In the second game Betts and Turner combined for 4 hits including 2 homers against Greinke for a 3-2 win.

The top 4 in the Dodgers order combined for 6 homers and 11 hits in two games against the Tigers - winning 13-4 for sweep credit.

The Dodgers chased Tigers starter Turnbill with a 4-0 after three innings in the second gake, but Tigers' centerfielder Reyes threw out Bellinger trying to score from 2nd base to end the third. In the 7th, H Castro hit a grandslam to give the Tigers a 5-4 win. 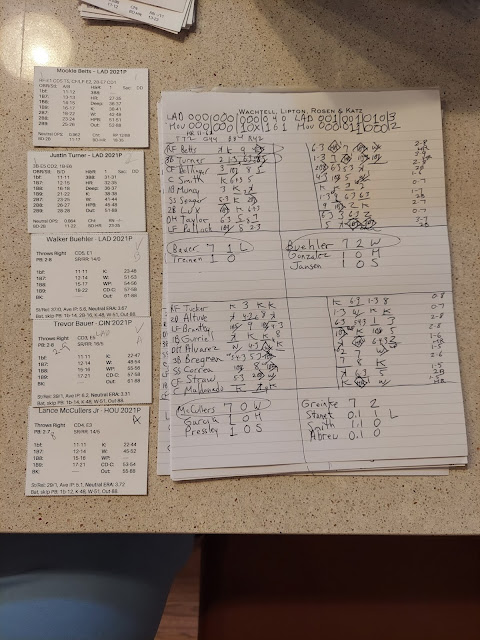 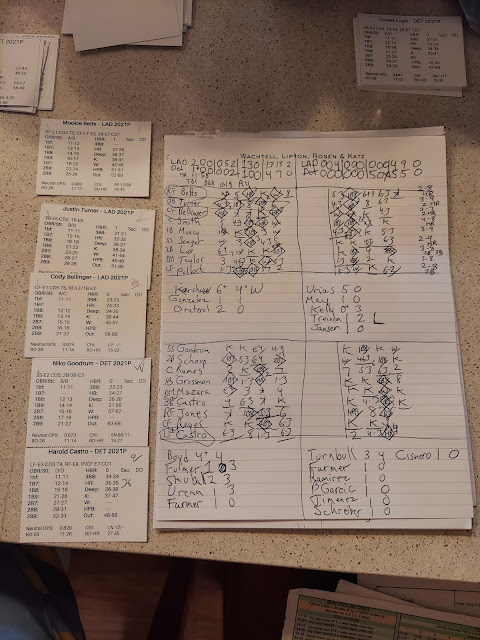 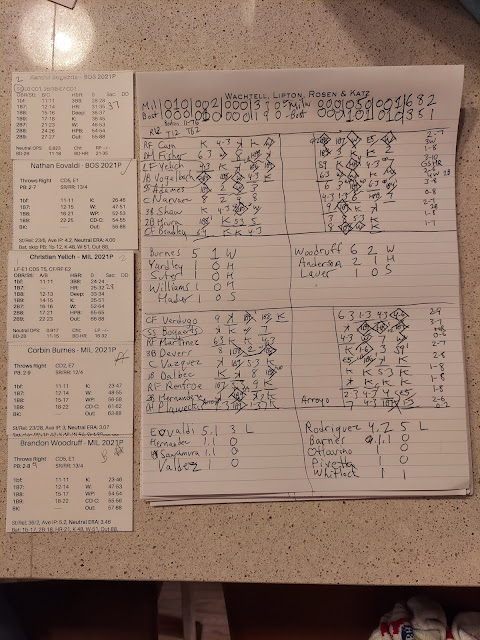 Posted by JohnPudner at 6:54 AM