DBacks and Giants only Outliers; Injury-free Mets Still the Best

The Nats lost two more games (see scoresheet at bottom of blog) to fall to 28-32, a 0.467 winning percentage that is just 0.036 better than their real season 0.431 winning percentage.
Only two of 15 NL Statis-Pro teams are performing a lot differently than their real team. The Arizona Diamondbacks started the year slugging their way to wins, and have fallen off dramatically but are still 30-30, for a .500 mark that is 0.183 better than their actual 0.317 winning percentage. On the other side of the scale, the Giants are just 27-33, way short of their NL best 0.623 and the baseball world wonders if they are for real.
The four teams who were relegated for poor records through 36 games do also have losing records in real life, and as you can see the other nine of 11 teams who made the cut have records very similar to their real records:
Keep in mind each team has actually played 20 games, but our league rules count each game as a 3-game series won by the winning team 2 games to 1 unless ... the team that wins lead by five or more runs at the end of the 8th inning without having used their reliever with the best ERA through that 8th inning. The chance of winning a game by five runs is 14%, just as they chance of sweeping a 3-game series is 14%, so this keeps almost every game exciting (even up by six runs, a 2-run inning allowed costs you a game) and accounts for a poor team lucking into a few 1-run wins while being destroyed by 5 or 6 runs by superior teams - a run differential that would likely play out over the course of a longer season.
Besides the Giants and DBacks, the only other team a bit off is the Mets, but we believe they really may be the top team in the league. Their 38-22 record in our game is the best in the NL, and is the result of each team playing at full strength unless a player has an injury that may cost them most or the whole season. The Mets may really be that good, as indicated by the fact that even though they have often had only half their regular players available due to the terrible injury bug, they have a real-life 0.556 winning percentage to lead the NL East.

We don't know yet whether to believe the Giants are the team below .500 team in Statis-Pro and in their FanGraph projections, or the contender in real life. They've always confused board and video game players who use last year's stats for the current season. Start by reflecting how the Giants continue to confuse everyone who plays any type of video or board baseball games using the past year's cards for the current season. Here are the Giants finishes among all 30 MLB teams in one 6-year stretch:

Below are the Cardinals wins over the Nats, both one-run wins against the bottom two of the rotation, so they did not face Strasburg or Scherzer.

Andrew Kritzner was the unlikely hero with a pinch hit game-winning homer to post the 6-5 win in a game the Cards trailed after one inning 4-1.

The first game Mikolas was four outs from a no-hitter, and after he allowed a single Gallegos shut down the last few Nats for the win. Mikolas was tiring when the hit was allowed based on our rules for endurance:

If the Starter's SR runs out (reduced by one for runners allowing first base unless on an error, and then another for that runner scoring, and reduced by one any time an innings ends. OR

If he does not run out of SR, he still tires in one of two ways based on his average innings pitched:

a. He can round his average innings pitched and pitch one more inning that that (e.g. he averages 5.7 IP then he must come out at the end of the 7th inning, OR

Every batter faced after running out of endurance either of those two ways reduces the PB rating by one, so if a pitcher had the best rating - PB 2-9, then the first batter he faced after being tired he is a PB2-8, then PB 2-7 for the next, then PB4-7, PB2-6, PB2-5, PB2-4, PB2-3, PB 2-2, and after that skip the PB and go straight to the batters card for the Random Number on every at bat.

Relievers can tire if their RR runs out the same way as the starters SR, and as long as that has not run out they can pitch to the end of the inning in which they entered, or if they strattle an inning can go as many batters as the innings pitched X 4, just like above but never more than 2 batters or for a starter coming out of the pen, 3 innings. 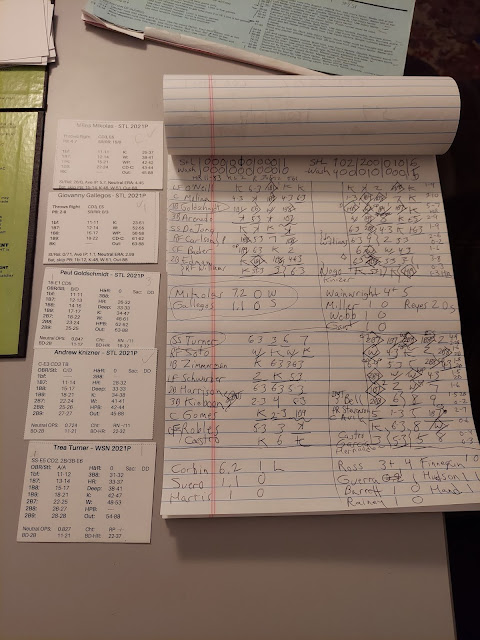 Posted by JohnPudner at 9:18 PM