Our first 5 NL Statis-Pro playoff series were decided 2 games to 0, but the Phillies won 5-4 in 10 innings to tie their series with the Brewers 1 game a pice and put Aaron Nola back in the game.

While the Brewers no. 3 starter Peralta is still a PB 2-8 like Nola, both of the Brewers PB 2-9 relievers, Williams and Hader need to rest for the decider. Here are the scoresheet for games 1 and 2. We will add Game 3 at the bottom of the blog. The winner gets the Padres in one semi, while the Braves play the Dodgers in the others.

Hader allowed no hits in the 9th or 10th, but with a runner starting on second lost due to a balk and wild pitch to allow a 3rd and deciding game below. 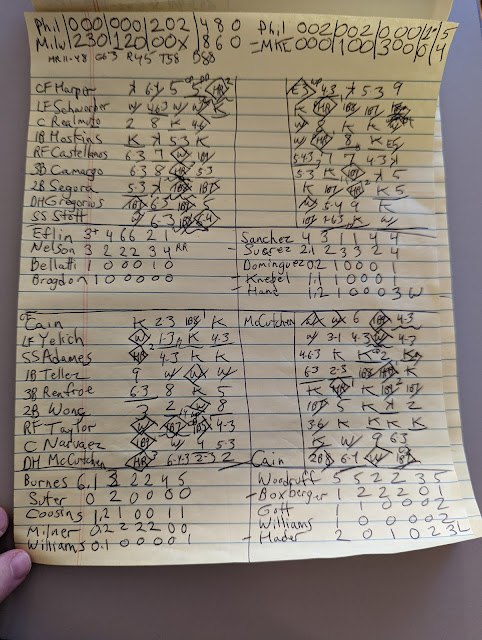 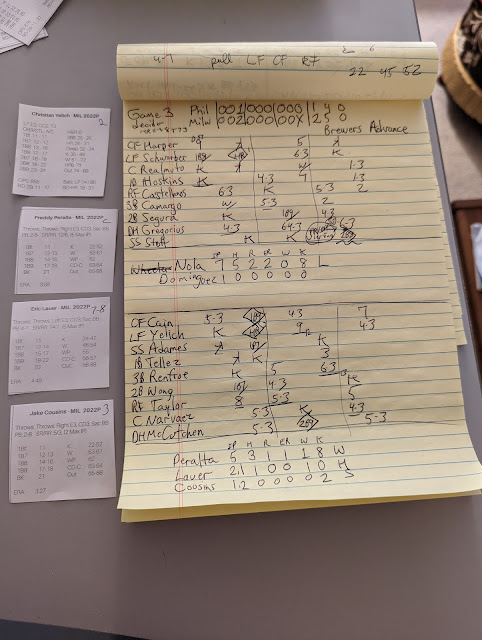 Yelich hit a 2-runner homer in the third inning, and with a depleted bullpen three Brewers pitchers made it hold up for a 2-1 win to advance to the semifinals vs the Padres.

Peralta put in a great outings but can only pitch up to 5 innings and the only other pitcher remaining with an above average PB was Cousins.

Lauer - who can start - brideged the two pitchers with 2.1 shutout innings. When he allowed hit first hit - a 1-out double in the 8th, Cousins get in to strikeout Harper and Schwarber (who homered earlier) to end the threat. He then did not allow a ball out of the infield in the 9th for the save.