Bieber went 7 innings allowing only one unearned run to keep a 0.00 ERA after two starts, but the bullpen could not hold his 6-1 lead to give him a second straight sweep.

If the Angels had not scored 2 runs in the bottom of the 8th after he left then Bieber would have 2 of only 5 SWEEPS (5 run lead after 8 up) in the first 26 games of year - as it is only the Yanks Cole and Red Sox Eovaldi have matched Bieber in gems for sweeps, and the Angels slugged their way to an 11-4 sweep.

Typically in 26 games one team or the other would have SWEPT 7 games - so 4 is behind pace. This is just a league rule we play in our seasons, but certainly not required to play Statis-Pro Baseball.

The Indians 11-7 record is much better than their actual MLB record, but we use 4-man rotations so any great pitchers like Bieber make a team batter in our game then when he is only pitching ever 5 or 6 games in MLB.

Here is the score sheet of the doubleheader and then the standings and game log. 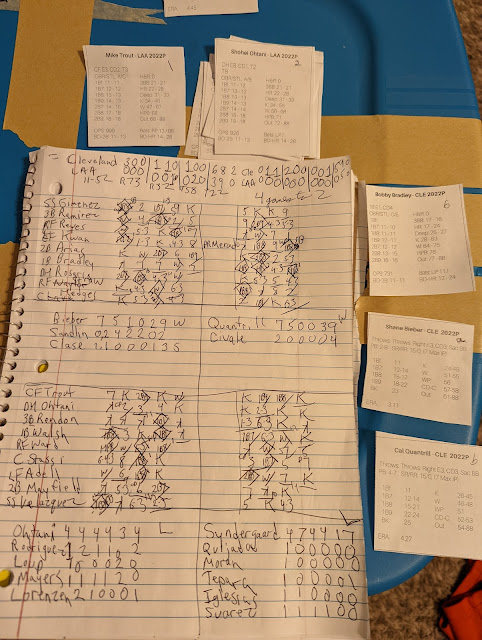