Corey Kluber was ejected after giving up 4 walks in 2.1 innings as the Blue Jays took a 4-0 lead on a grandslam by leadoff hitter Hernandez.

The games were a mirror - as Hernandez batter leadoff and how heroics backed up a 6 inning, 0 run outing by Manoah for a 6-3 win.

In the second game it was the Rays leadoff hitter Josh Lowe with the batting heroics - 3 hits - while McClanahan threw 6 scoreless innings in a 3-0 Rays win to earn the split.

With no "sweep" 5-run wins in this series, there were 6 sweeps in 30 games during the first three rounds for 20% of games. The actual MLB average this year is 25%, but because our league relegates the bottom 5 teams, there are no chances to beat up on the week teams as the 10 are more balanced.

In fact, noone has a better record than 11-7 at this stage. As the tracker below the scoresheet shows no team is worse than 7-11 either. The average runs per game is 4.4, whereas last year it was 4.5. 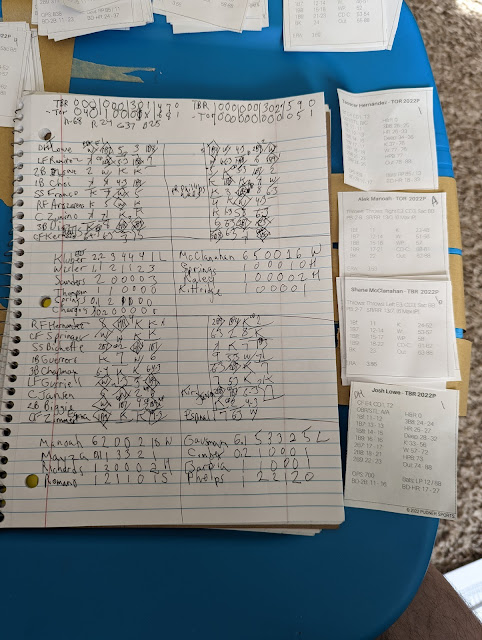 Posted by JohnPudner at 5:18 PM