Dodgers beat Cards, semifinal rematch with Braves with Freeman on their side

The 8-seed Cardinals missed a chance for a Game 1 upset of the Dodgers, wasting lefty Matz's 5.2 inning, 2-run performance for a 2-1 loss. The 1-seeded Dodgers then completed the best-of-3 sweep when their first 5 batters had extra base hits in an 11-0 win.

Several of the Dodgers dominate righty pitching but are not as strong against lefties (Betts strikes out on 11-13 vs lefties with his 13/88), freeman 14/87, Smith 14/87. In the first game Freeman hit a DEEP drive that would have been out of St. Louis or Atlanta but was caught in Dodgers Stadium, and Betts hit a DEEP drive and then drew a 27, missing the 11-26 Dodger Stadium homer range by one.

However Freeman later hit a Homer after turning a double play due to his cd4, and Betts hit a "little league homer" when his second double if the series skipped past leftfielder O'Neill and with Betts OBR speed he rounded the bases.

The 11-0 blowout also let the Dodgers rest their whole pen except for Price finishing the last 3 innings, while the Braves will need to rest their 2nd, 3rd and 4th best relievers Matzek, Minter and O'Day due to a hard fought series against the Mets. We have a pitcher rest of he pitches to at least 5 batters or pitches in a 2nd straight game. Price will need to miss games 1 and 2 since he pitched to more than 10 batters, but he is only the 7th best reliever card for the Dodgers.

Game 1 will be the Braves Anderson vs Kershaw, game 2 would be the Braves Ynoa vs. Heaney and if necessary a Game 3 (which oddly has not happened yet in the tournament) would be Fried against Buehler. 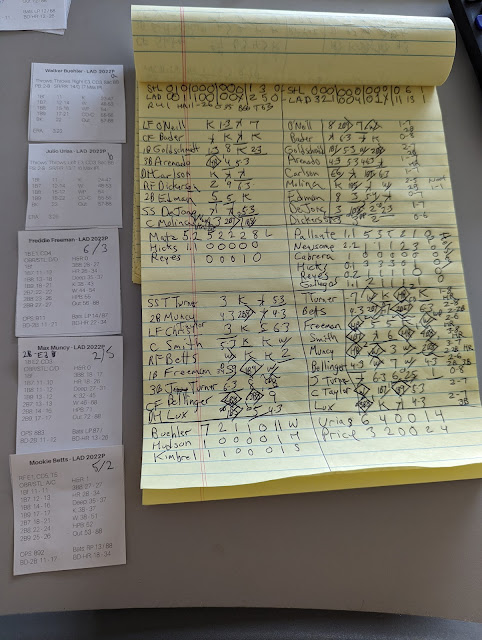 Posted by JohnPudner at 2:28 PM