Mariners and Astros Sweep Each Other

Right after the previous post noting only 4 of 26 games had been won by 5+ runs for a "sweep," we had a 2-game series in which each team blew out the other once for a "sweep."

Ray showed the Astros vulnerability against lefties with a 7-inning 3 hitter and Haniger had a Homer, double and single to lead a 14-2 Seattle win over Houston. That gave the Mariners credit for a 3 games to 0 edge.

However, Garcia the threw 6 shutout innings and because neither closer pitched in the first game blowout, Presley could pitch the 9th to wrap up a 7-0, 4 pitcher shutout. Correa's replacement at shortstop - only a CD2 as opposed to Carlos top cd5 but with pop in his bat - had 2 doubles in the win to secure the Astros Sweep for 3 games to 0 edge to make the series a 3-3 split.

One reason I like doing all 2 game series is I keep it simple with all of each team's relievers pitching one of the two games but not both - so you do get to see each of their cards in action, but not team is at a disadvantage in a series because they have tired relievers from the  previous series. This season I have pitcher the top 2 starters or the 3rd and 4th best starting pitchers for each team against each other. This works fine if you keep all teams with just as many games, but when I've let one team get ahead of others in games, I've had to pitch the 1st and 4th best starter or the 2nd and 3rd best to keep it even.

Below is the score sheet with the player cards for those 4 players mentioned, and the the log if all games to date. 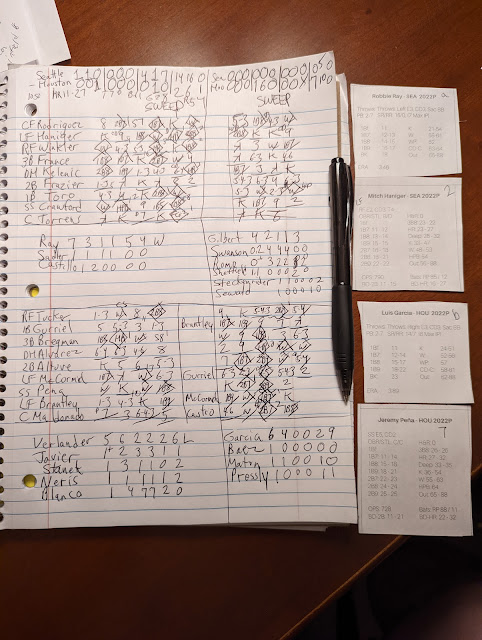