The No. 10 and last seeded Cubs nearly pulled two upsets, but Jean Segura cleared the bases in the Phils final at bat in both games to take the best-of-3 series. The Phillies advance to play the 2-seed Brewers, but with the disadvantage of their two PB 2-8 aces Nola and Wheeler being used against the Cubs as they face the Brewers incredible rotation. Here is the tournament of best-of-3-series as we get to know the Statis-Pro cards for the top 10 NL teams since we are playing the full season on the AL side this time. 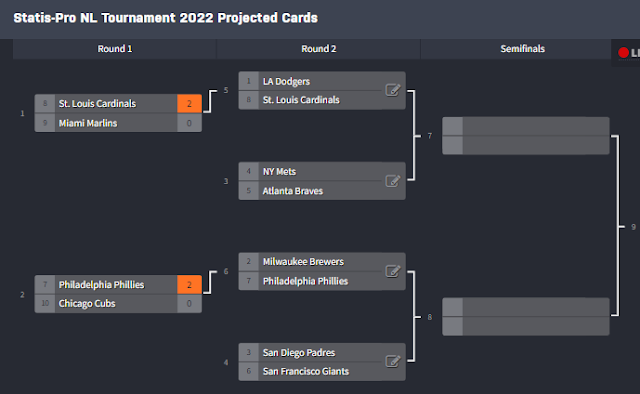 In Game 1 Marcus Stroman pitched a brilliant 6 inning, 2-hitter with 8 strikeouts and 1 walk to hand a 1-0 lead to his bullpen. However in the 10th Camargo walked, pinch runner Muzzotti stole second, went to third on a sac fly and scored on an infield single to tie the game 1-1. Segura then hit a 2-run homer to make it 3-1 in the bottom of the 8th and it held up for the win in game 1.

In game 2, it was the Phillies set up man and closer who failed, with Frazier's 3-run homer capping a 4-run 8th to give the Cubs a chance to force a game 3 with a 5-3 lead. However with two outs in the bottom of the 8th the Phils rallied to cut it to 5-4 with 2 on and 2 outs and then Segura drilled a clutch batting (BD) 2-run double.

The Cubs did get 2nd and 3rd in the top of the 9th with Jason Heyward, already with 3 hits in the game, at the plate. At this point it actually worked out for the Phils that their top two relievers, both right handed, were knocked out in the 8th inning. That meant Ranger Suarez, a lefty, was in the game. The random number was a 14, a game tying or game winning single against a righty, but Heyward's 14/87 indicates an 11-14 is changed to a strikeout against a leftie pitcher (while 87-88 is changed to a single runners advance 2 bases against a righty). 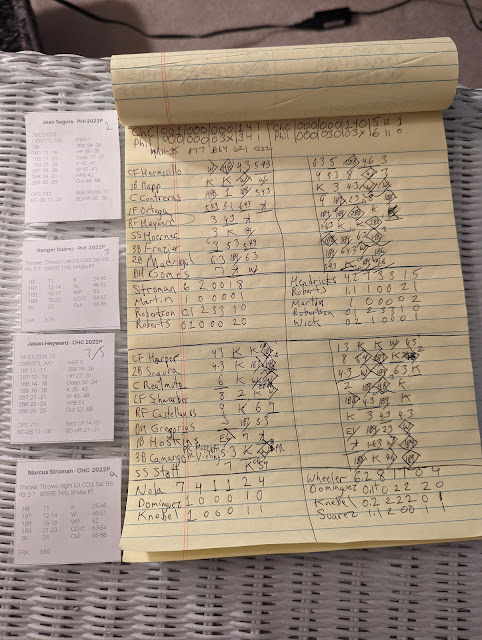