A couple of Statis-Pro items came up in the ChiSox vs. Twins series.

First, I traveled and forgot my board chart on runners taking an extra base hits. I looked it up and am pasting the image below for any time a runner wants to take and extra base on a hit, which several tried during the two games. 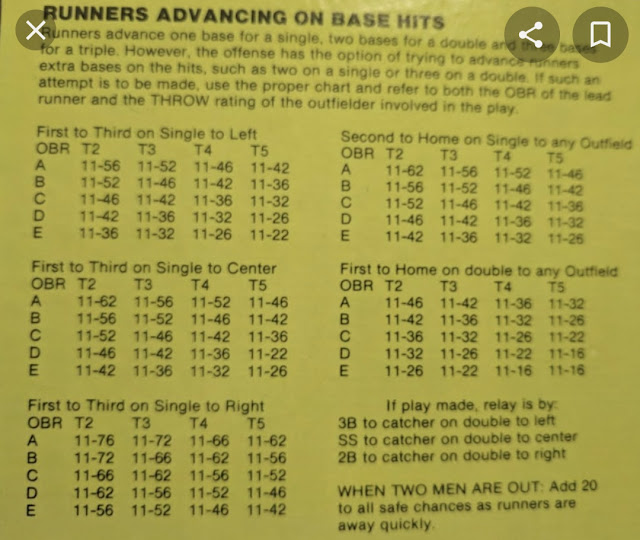 While the inventors originals ranges were pretty neat you need to make two adjustments to be accurate.

The other change to be accurate is that the runner is rarely OUT trying to advance, if he does not advance it usually means the runner held to the same number of bases as the batter.

The runner should only be thrown out if:

This matches the actual modern percentage is 30% takes the extra base, 68% goes only as many bases as batter, and less than 2% thrown out.

The second factor is just a little quirk we play - that every game counts as a 2-1 series win, or a sweep only if the winning team led by at least 5 at the end of 8 innings without their available reliever with the nest ERA used through 8 innings. Teams only do this 14% of the time, same as the chance of sweeping a 3-game series.

With the White Sox awesome lineup but terrible pitching and fielding cards, they may have the best chance of either being swept or sweeping the opponent.

The ChiSox we're in the verge with a 10-5 lead going in the bottom of the 7th but Correa and Polanco singled and if the ChiSox used their PB 2-9 closer Hendriks they would have voided the chance for a 3-game sweep, so Kopech stayed in and Sano hit a 3-run homer. Hendrik saved the wild 10-8 win in the 9th.

The second game it was the Twins on the verge of a sweep with a 4-0 lead in the bottom of the 8th with bases loaded and one out. In that caee the White Sox could use their best remaining reliever (with Hendriks having pitched the first game, Graveman was the best ERA) and he got out of it, though Buxton drove a DEEP drive but it was a"52," and homers occur only on a 11-31 on games in Minnesota. The twins held on for a 4-0 win, so no sweep for either team and the series is a 3-3 split.

As you can see from the game log below the score sheet, only 4 of 24 games.so far have been a sweep in our league play so far. 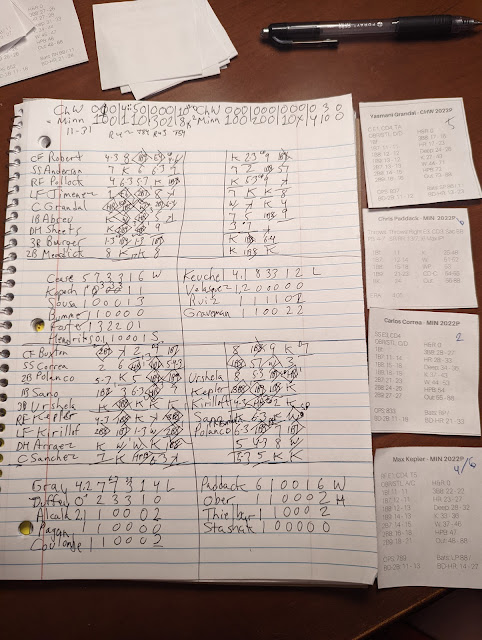