Statis-Pro NL Schedule After Giants Back as 11th NL Team

We still question if the San Francisco Giants can last in the NL playoff race. However, when we updated our Statis-Pro cards for players who dramatically improved or fell short of their projections, it was amazing to see the incredible improvement of the entire rotation, plus Posey's home run range improving from 33-34 to 33-37.
The Giants were one of five teams relegated after Series 6 of the season due to a record of 14-22. We let them go back and play Series 7 and 8 with the updated cards, and an 8-4 mark actually improved them to 22-26 to sneak ahead of the Cubs for 10th place of 11 (see photos of 2 series below).
At that stage we put them back in the mix, scheduling out Series 9-14 with all 11 of these teams playing the other 10, plus four other series against teams that had been relegated in either the AL or NL. While the Cubs are a game behind the Giants by one game in last place, the grid of games shows they are the only team that has yet to play a relegated team and thus gets to pay one in Series 11, 12, 13 and 14. That gives them a big chance to advance, since so far the 11 teams in the league are 85-47 against relegated teams.

The Giants went 5-1 against the Pirates, as Gausman and Wood showed off their improved PB2-9 and PB2-8 cards, allowing only 4 total hits over a combined 12 2/3 innings. 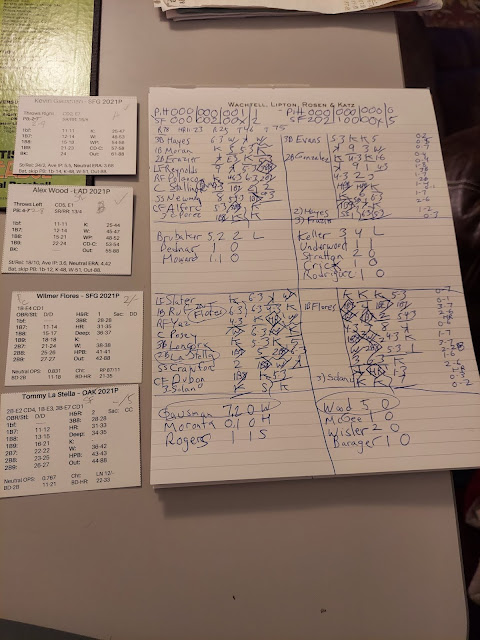 The Giants almost lost the series to the Marlins, but a 3-run rally in the bottom of the 9th inning of the nightcap gave them the split. 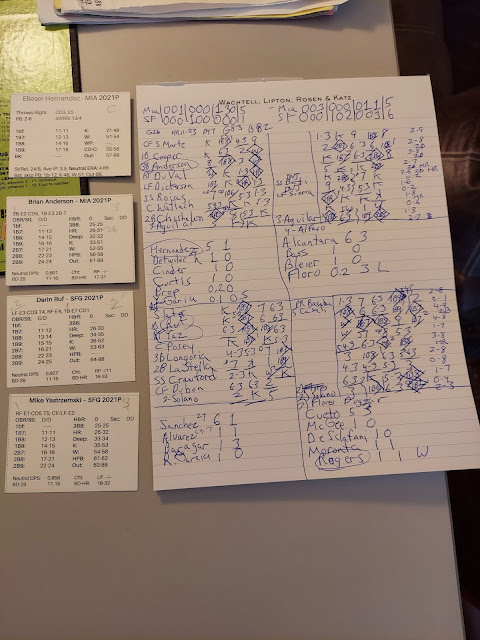 All others playing Relegated teams

All others playing Relegated teams.

Posted by JohnPudner at 7:39 PM