Arizona's stunning great start with their projected cards came crashing down to earth against the Cubs, whose prospects suddenly look great.

After the adjustments for players whose actuql 2021 stats are way ahead of way behind their projected cards, the Cubs have an incredible five relievers with either a PB2-8 (top 15% of all pitchers) or pb2-9 (top 5%) amd that accounted for 6 scoreless innings to let them rally from a 7-4 deficit to 11-7 win in 10 innings.

The Diamondbacks pitching adjustments are the opposite - with only ace starter Gallen even a pb2-7 (above average) and all other starters and relievers now either average (pb4-7) or worse.

The Cubs 8-0 sweep in the first game behind Hendricks complete game - as the Dbacks allowed the Cubs to slug for 57 total bases to only 17 bases on hits for the DBacks.

Baez and Pederson hit three homers each, and contreras and the improved Marisnick hit 2 each, with Happ drawing 4 walks and hitting a homer to give the Cubs 11 homers total.

While the Cubs are 26-28, they have finished playing the 9 toughest opponents meaning the get to play their last 5 series against the teams that were originally relegated and have barely won a third of their games, meaning the cubs would project to go almost 20-10 the rest of the way.

The dbacks look ok at 28-26, but they next play the Mets and Dodgers- two of the top 3 teams in iur league. 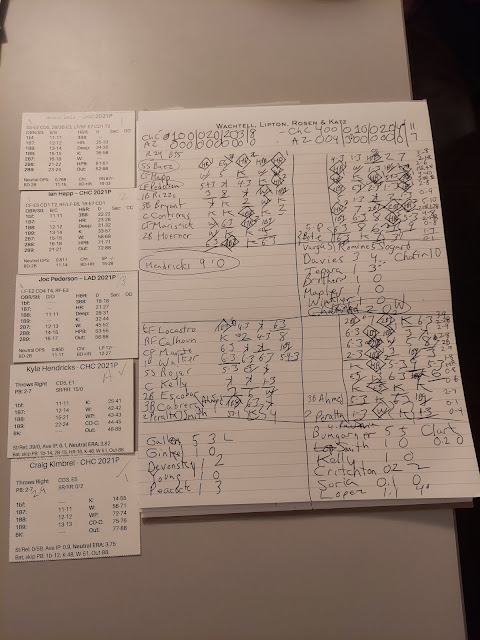 Posted by JohnPudner at 8:41 PM