Part of the reason we like playing the current season with projected cards is to use the actual rosters and see the strengths and weaknesses of each team, and if there are just a couple of injuries holding a team back. However, with teams constantly moving players on and off the roster to the alternate site or a minor league rehab, we do not want to update the roster before each game. Instead, every month or so we run through the following process.

We check the MLB Rosters against our stack of Statis-Pro Cards for each team using the following links:

1. If the card, or a fringe player we already listed on the team card, is on the MLB Roster for the team, we simply check it as a valid card.

2. If not, then we search for the name on the transactions page for the team and if the player is on the team but on the 10-day injured list, on a minor league assignment, or in the alternate camp we leave the player in the stack. If the player is on the 60-day injured list, the are suspended, or we don't e any transaction record during the season, then we put an X in the right hand corner to note we will not use the card in a game.

3. When done checking names on the roster, we look at any name for which we did not have a card or a fringe card listed, we first check the batters or pitchers cards to see if they have a projected card for this or any other team. If not, we look up the player's projected stats at Fan Graphs and note the projected ERA or OPS which will translate for a fringe card to use, and also note if a pitcher throws left or right, and if a batter bats left, right or switch. For example, the sample link is for JB Bukauskas and FanGraphs projects him with a 5.36 ERA which translates to a PB: 2-5 fringe card in our game.

The following are the rosters we are checking for the 10 teams in our NL League.

Arizona Diamondbacks - Taylor Clarke's fringe card (see bottom of blog) gives the Diamondbacks an extra PB: 2-6 starter which gives the option of a 3 inning relief appearance in our game.


Atlanta Braves - The 60-day injury losses of Soroko on the mound and d'Arnaud behind the plate are tough losses.
Chicago Cubs - Both Matt Duffy and Nick Martini give the Cubs extra fringe bats with Home Run Ranges of 26-31.
Cincinnati Reds - Toughest loss is slugger, PB2-8 reliever Mike Lorenzen on 60-day DL so card not used, leading to lots of fringe pitching cards to fill the innings. Jonathan India gives a 26-31 Home Run Range fringe player.

LA Dodgers - The toughest blow for the Dodgers is not being able to use the PB: 2-9 card of former Yankees reliever Tommy Kahnle, who is on the 60-day injured list.

Milwaukee Brewers - Billy McKinney is one of the strongest fringe players with a 26-32 Home Run range for his projected .747 OPS.
NY Mets - The tough break for the Mets is that with Carrasco moving to 60-day DL we took him out of the player cards. Robinson Cano's card already could not be used because he was suspened for the entire year. However, Lugo's card was already a strong 5th starter, so he takes Carrasco's spot in the rotation, and they did add two decent relievers with fring card Drew Smith (4.29 projected ERA is a PB2-6) and better yet the projected card for the Phillies Tommy Hunter (PB 2-7 with only 3 walks, 43-45, on card.
St. Louis Cardinals - Many decent but not great fringe relievers are available to eat up innings when needed.
San Diego Padres - Nice addition in PB2-7 leftie reliever in Tim Hill for his projected 3.63 ERA. Not quite a replacement for the PB2-8 (with hits only 11-21) for leftie Jose Castillo, who we leave out of the game because he is on 60-day DL.
Washington Nationals - Perhaps the most fun fringe player is Ryan Zimmerman, who retired to skip last year but is back slugging, and is tied for the best fringe batters card in our league with a 26-32 Home Run Range for his projected .736 card.
The following is a snapshot of the fringe cards we use based on the batter's projected OPS or the pitcher's projected ERA. 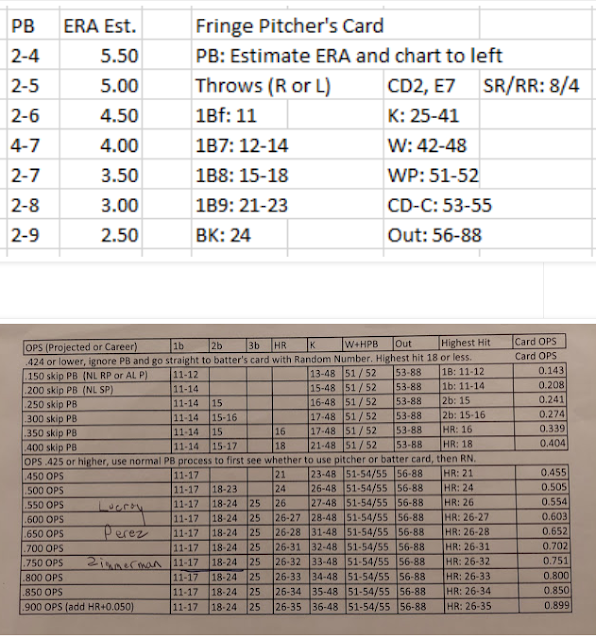 Posted by JohnPudner at 8:09 PM