Scherzer held a 1-0 lead in the bottom of the 8th with two on and one out. His SR (endurance) was down to 1, meaning he would need to leave with the next baserunner or runner allowed.

McCutchen then drilled a clutch batting (BD) homer to make it 3-1 and send Scherzer to the showers, and then it go worse.

Two Phillies relievers game up another 4 runs in the inning to give the Phils a 7-1 lead, one more run then they needed for the game to be recorded as a 3 games to 0 sweep rather than the Nats getting credit for 1 win and 2 losses if the score had stayed 3-1. We record each game as a 3-game series in this way, because on average a team sweeps a series 14% of the time (and is swept themselves 14%) and teams win by 5 runs or more 14% of the time. We use the score at the end kf the 8th inning and the reliever with the lowest ERA (closer for the game) cannot pitch before the 9th to get credit for a sweep).

Former Nat Bryce Harper then homered in the first inning of the second game of Strasburg to give the Phils credit for a 5 games to 1 win in the series. It was the first time all season that q relegated team (Phils, Marlins, Rockies or Pirates from the NL) won a series at least 5 games to 1 against one of the 11 NL teams advancing. On average, when any of the 11 teams play each other the average series (par) is a 3-3 game split. Prior to the Nats loss to the Phillies, the average series against a relegated team was a 4 games to 2 game series - so going 1-5 vs a relegated is 3 games below "par."

Now that all 11 teams have finished 9 series, their grid below shows if how many of 6 "game" they won against each opponent. If an s appears before a number under a certain opponent, that indicates they still need to play that opponent. S10 indicates they will play is series 10 (the next series), s11 means they play in series 11, etc for s12, s13 and s14. The record appears by the team and how many games back each is from the 1st place Mets, and a record to the far right indicates whqt theor record would be if they went 3-3 in every series against one of the other teams on the grid, and 4-2 in every remaining series against a relegated team. 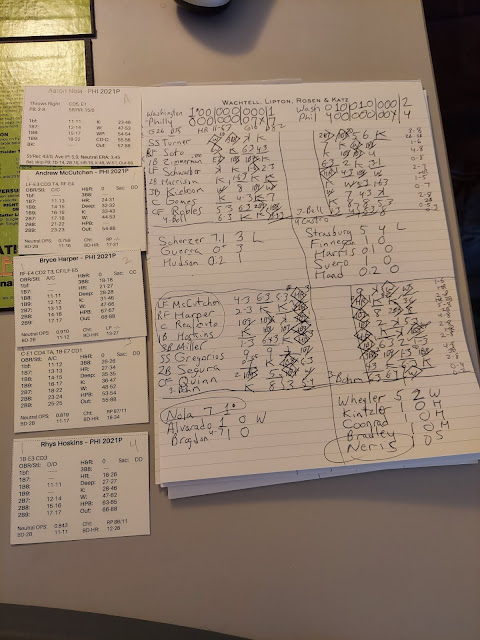 Posted by JohnPudner at 4:37 PM