Some of the 63,700 who have visited our Value Add Basketball Game ask about creating new teams. We created the 2020 anticipated NCAA and NIT teams to play the Covid cancelled tournament, in addition to the 135 All-Time Great teams.

One reader is working on an automated calculation of cards, though it is complicated, so after giving him the script we decided to also post this blog in case you want to manually go through to create one of your favorite teams. The process for teams before the start of the www.kenpom.com era (2002 to present) is simply too complicated to script, so the following process works only for seasons since then.

You first need to access the team you want to create at www.kenpom.com. We've tried to pick the best combos of top players and top teams - but also as often as possible create one for a university that does not yet have a team in the game. We actually meant to create 136 all-time great teams and accidentally did 135 in the first place, so our new 136th team is a new University - the greatest 3-year Cinderella run of the Century led by the only player from a small conference to be the best player in the entire country - Thomas Walkup and Stephen F Austin.

Not only was Walkup the best player in 2016, he was in the best 1% of all players in 2015 and top 5% of all players in 2014, the greatest 3-year span of a Cinderella team this Century. During that 3-year tenure of current Illinois coach Brad Underwood, Stephen F. Austin went 89-12. In 2014 they stunned VCU in the NCAA tournament, then Walkup scored 22 and grabbed 11 rebounds in a 2nd round loss to UCLA. In 2015, the lost a defensive battle in the opening round to the other team we considered for this 136th team - the Utah team that featured Value Add's best player in the nation for 2015 - Delon Wright.

Anyone who doubted if our ranking of 2016 with Walkup as the most valuable player in the country should look at the 2016 tournament. Walkup scored 33 points, and added 9 rebounds, 4 assists and 4 steals in a stunning upset blowout of West Virginia 70-56, then added 21 points despite missing most of the second half in foul trouble as only a desperation tip-in by Notre Dame eliminated SFA 76-75.

And so we present the greatest 3-year Cinderella team of the Century as our 136th Great All-Time team.

2. Get the team's stats from www.kenpom.com and calculate their dunk total. 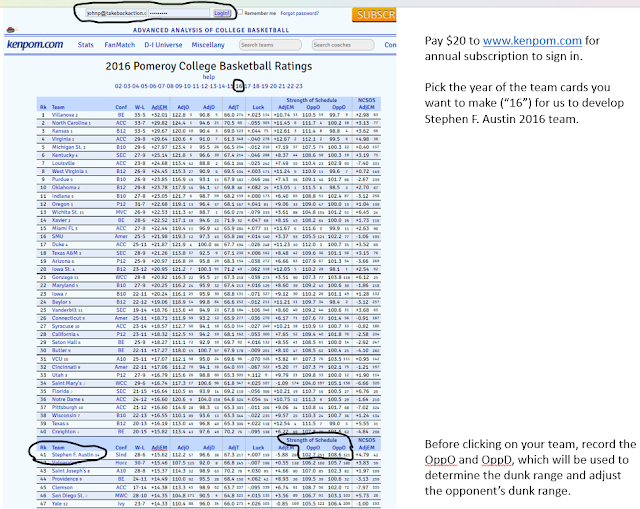 Once you pick your team, find that team at www.kenpom.com. You can see the page above for the first step, then need a $20/year subscription to access the rest of the team data. Under Strength of Schedule record the team's OppO and OppD for calculating the Dunk range in the final Step 13.

Then click on the team to pull up the team sheet and scroll to the bottom to see these player stats. You will need the stats that are circled for the top 10 players. The bottom chart just tells you the best position for each player. 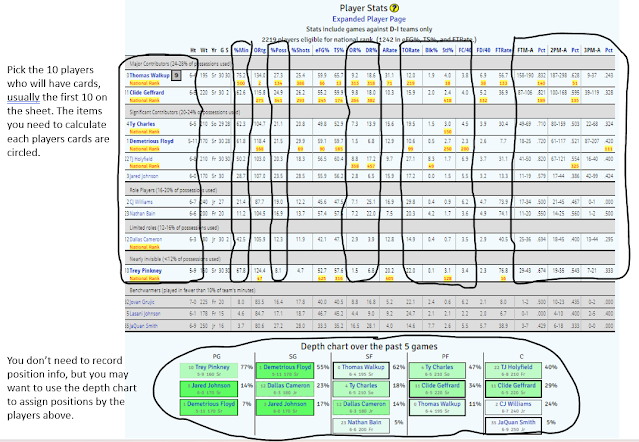 Copy and paste the stats for the top 10 players in the top section above into an excel spreadsheet. Note any shooting ranges that starts with a 1 through 12 will show up as a month when you paste, so just us an extra mark to convert it. Here is what is pasted from the Stephen F. Austin 2016 page.

The column I added to the right is which position each player will play. I use the depth chart Ken Pomeroy provides at the bottom, so when I see Trey Pinkney played point guard 77% of the time, I put a "1" by his line to show he is the starting point guard. The numbers 6-10 I used for backups, so after entering 1 through 5 by players, I put a "6" by Jared Johnson as the backup point card. This is important because it is the order in which the players will appear on the team sheet. Remember, teams are limited to 10 players, so in this cards the players with the lowest percent of minutes played will not be in the game, Jovan Grujic (8% of minutes played), Lasani Johnson (4.6%) and LaQuan Smith (3.7%) will not have player cards.

I also noted in bold or font color what columns we will use to calculate the cards. The other columns are not used and will be eliminated.

3. Delete the columns you do not need. At this point we delete the columns we don't need as well as those players who will not have one of the 10 player cards We also take the columns in red out to the right and convert and rearrange them slightly into 2-pointers and 3-pointers missed instead of attempted, and we divided free throw attempts by 2 for a new figure. After those changes, here is the condensed part of Pomeroy's stats we need to keep.

To jump ahead to the easy part, if a player gets to the free throw line you roll the 20-sided dice and the range is based on the rounded free throw percentage. Walkup hit 83% of his free throws, so we multiply that figure by 20 to get "17," meaning he will make a free throw on 1-17 and miss it on 18-20.

Now to the 20-sided roll before that, when the player first gets the ball and tries to score. In Walkup's case he made 9 three-pointers, 187 two-pointers, he attempted 190 free throws and half of that is roughly 95 trips to the line, he missed 28 three-pointers and he missed 111 two-pointers. Add those together, and he tried to score 430 times. Therefore we divided each of those five numbers by 430, then multiply by 20 to determine how often each thing should happen each time the 20-sided roll comes to him to try to score.

The calculations you see after the "430" figure on that top line create this part of the card.

As you can see, a deadly combination of drawing a foul on 10-14 and then hitting the subsequent two free throws on rolls of 11-17 show some of the reason he dominated in 2016.

This leaves the determination of who gets the ball on a 6, 7 or 8. Once in a while a player has a % possession of higher then 33%, and if that were the case then the player would get the ball on two of the three extra rolls, so if Walkup were that high, then by the "Gets Ball On: you would type 3, 6 & 8."

Since no player is above 33%, we instead take the three starters with the highest possession percentage get the ball on an extra number, so the Get Ball On comes to:

1 - Trey Pinkney (only 8.1% of possessions, so definitely the fewest possessions and only his one number as point guard.

You then to the same thing with the five subs, so 1 & 6 = Jared Johnson, 2 - Dallas Cameron, 3 = Nathan Bane, 4 & 7 - Clide Geffrard, 5 & 8 = CJ Williams. Often a mixture of starters and reserves are in the game. In that case, if you have too many 6-7-8 on players cards you simply choose which three will get on of the extra rolls, and if you do not have all 6-7-8 numbers come up, then if that number comes up then no one gets the ball and you roll a second time, but if any of the three (6, 7 or 8) come up then it is a shot clock violation and the other team gets the ball on a turnover.

Posted by JohnPudner at 3:00 PM