Admittedly the excitement of having my alma mater move into 1st place for best offense in the country this year, I was excited to find one of the most exciting possible offensive matchups for my next Value Add Basketball Game contest.

As noted in the previous blog, we matched up the 1990 Loyola Marymount team that set the record with more than 122 points per game and went Elite 8 despite one of their two superstars tragically dying of a heart attack during a late season game. On the other side we had the 1989 Illini whose whole team including the back-up seemed to nail alley-oop dunks every couple of trips.

In our score tracker, Loyola had destroyed 1970 Kentucky 138-116 and then fallen just short against another blue blood program, 101-104 against UNC 1998. Nick Anderson's Illini was stunned 82-86 by the 2021 Colorado team, but rebounded with a big 74-68 win over 1981 Notre Dame. The two game in needing to 74 possessions instead of 44 due to their frantic paces - and they were ranked 41st and 42nd as the two highest ranked teams with fewer than three games played.

Below the list of top scoring teams this year, we run through the phases of the game with the scoresheet with tips for if you play a game between high paced teams that requires playing more than 44 possession.

Rotation ideas for high possession games
Because Loyola's cards say to add 26 possessions and the Illini add four, we have 30 extra possessions to simulate the pace of play of these two teams. Keep in mind each game starts with the assumption 22 possessions were already played to get to a 20-20 tie, so this is like a 98 possession game.
When I have extra possessions, I let the top line starters play half of the extra possessions, then the bottom line reserves play the next half, then when I get to 44 left I use the rotation based on stamina. Note the extra possessions before the 44th possession, and the overtime possessions do NOT count against the Stamina on each player's card.
Possession 74 to 60 with starters on court
With the starters for both teams on for the first 15 possession, the Illini turned the ball over the first six possessions, five by Loyola steals, and Loyola streaked to a 30-20 win on a 10-0 run off the steals.
The Illini starters stopped the bleeding, but still trained 38-30 when they turned it over to the reserves.
Possession 59-45 with reserves, including half ending at 48th possession
The Loyola reserves could not keep up the pace, giving up a 10-14 run by the half to see the score tighten to 44-48 at halftime. I wrote the half time stats at the bottom of the sheet. By then the Illini had also turnover Loyola and trailed the turnover battle only 17-14 as both teams found the best way to stop the opposing high powered offense as to steal the ball from them before they could shoot.
Normal 44-1 Possessions on New Score Sheet
Once the extra sheet was finished, we go to the normal rotation at the bottom of the sheet. During the final 44 possessions, both teams only use six players - the five starters on the top row and then Loyola's Tony Walker rests the shooting guard Terrell Lowery from the 44th to 29th possession, and Illinois Steve Bardo rests several starters throughout the half - and had to come back in for the final few possessions when Kenny Battle fouled out.
Nick Anderson started this sheet with two straight buckets while drawing fouls, and then another basket to go on a personal 7-2 run and cut the lead to 52-51 with 42 possessions to play. The game went back and forth until Kenny Battle stole a pass and took it all the way for a fast break dunk with 17 possessions left to make it 80-78 Illinois.
But down the stretch it was Kendall Gill, the shortest player on the team at 6'5" while Marcu Liberty was the tallest at 6'8", who took over the game.
Gill had a rare blocked shot with 10 possessions left that would have been a tiebreaking basket, and was fouled at the other end and hit a free throw to make it 86-83.
Then the backbreaker for Loyola. The late great Hank Gathers grabbed an offensive rebound with nine possessions left, but Giles stole if from him and raced down to hit a 3-pointer and make it 89-83 Illinois. Loyola scored, but Anderson then had his third "and-one" old school 3-point play to make it 85-92 and the Illini held it about there throughout for a 105-98 team and became the first team to hold Loyola below 100 points.
The two Loyola superstars and best friends from childhood certainly shown bright:
Bo Kimble - 25 points, 9 rebounds and most amazing 7 steals
Hank Gathers 22 points, 10 rebounds
It was the 1, 2 and 3 spots (PG, SG, SF) for the Illini who dominated:
Kendall Gill 26 points, 3 steals
Nick Anderson 21 points, 5 rebounds, 5 steals
Kenny Battle 19 points, 7 rebounds, 2 steals 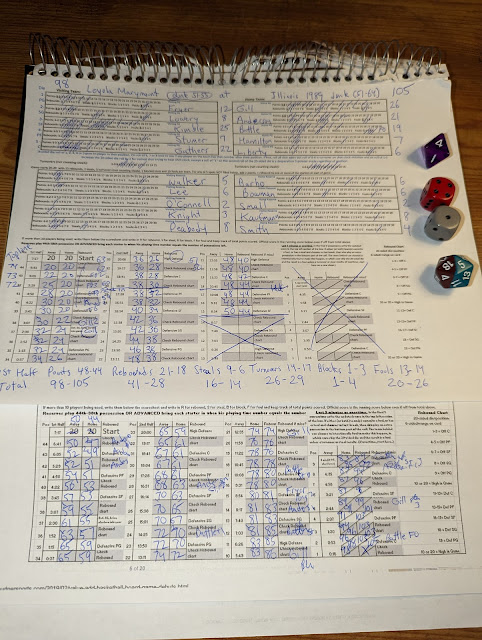