We made the heavily favored Michigan 1965 travel for the debut of the 2016 Stephen F Austin, and what we played was the biggest home job to date in our Value Add Basketball Game.

To document the home job - in the Value Add Basketball Game if a team is designated as the home team (vs. just a neutral site game) then we write "at" on the center of the scoresheet. The home team has the option of flipping the result of any roll of 36 or 66 - which gives them 2-3 calls a game and simulates the normal home advantage - but this was ridiculous.

Bad Call 3 - with 7:40 (13 possessions) to play, Oliver Darden scored to give Michigan a 69-66, but he was also fouled while scoring and the foul was missed.

Bad Call 4 - with 4:35 (8 possessions) to play and SFA leading 73-72, the refs unbelievably made another bogus call against Buntin this time fouling him out of the game. In the next two minutes (to the 2:44 mark or 5 possessions to play) with Buntin on the bench, SFA went on a 13-5 run to seemingly put the game away 86-74.

We could have played the game in Crisler Arena - known as the House Cazzie built - but wanted to give SFA a longshot chance of an upset like they pulled in two March Madness tournaments. In our rankings we do give teams credit for playing on the road. But the 86-74 lead led to ... (see below scoresheet) 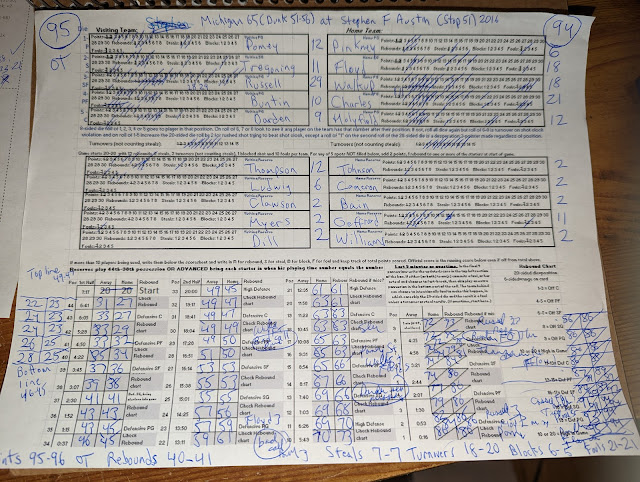 The biggest comeback we have witnessed in all our games. Michigan went on a 5-0 run by the 1 minute mark, then the player who would go onto be the National Player of the Year and No. 1 pick in the NBA draft the next year, Cazzie Russell, hit a 3-pointer to make it 86-82 .

George Pomey then made the play of the game with a steal, which by giving the chance at a fast break saves time and lets the team on the fast break use the bottom triangle on the same row in addition to lowering the 20-sided die 1 number for a better chance at a shot. Pomey hit John Thompson with a pass on the break and Thompson finished to make it 86-84.

Pomey then made a mistake and fouled Demetrious Floyd, a 70% or 1-14 free throw shooter, but Floyd missed both free throws to leave the score 86-84.

Pomey scored at the other end to tie the game 86-86 and then after a miss at a would be game winning buzzer beater, Pomey grabbed the rebound to end regulation with Michigan having completed an incredible 12-0 run in just 2:07 to extend the game.

Cazzie finally Wins Battle of Players of the Year Vs. Walkup

The game was as special treat because it featured Cazzie - who would be awarded Player of the Year the next year before being drafted first to go to the NBA, where he won a world title - against Thomas Walkup, who is the only player from a smaller conference to ever be calculated as the best player in the country by www.valueaddbasketball.com.

Since both are the "3" in the game as small forward, they were guarding each other - a big concern for Michigan because Walkup draws so many fouls (on 10-14). While Russell only draws fouls on three numbers (9-11) he does get the ball more as one of the few players who get the ball 37% of the time in the game (on rolls of 3, 6 or 7 on the 8-sided die).

With 1:30 to go in overtime, he finally won an epic battle by drawing a 5th foul on Walkup while Michigan trailed 89-92, and hitting both free throws to finish the night with 29 points, 10 rebounds and three blocked shots. Walkup was almost as impressive with 19 points, 13 rebounds and two steals, but SFA's thin bench could not pull it out with their star on the bench, as Cazzie's two free throws started a 6-2 run for the 95-94 epic come from behind win.

The matchup seemed to be a decent one for SFA, with a front line of only 6'4, 6'5 and 6'8 and a weak rebounding team. However, Michigan's team - which had the bad luck of this incredible team during John Wooden's run of titles at UCLA  so only finished National Runner-Up - was not much bigger at 6'5, 6'5 and 6'8.

Posted by JohnPudner at 2:11 AM