We set up four blogs to track the results of our tournament between these 30 new all-time great basketball teams in the Value Add Basketball Game.

The No. 1 teams from 1980 and 1987 clashed in our opening round. Perhaps fitting for a UNLV game, the first dice (opening tip) were rolled at 1:10 am and the game finished at 1:45 am - 35 minute play time. Some history first on the two teams No.1 ranked seasons without a title:

Both DePaul and UNLV went into their actual March Madness those years with only a single one point loss. UNLV finally lost in the Final 4 to Bobby Knight and Indiana. 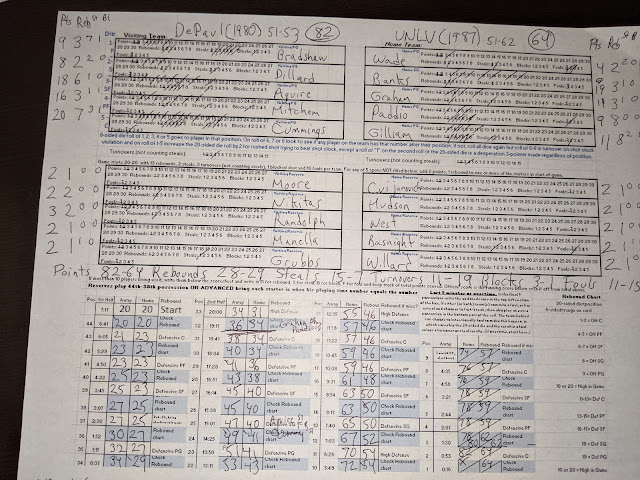 DePaul had already beaten defending national champ Louisville but suffered one of many stunning tournament upsets with St. Joe's using tactics that would have not worked with modern rules (see account of game here).

That season St. Joe's slowed it down with no shot clock in effect and used a late foul of Skip Dillard to force a 1 and 1 (there was no double bonus) and when he missed the front end St. Joe's beat the buzzer for a 49-48 stunner.

In this VABG game it was DePaul pulling the upset with Clyde Bradshaw completely disrupting the UNLV offense with 7 steals that led to transition baskets at the other end from one of the greatest duos to ever play the game - Mark Aguirre and Terry Cummings - the player of the Year and future NBA Rookie of the Year respectively.

Here is Kareem's card for the No. 1 seed UCLA who is the team to beat in this bracket. 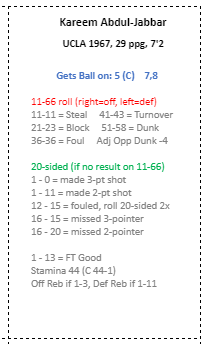 Here are 1st round results and match-ups from the MIDWEST - 3-seed Kansas (Paul Pierce) BRACKET, and at the bottom of all 4 blogs you can click on links to the other three brackets.

Here are the links to all 4 brackets.