Scherzer Strong for Nats After Trade News, But BoSox ...

After turning our focus to college basketball, news of Max Scherzer's trade to the Mets seemed a good reason to get Max Scherzer on the mound to see if the Dodgers could beat the Red Sox for the Statis-Pro Baseball World Series. Click here for photos of all Statis-Pro player cards being used in the series.

It just so happened this year that the two things to make it through the 30-team Statis-Pro season to our simulated World Series were the two teams who fell one step short in real baseball. Therefore this season was a bit of a "what if" consolation series like the old days when a consolation game was played between the two losers of the Final 4 games. 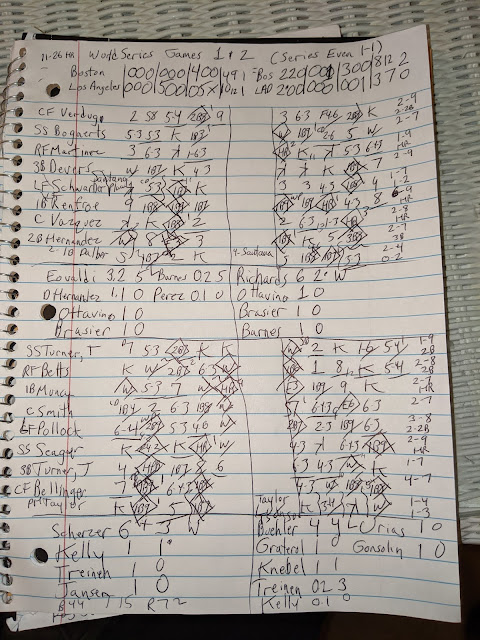 Garrett Richards went 6 innings with only 1 earned run allowed in Game 2 to even the series heading back to Boston.

The hitting star of the first two games was former Tampa Bay Ray Renfroe, who has hits in six consecutive at bats culminating in a home run.

While Scherzer took a 5-0 lead into the top of the 7th, Santana (who entered the game on a double switch), Renfroe and the Vazquez chased him from the game with three straight singles. Vazquez was the one change we made from the AL Commissioners Red Sox line-up just to get his throwing arm (TA) in the game due to the speed of Trea Turner and Mookie Betts at the top of the line-up.

With bases loaded, set up man Kelly was brought in an inning earlier than we usually use him to quell the fire, but things simply got more dangerous.

Kelly induced a grounder to 1st, but Muncy misplayed it to keep the bases loaded and pull the Red Sox within 5-1. after catcher Smith made a great clutch defensive play for the first out, Verdugo doubled home two more runs, and then Bogaerts' infield single made it 5-4. Kelly then induced a 1-6-3 grounder to end the inning with a 5-4 lead, and Muncy later made up for his error with a grandslam homer to cap a 5-run bottom of the 8th and give the Dodgers a 10-4 win in Game 1.

Richards six inning gem to outduel Buehler (4 innings, 4 earned runs allowed for the loss) was made even more amazing by the fact that he contributed at the plate as well. Like most AL starting pitchers, Richards only gets a hit on 2 of 64 possible numbers, a Random Number of 11 or 12 from the 11-88 possibilities.

The Red Sox jumped on Buhler early with a 2-run homer by Martinez in the first, and then singles by Renfroe, Hernandez and Bogaerts, with the help of a sacrifice bunt for Richards to amke it 4-2 after two innings.

In between the two 2-run innings, the Dodgers scored two in the bottom of the 1st. Richards did not look on the path to a gem when he walked Turner, who stole second, then gave up an infield single to Betts. Muncy then reached on an error to Renfroe, who was as bad in the field at 1st base as he was good at the plate. Smtih hit a sac fly,and Pollock doubled to give Richards two runs allowed with only one batter retired, but he would throw shutout ball the rest of the way to leave with a 5-2 lead after six innings.

Vazquez 3-run homer in the top of the 7th just about sealed the win at 8-2, through three of the 1st four Dodgers to bat in the bottom of the 9th inning reached off closer Barnes, who was back on the mound to regain confidence after being shelled in Game 1, and they did get one run across to make it an 8-3 final.

The Red Sox now have the pitching edge with Chris Sale (a PB2-9) slated to start Game 3 in Boston and therefore also slated for a deciding Game 7 if needed. The games in Boston will also include a DH, which lets the Red Sox put their normal line-up in place, but also lets the Dodgers bat Chris Taylor as DH rather than simply pinch hit.