In looking through the tournament for the new 30 all-time great teams we are creating, one match-up caught our eye that gave us a reason to add the new tempo variation to the Value Add Basketball Game as we debut easier to read cards (8-point font vs. the original 6.5-point font cards). Click here for the 30 new teams.

Paul Westhead convinced stars Hank Gathers and Bo Kimble to transfer from USC for his fanatic paced offense, and they made Loyola Marymount the highest scoring team in history. Kimble also set the mark for a player with 1,131 points that season, and amazingly Gathers might still hold the record for second most points scored in a season if he had not collapsed and tragically died of an irregular heart condition in the conference semifinals. Who knows if 11th ranked Loyola could have gone further in March Madness.

Twenty years earlier future NBA star Dan Issel did not play quite as many games, but he averaged 33.9 points per game to keep Kentucky ranked between 1st and 3rd all season. They scored 100 points in both NCAA tournament games, but were stunned in the second round 109-100 by another team we just added to the game, Artis Gilmore's Jacksonville.

While tempo stats were not available until this century it appears they played about 85 possessions per game - one of the highest totals in history. 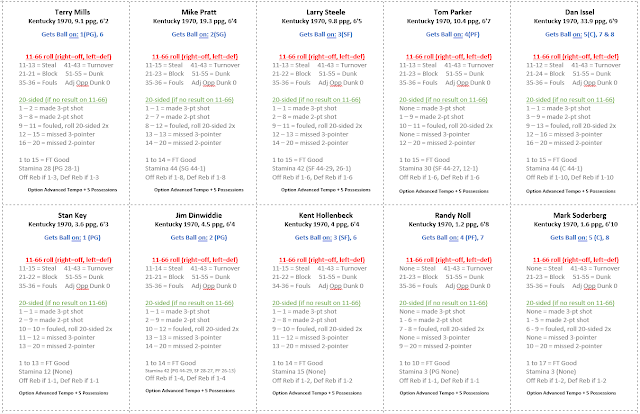 We estimate Loyola Marymount averaged 106 possessions per game, which is clearly the fastest pace in history. 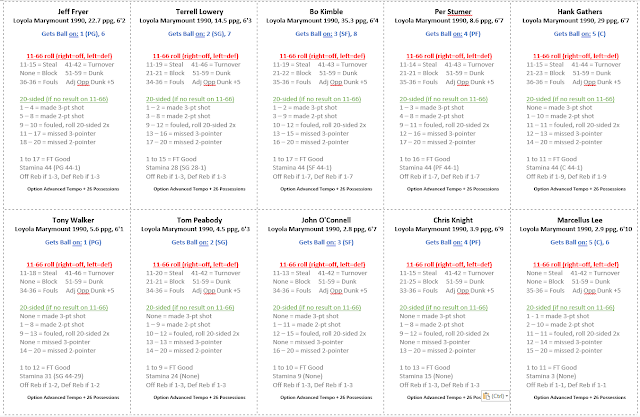 All Value Add Basketball Games last 66 to 75 possessions, depending on how many of the last nine possessions include a foul or steal and fast break. Normally that works best for simplicity of play, and we don't really want to play fewer possessions for early teams. However, an optional adjustment we are adding to the game is that if a team averaged more than 80 possessions per game, they get a note on the bottom of the card - on the Kentucky cards above a +5 and on the Loyola cards a +26, and using an extra score sheet you add possessions totaling that number - and if both teams are high pace you add them together.
In this case, we will need to play an extra 31 possessions on an extra scoresheet before going to the 66+ possessions that would normally be an entire game, to complete this tournament game.
We will add the results after playing the game, but in the meantime, here is a list of schools that would have the + possessions line on the bottom from the new teams and from the teams we know played more than 80 possessions since the stats were kept at www.kenpom.com.
Only two teams have done it this century - VMI and Savannah State - and they have both done it twice. The official high mark is VMI in 2007 at 90 possessions a game. Our estimate is that three new teams in our 30 team tournament matched or exceeded VMI's pace. In addition to Loyola, we estimate the Miami of Florida team in 1965 averaged 98 possessions per game and the Jacksonville 1970 team matched VMI at 90 possessions per game. Here is the complete list, and we will add the result of Kentucky vs. Loyola Marymount once done.

Posted by JohnPudner at 8:36 PM