You can now click this google doc or this pdf to open and print the improved cards for 128 all-time great college basketball teams for use with the free Value Add Basketball Game.   You can still use the original 98 teams still  just tried to make the cards easier to use as explained below. Yes, it took a long Thanksgiving weekend away from the office to get it all done :-) and I hope you all had a great Thanksgiving. 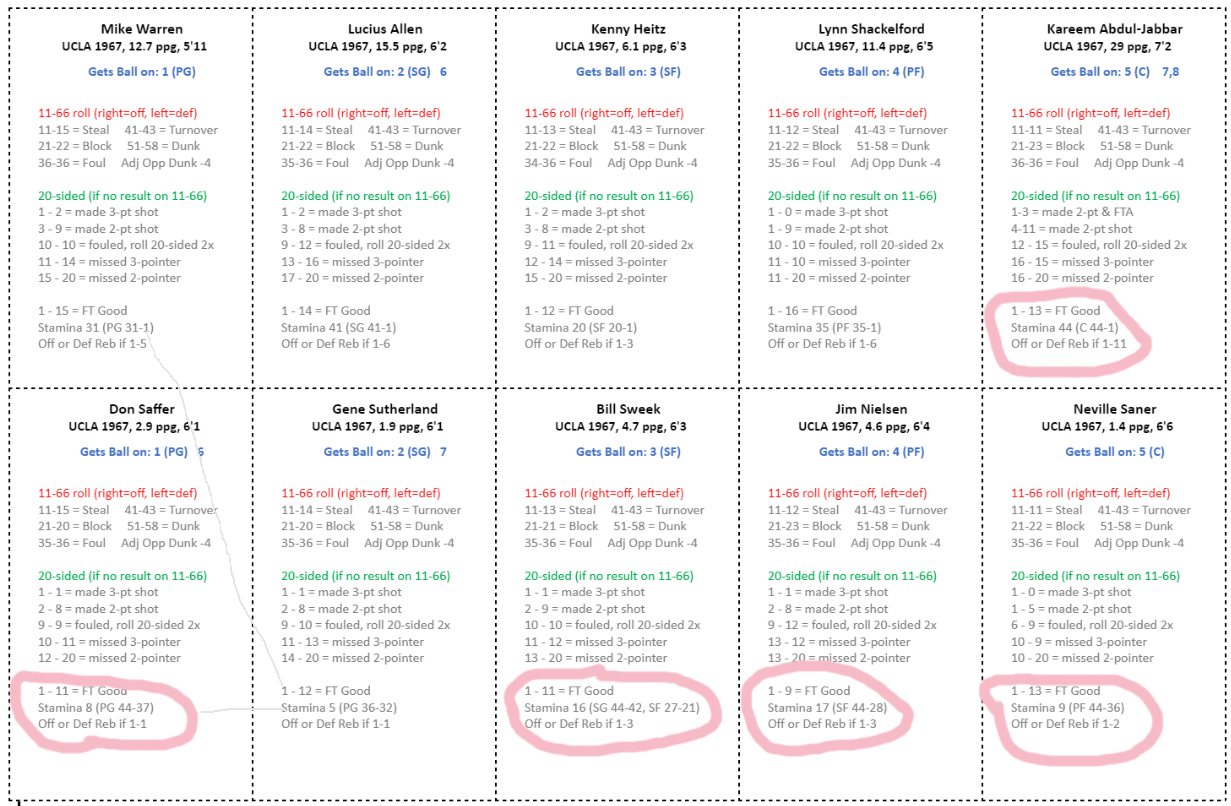 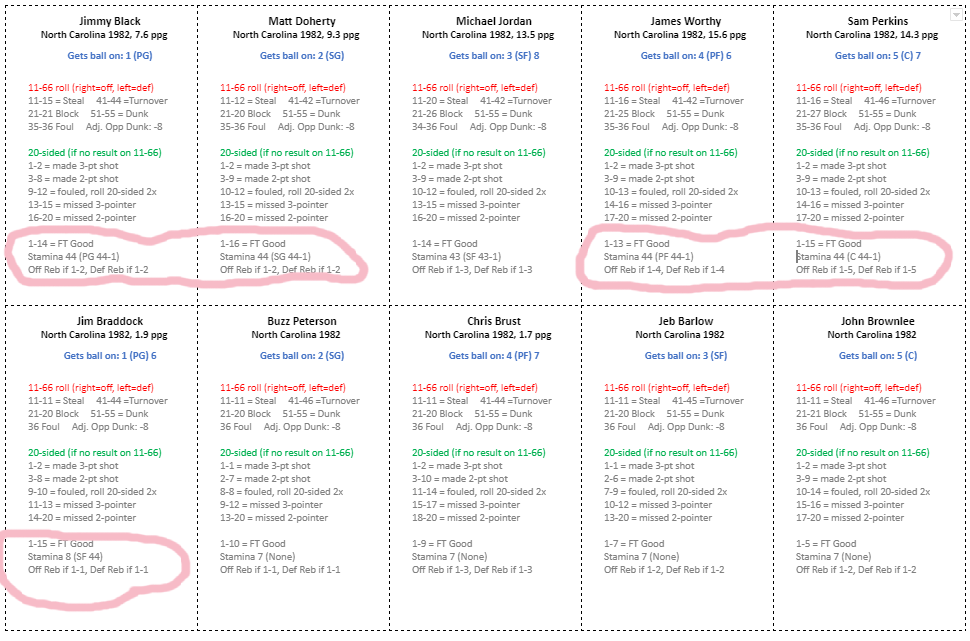 1. The time consuming part of the improvement to the cards was adding suggested playing time by position for all 10 players on all 128 teams. We already listed the Stamina, for how many of the 44 possessions a player could be used - but now we have the actual suggested possessions.

The teams are set up so that the five recommended starters are the top row for each team, so for the final part of the game you can just look at the top row unless someone fouls out or you make a strategic change. However, we circled the players who would actually be in for the 44th possession to begin the game if Kareem's UCLA played Jordan's UNC. Jordan is actually the only UNC starter would would rest one possession (the 44th) and then all 5 UNC starters would be on the court for the rest of the game. However, for UCLA Kareem is the only starter who would be in the game for all 44 possessions, with the other players beginning the game circled.

However, we start the game with reserves on the court. On the UCLA 1967 team I have circle the suggested playing time for each player when the game begins with "Possession 44" (counting down to the final "1" Possession).

You will note that Kareem is the only "starter" we have circle to begin the game because his Stamina rating is 44, meaning he can play the entire game (all 44 possessions). However, none of his teammates can, so we circled each player we suggest "starts" in the game with a "44-" some number.

For example, at the bottom of Don Saffer's cards, we inserted "PG 44-37" to note that we suggest using his 8 possessions (Stamina 8) to put him at point guard from the 44th to the 37th possession.

We added a light pencil mark to point to the mark at the bottom of Gene Sutherland's card, where our "PG 36-32" indicates we suggest he takes over at point guard for those 5 possessions.

Another pencil mark points to the actual starting point guard Mike Warren, where the "31-1" indicates we suggest he plays the final 31 possessions of a game at point guard.

These are suggestions, and you can play any player whenever you want. Just keep in mind if a player plays more possessions than his stamina, then every die roll involving him his adjusted by 1 to hurt him. So if you used Warren the entire game, then he would run out of Stamina for the final 13 possessions of the game. During that time, he would only steal on 11-14, block a shot on 21, he would foul on 35 or 36, he would turn it over on 41-44, his dunk range would drop to 51-57 and adjustment to his opponent's dunk range would be only a -3. On rebound he would only get it on a 1-4, and then all 20-sided shots would be adjusted by 1 - so only a 1 would be a made 3-pointer, a 2-8 a made 2-pointer, a 1-14 a made free throw. If someone more than doubles their Stamina (if Heitz played his 40th possession despite his Stamina of 20) then all die rolls adjust by 2.

2. Another adjustment we made was to increase the font size from 6.5 to 8, which seems to make it easy to read even when I play a game while walking on the treadmill desk.

3. One final note is the top line under the green "20-sided" die line, where the best result is "made 3-pt shot," in most cases. In 1967 there was no 3-point line, so we have used various methods to estimate if a player likely put up jump shots that indicated he could have taken advantage of the 3-point line. You of course have the option of playing a game without a 3-point line and just counting all shots as 2-points - and all cards are accurate within 2% of a players actual field goal percentage except for a few cases where missed shots were not recorded. Players overall value comes out correctly because of an adjustment to the dunk range that is better if he has slightly fewer estimated 3-point shots or vice versa.

However, one thing we do know is that in earlier years centers like Kareem, Bob Lanier, Bill Walton and others in the game clearly did NOT take any 3-point shots and thus do not have any numbers there. However, note on Kareem's card that some of these great centers instead have a top line on which they make a 2-point shot and are fouled - meaning they will go to the line to try for a 3-point play.

These should be all the updates for a while as - like most of you - I head back to work in the morning. Enjoy!

Posted by JohnPudner at 7:11 PM