Click here for Games 1 through 4 of the Best of Seven Statis-Pro World Championship between Venezuela and the Regular season champion Dominican Republic. Click here for the regular season run down and season MVPs (top 10) and Cy Young (top 5). Learn to play Statis-Pro Baseball in 5 minutes by clicking here.

Below we will fill in the game-by-game account and scoresheets of Games 5, 6 and if necessary 7 to determine the best team in the world..

After six scoreless innings, each team had one hit apiece and Statis-Pro Cy Young Award winner Danny Salazar had lowered his ERA to 0.64 with two runs allowed in 28 innings in which he struck out 31, while Cy Young runner up Carlos Carrasco had an 0.91 ERA through 29 2/3 innings during which he allowed three runs and struck out 33.

The incredible Dominican Republic line-up finally broke the dam in the top of the 7th against Carrasco, when Polanco walked, Soto singled, and then Ozuna delivered the all-time clutch double to clear the bases and chase Carrasco with the score 2-0. With Carrasco gone and a couple of relievers resting from performances in Game 4 that tied the series, the Dominican Republic feasted with eight hits in the 7th and 8th innings alone to win going away 7-0 and take a 3-2 series lead. Carrasco finished with a 1.51 ERA due to the two runs. 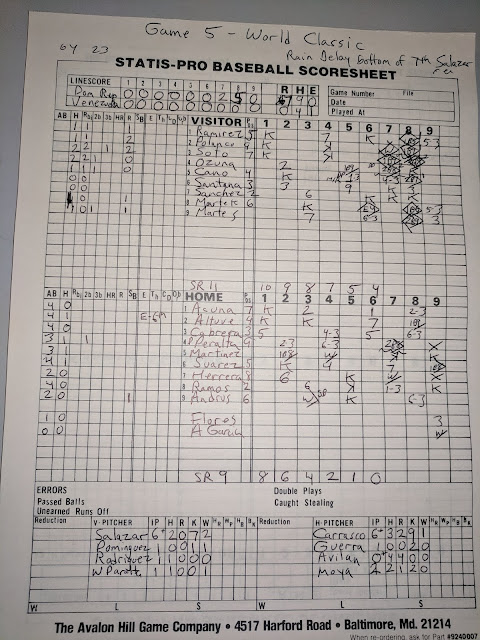 Statis-Pro International MVP Jose Ramirez singled in each of the first two innings, scoring once then driving in two more to take Venezuela to the brink of elimination in the best of seven. Only Jose Altuve's clutch diving catch ended the second inning with the Dominican Republic leading 3-0.

Venezuela rallied with a Jose Martinez blasted a 2-run homer and Eugenio Suarez followed with a clutch 3-run homer in the sixth to give Venezuela a 5-3 lead. Another great defensive play by Altuve ended the bottom of the 6th.

Gold glover Ramirez bobbled a grounder and David Peralta doubled to give Venezuela the chance to break the game wide open in the top of the eighth, Jose LeClerc induced two infield pop ups and registered a strike out to hold Venezuela to the 5-3 lead.

After two strikeouts and a walk in the bottom of the 8th, Venezuelan shortstop bobbled a potential inning ending ground out. Pinch hitter Maikel Franco then ripped a double on a random number of "23," which I mistakenly thought was a homer at first because I was looking at Carlos Santana's card. Marcel Ozuna scored to tie the game 5-5.

In the 10th inning, Franco was the hero again, grounding a one-out single through a drawn in infield to score Eloy Jimenez and end the championship series with a 6-5 Dominican Republic win. 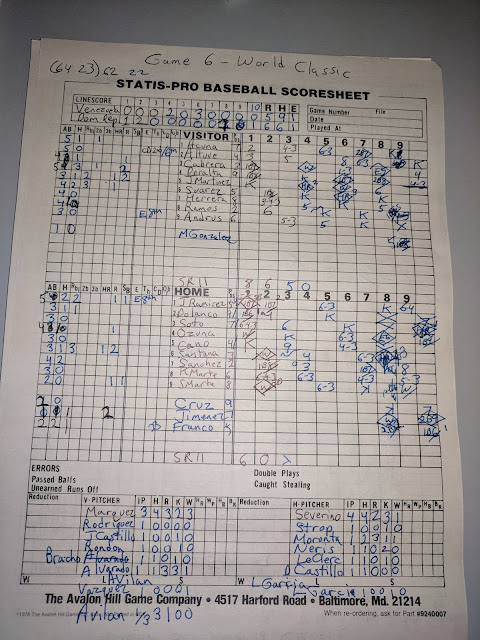 Posted by JohnPudner at 8:02 PM