The following is the final standings from the Statis-Pro baseball Board game round robin and a paragraph summary of the season, followed by the scoresheet and summary of each game of the Best of Seven playoff between the regular season champion Dominican Republic and second place Venezuela. Learn to play Statis-Pro Baseball in 5 minutes by clicking here.

The paragraph wrap up of the season is at the bottom of the blog, with the details on the series  moved to this blog.

Ronald Acuna Jr threw Marcell Ozuna out at home in the 1st to keep Venezuela within 2-0, then Acuna doubled in the 5th And scored on a Jose Altuve 2-out single to tie the score 2-2.

In the 6th, David Peralta doubled and scored the game-winning run on a Jose Martinez single to give Venezuela a 3-2 win and tie the series 2-2.

The Dominican Republic delivered 11 singles and drew 6 walks, putting men on base in every inning but the 6th, but never scored after Acuna's throw from left field in the 1st inning.

Acuna finished 2nd in season MVP voting (see below) to Jose Ramirez, who singled and took 2nd base on a bobbled throw on his steal attempt. Ace left-handed reliever Felipe Vazquez pitch out of the jam despite a parade of great right-handed pinch hitters.

Statis-Pro Cy Young winner (see below) Danny Salazar takes the mound for the Dominican Republic against Cy Young runner up Carlos Carrasco in the crucial Game 5 with both teams' needing two more wins to claim the series.
M 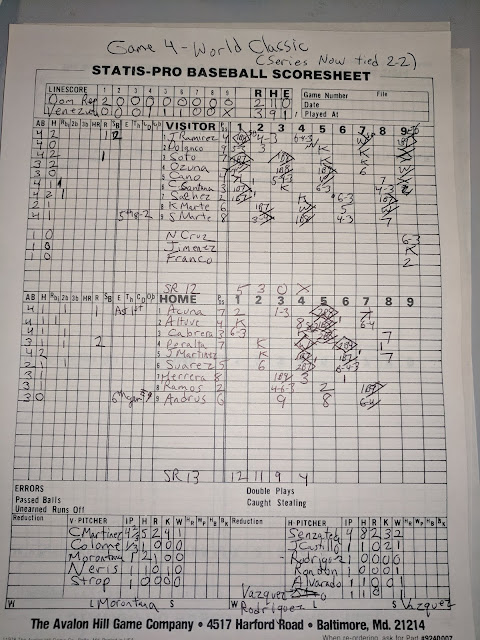 We nnounced the Cy Young and MVP Awards based just on the 10-game round robin - where anything can happen.

We did put weight on three incredible fielders to put them at the top of the list.

Venezuela's top ranked pitching (2.8 runs per game allowed) held Dominican Republic's top ranked batting (6.2 runs per game) in check for seven more innings before speed and experience exploded. Speedster Ketel Marte stole three bases and drew a wild pickoff throw, but was left in scoring position three times - but in the 8th he went to third on a single by Jose Ramirez to chase Venezuelan Eduardo Rodriguez. Venezuelan set-up man Silvino Bracho came in to try to protect the 1-0 lead, but retiring Albert Pujols pinch hit for his first at bat of the series, executing a perfect hit and run single behind Ramirez breaking from first base to tie the game and start a 4-run rally. Dominican and Reds Juan Soto, who we project to have the best park-neutral OPS in the series at 0.900, was on the bench due to lefty Rodriguez starting, but delivered a pinch hit double after Pujols.

Venezuela did not go easily in the 9th, as Jose Altuve and Jose Martinez both doubled around a walk drawn by David Peralta, who scored for the second time after homering in the seventh. Rightfielder Gregory Polanco overran the 2-run double to let Martinez get to third base and put the tying run 90 feet away, but Diego Castillo induced a popout by pinchhitter Asdrubal Cabrera to wrap up the 4-3 win and give the Dominican Republic a 2 games to 1 lead in the best of 7. Next up Carlos Martinez (4.21 projected park neutral ERA) takes the mound for the visiting Dominican Republic against the Rockies Antonio Senzatela (3.84 projected ERA if he did not have to pitch in Coors Field) in Game 4. 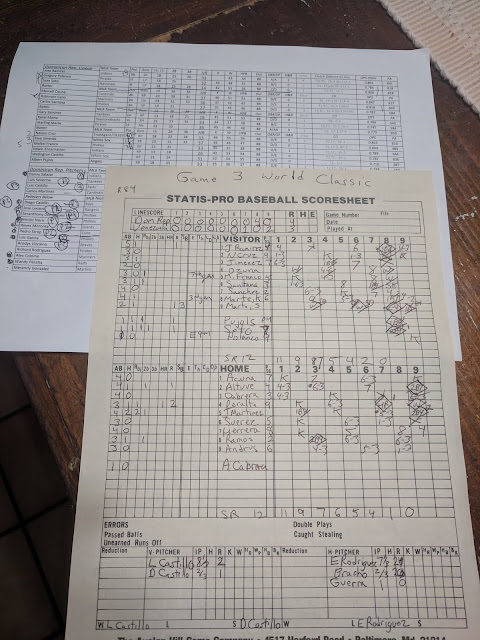 Severino out dueled Marquez with the help of four relievers to tie the best of 7 Series. Ramirez was the hitting star again for DR, using his speed to score after singles in the 1st and 5th inning. In the 1st he stole second and raced home on Soto's single to make it 1-0 DR. Venezuela's Suarez homered in the second to tie it 1-1. Ramirez' single in the 5th moved K Marte to 3rd, and when Polanco drive a deep drive to rightfield to score Marte, Ramirez raced to second, finally racing home on another Soto single. Despite their top relievers resting from Game 1, the deep DR pen allowed only 1 hit in four innings of relieve to wrap up the 3-1 win. 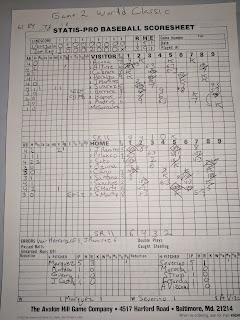 Cleveland Indians' starters Carrasco and Salazar threw competing shut out gems, and Venezuelan closer Vazquez struck out Soto and Ozuna with Ramirez on third with the winning run in the bottom of the 9th. With both teams' top relievers spent, Acuna drilled a 3-run homer off Neris in the top of the 10th to give Venezuela a one game to none lead over the regular season champions in the best-of-seven. 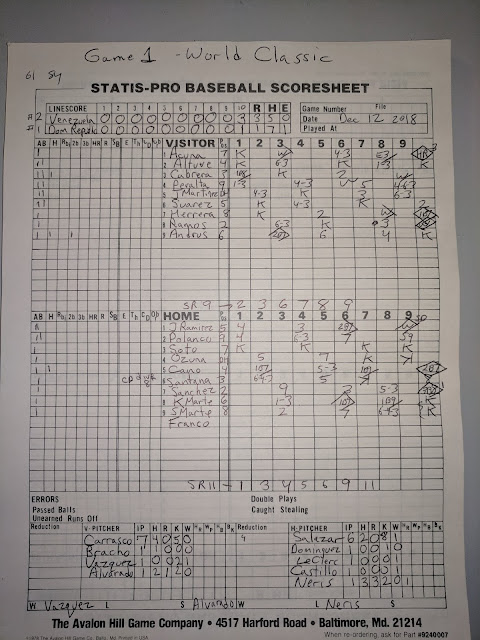 The Dominican Republic ran away with the regular season to claim the World Pennant by scoring twice as many runs as they allowed, making the real competition to see who would finish second to play them in a series. While Canada and Cuba finished 5th and 6th, they had the most exciting batter (Canadian Vlad Guerrero Jr.) and pitcher (Cuba's Chapman allowed only an Altuve single in 20 batters faced).  . Venezuela finally took second when they beat Cuba and Japan eliminated Puerto Rico in the final game of the season. The blogs on the regular Statis-Pro season as well as the real-life tragedy of the real-life deaths of Venezuela has all been moved to this blog.