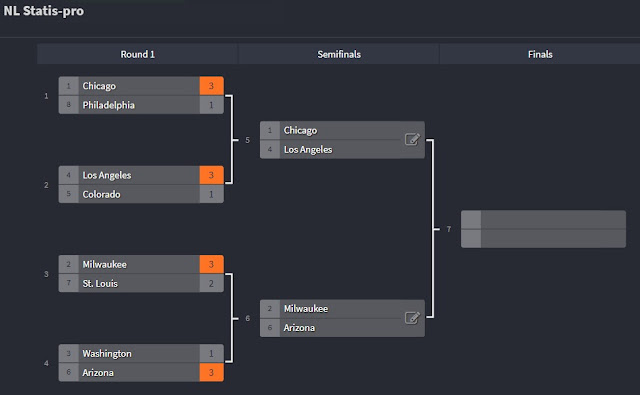 (Set up through this bracket creator)

The Chicago Cubs seek their third straight NL Pennant and second straight World Series (see 2016 and 2017 brackets at the bottom of this blog and click here for the Statis-Pro AL playoff updates. For final season standings and wrap up click here. The AL uses a 5-team playoff format, and the surprising White Sox join the Astros, Indians, Red Sox and Yankees.

To play your own games instructions and the dice and cards you need click here, and once you've reviewed how to play the game just click here to play.
and final standings are here.

In Statis-Pro, the NL plays the top 9 in the playoffs, and after the relegation league Phillies knocked off the Mets, the Phils also stunned the regular season champ Cubs in the opening game of their best-of-5. Here are the summaries of the opening game in each 5-game series, with more pressure on the NL squads since the first game losers must now win 3 of 4 to survive.

Cy Young Award winner Chase Anderson threw a one-hitter over 8 innings to claim the only series that went five games - as the Brewers eliminated the Cardinals 5-1 to advance to an ALDS series against the surprise Diamondbacks. They may have the clearest path to the ALCS, as the other ALDS features the loaded Dodgers and Cubs.

All of the offense was provided by Mike Moustakas, who hit a 2-run homer in the first and 3-run homer in the 5th to finish an incredible 13 of 23 five game series with five home runs and nine RBIs. Moustakas was in the running for AL MVP based on the three games below (see all Game Log MVP Points here) before being traded from the Royals to the Brewers, and didn't skip a beat in homering vs. the 1st place Cubs after the trade and continuing through the playoffs so far.

NL Statis-Pro Opening Round (Best of 5)
Statis-Pro NLDS series almost set.
The only NL Opening Round series to go the distance.  The Cardinals pounded the Brewers #4 starter Wade Miley.
Marcel Ozuna broke out of his slump with a 3-5, HR, 5 RBI's.  Miles Mikolas pitched six scoreless innings.
Milwaukee   2
St. Louis     9
(series tied 2-2)
This was the "former team" matchup as Jake Arrieta faced Cole Hamels.  Arrieta looked like he was writing the script.
He pitched six brilliant innings and hit the go ahead HR to put Philly up 2-1.  But with 2-on in the 7th pinch hitter Tommy La Stella hit
a fly ball, and the dreaded "outfielders collide" happened, both runners scored and the Cubs take the game and the series.
Chicago       3
Philadelphia 2
(Cubs win series 3-1)
The Dodgers advance to face the Cubs in the NLDS after routing the Rockies again. Newly acquired Brian Dozier got in on the hit parade, going
2-4, HR, 3 RBI's.  Ross Stripling moved into the #4 starter role and in his last two starts has thrown 15-scoreless innings.
Los Angeles    9
Colorado        0
(Dodgers win series 3-1)
Even on paper in a table-top game, the Nationals find a way to underachieve. Clearly better on paper, Washington fell behind again by four
runs. To their credit they battled back to tie the game (HR's from Taylor & Turner) 5-5 in the 7th.  But the unlikely hero in this series was
Ketel Marte (6-14, 3-2B's, 5 RBI's) ripped a walk-off series ending double in the bottom of the 9th to advance the Diamondbacks.
Washington  5
Arizona        6
(Diamondbacks win series 3-1)

NL Statis-Pro Opening Round (Best of 5)
Pivotal Game 3's:
Cubs start to assert themselves.  Jose Quintana shuts down the Philly line-up. (7 IP, 1 R)
Kris Bryant is starting to hit (2-4, RBI) and Chicago moves closer to eliminating Cinderella.
Chicago         5
Philadelphia   1
(Cubs lead series 2-1)
Dodger bats return after game two absence. Chris Taylor with a grand slam, Yasiel Puig with 3 RBI's. (he now has 6 RBI's in 2 games)
Will the Rockies have enough pitching to slow them down for two more games?
Los Angeles   12
Colorado         4
(Dodgers lead series 2-1)
Zach Greinke showed his playoff form (7 IP, 2 ER) and the Nats playoff problems continue.
Just like the real Nationals, the question remains why trade away two big bats at this time of year?
Washington   2
Arizona         4
(Diamondbacks lead series 2-1)
Another unsung playoff hero, this time it is Manny Pina. The Brewers catcher has gone 4-11, with 5 RBI's to lead the team.
In this game all the scoring took place in the first three innings.  Milwaukee gets four shutout innings from bullpen to close it.
Milwaukee    6
St. Louis       5
(Brewers lead series 2-1)
Now time for some elimination games!!

Another update at the playoffs continue.

Everyone bounces back to even Best-of-5 series! No team will be eliminated in Game 3, and the Phillies just traded for Luis Avilan - the PB2-8 stopper for the White Sox who were just eliminated and one might suspect decided to stick it to their crosstown rivals! With that ...

The Cubs’ season was on the brink, down 5-2 entering the bottom of the 9th  (already down a game in the series)

They scratched out 3 hits along with 3 walks to tie the game at 5-5. (left the bases loaded in 9th)  In the bottom of the 12th, Kyle Schwarber with the walk-off grand slam wins it 9-5.  Feels like a turning point for the defending NL champs, and adding

More extra-inning drama as the top two scoring teams in the Statis-Pro NL battled in a playoff pitcher’s duel.
Nolan Arenado finally broke through in the 12th inning with a solo shot to even the series.

The Nationals (before all the trades) got a desperately needed quality start from Stephen Strasburg. (7 IP, 0 R)
But it was still a scoreless battle until the 8th when three 2-out singles provided the difference and evened this series.

The Cardinals completed all the bounce-back games with Dexter Fowler and Matt Carpenter going deep for the offense,
and the bullpen barely held on for the win.  Not to worry, Mike Moustakas hit another home run, so that’s five in six games with the Brewers.

In 2017, the Chicago Cubs defeated the Los Angeles Dodgers in the NL Championship and then went on to win the 2017 Statis-Pro World Series against the Boston Red Sox. 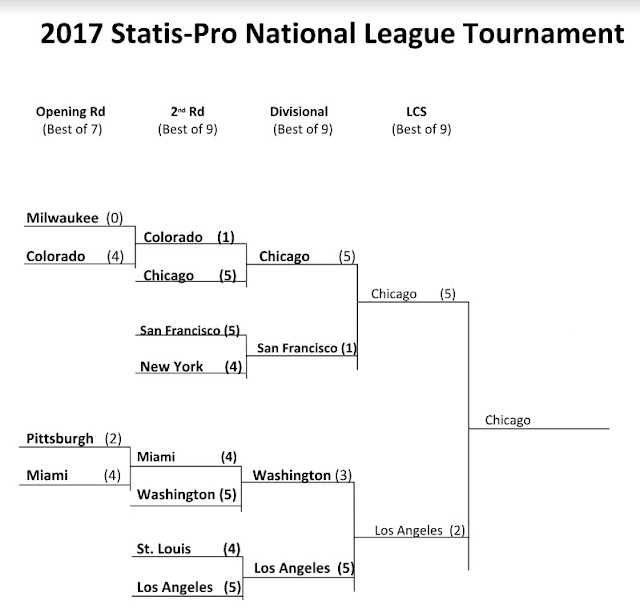 In 2016, the Chicago Cubs defeated the St. Louis Cardinals for the Statis-Pro NL championship, then lost to the Houston Astros in the Statis-Pro World Series. 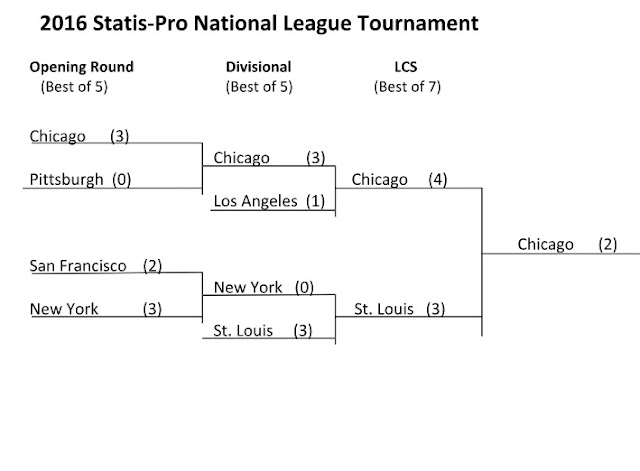