Statis-Pro ALCS: McCutchen to Yankees in Battle of the Super Bullpens with Indians

Just as we set the Statis-Pro ALCS Series, we had to add the card below for Andrew McCutchen to the New York Yankees. Here is the excellent card right-handed card added to what is already a fantastic line-up - particularly against the Cleveland Indians incredible left-handed relief pitching. 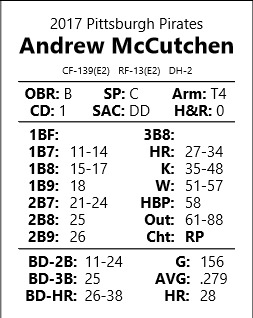 The average Home Run range is 27-32, meaning that McCutchen hits homers on all those numbers but also hits homers on a 33 or 34 - numbers that are strikeouts for the average player. In addition, he gets to base on a walk or hit by pitch on eight additional numbers (51-58) meaning he reaches on 26 of 64 random numbers on the base-8 system from 11-88. The one thing McCutchen no longer brings is elite defense like Gardner in leftfield and Judge in right field around him - who both have the ultimate CD (Clutch Defense) 4 defense for having been nominated for a gold glove in at least one of the last three seasons (see all recent gold glove nominees).

The final account of the first two playoff series and Red Sox win in the wild-card game are here.

In this series, this helps give the Yankees incredible line-up a bit of an edge over an also outstanding Indians line-up. However, batters will need to get big hits against the starting pitchers because the relief corps for both teams are unbelievable and can put outstanding pitchers on the mound for almost an entire game if the starter is knocked out.

To that end, the Yankees have a very steady rotation with all four pitchers as PB2-7 (good) starters. That means the Indians will have the edge in Games 3 and if necessary Game 7, with PB2-9 (the best) and Cy Young winner Kluber starting those games. However, the Yankees will have the edge in Games 2 and 6 when they can hit off Bauer - who is excellent this year in real play but is only a PB2-6 for mediocre pitching last year.


The following is a more in-depth explanation of the dynamics of the Statis-Pro system which groups pitchers from PB2-9 (the very few who keep the action away from the batters' cards 83% of the time) and the terrible PB2-5 (which do so only 28% of the time).

In the end, the two AL teams with six dominant Statis-Pro reliever cards emerged from the season and playoffs - and will now face off in a seven-game series. The key difference between Statis-Pro and all other baseball board games was the ability of the pitcher to first determine which card was in control during a plate appearance, and then the results are determined. The average starting pitcher was a PB2-6, meaning the pitcher would be in control 42% of the time and the batter 58% (combined total of two dice or fast action cards of 2, 3, 4, 5 or 6 for the pitcher) and the average reliever is a PB2-7 - with the one extra die roll of 7 giving a PB2-7 control 58% of the time.

The Indians and Yankees bullpens were the two loaded with PB 2-9s and PB2-8s. 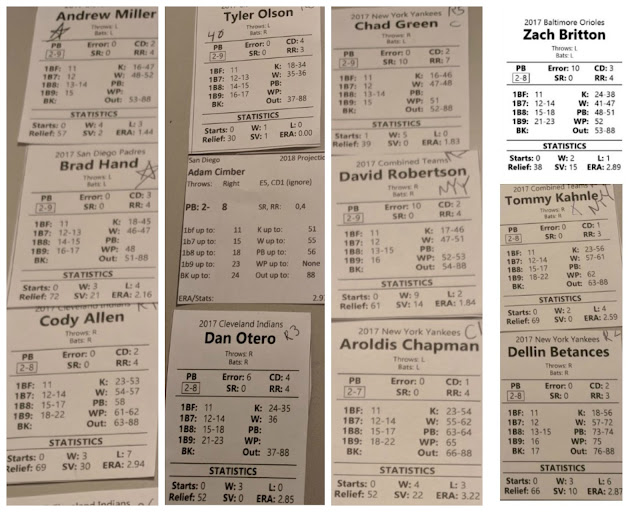 In Statis-Pro the top pitchers have a PB of 2-9, which means they keep the action on their card in 30 of 36 combinations. So if they face six great batters in a row, on average only one will have a chance to for an extra-base hit.  In the case of the Indians Andrew Miller or the Yankees Chad Green, that means five in six times there are only 5 numbers that are hits out of 64, and a couple of other numbers are walks.

Our basic rules are the best reliever for each team (Miller and Green based on these cards) can only be used once at least two batters have batted in the 8th (the last inning and a half basically).

Most teams hope to have a single PB2-9 reliever, however, the Indians have three and the Yankees have two.

The second best reliever can come into the game from the beginning of the 7th inning on, meaning both teams can go to a PB2-9 pitcher when the 7th inning starts.

The Indians third PB 2-9 means they can go to one after two batters have hit in the 5th, both teams can go to their 4th best pitcher (a PB2-8 for either team while most teams would need a PB2-6 that early.

While that is the earliest permissible, pitchers who pitch to at least five batters must skip the next game, and any that pitch to 12 need to skip two games. Also, many pitchers must leave the game they are in after allowing a few hits or walks, so you do not want to go to pitchers as early as outlined above because a combination of pitchers resting and pitchers leaving before the next better one is ready can create a domino where worse relievers must be used.

That being said, these two teams have incredible options while a typical team might have one PB2-8, then a couple of PB2-7 pitchers, and then start to need to use PB2-6 or even PB2-5 pitchers.

Because there are a lot more PB: 2-6 pitchers than any others in the league, a batter will get the action on his card about half of the season, but in a playoff series, the pitcher will control a lot more of the action.

Corey Kluber is even more valuable than the best of this pen because he is the best starting pitcher in the league with a PB2-9 as a starter who can pitch a complete game rather than just an inning or two. The average starter is a PB2-6, while the average reliever is a PB2-7.
Posted by JohnPudner at 10:46 PM