After real life heart-breaking losses for my team Marquette against Creighton as well as one of my back-up teams Auburn, I decided to divert attention back to the classic tournament with the Value Add Basketball Game.

When Juwan Howard's altercation took over the sports news, my first thought was to remember if I had his Fab 5 in my game, but then realized I had gone with Glen Rice's Michigan from a few years earlier. Back to the 32-team tournament in progress.

Note that among the slight adjustments we made to some cards, Kansas 1997 team had a dunk range of 51-57. Kansas and Kentucky squared off to see who would face the winner of Artis Gilmore's Jacksonsville and Clyde Drexler's Houston.

Alex Groza was a three time All-American, and led Kentucky to their first national title and the US Olympic team to the Gold Medal before being voted NBA Rookie of the Year. His brother Lou Groza is in the football Hall of Fame as the first great field goal kicker.

However, at 6-foot-7 with none of his Fab Five teammates taller than 6-foot-3, the could not keep Paul Pierce and Kansas 1997 twin towers of 6-foot-11 Raef LaFrentz and Scot Pollard off the Boards. with one more point, the whole front line would have ended up with double doubles with Pierce (22 points, 10 rebounds), LaFrantz (9,14) and Pollard (15,13).

Pierce gave Kansas their first lead with 4:22 to go in the 1st half when he grabbed three consecutive offensive rebounds, and finally converted the third one for a 24-23 lead. A few minutes later Pierce made the first free throw and missed the second, but LaFrantz grabbed the offensive rebound and was fouled - hitting both free throws to make it 29-27.

With 13:11 to go in the game, Pollard put it away when he grabbed an offensive rebound, and fed it to Pierce who dunked for a 53-39 lead and they never looked back.

Here is the tournament to date. 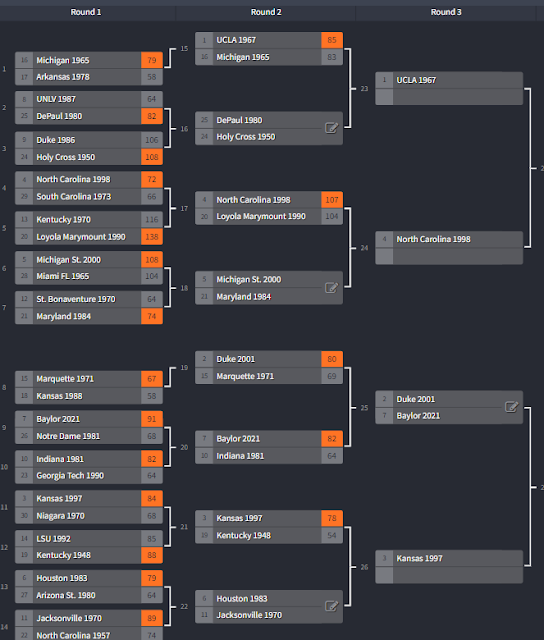 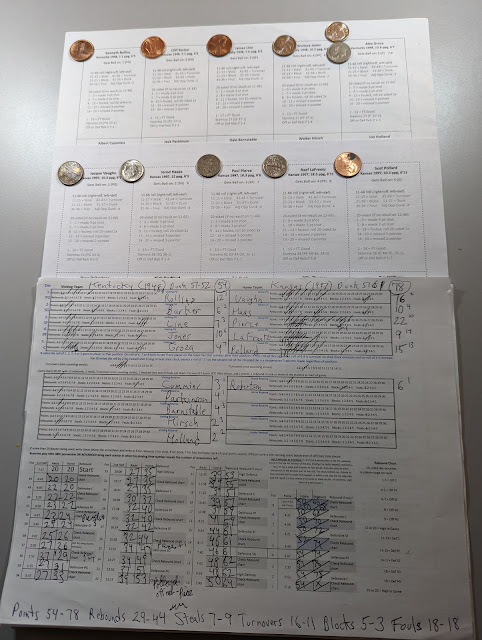 Posted by JohnPudner at 7:46 PM