After 112 million watched a thrilling Super Bowl, the other long-time $1 billion sporting event of the year - March Madness - is right around the corner.

When choosing an All-American College Basketball Team, you can go with the BEST player at each position - who is usually a freshman heading for the NBA. Or you can go for the player who is truly most valuable at the position - which is almost always NOT a freshman, but a player who has learned not to make mistakes that offset some of the good he does for his team. We break down the best options in this blog, and our separate blog on each of the five positions.

For the Freshman All-American Team you can click on this CBS Sports 247 Link. 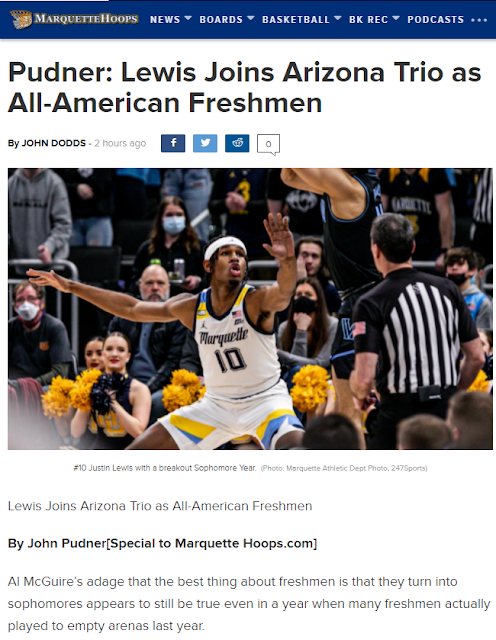 The one thing we do believe you should consider, and which seems all but ignored in most voting and most analytical systems except for www.valueaddbasketball.com, is the defense of each candidate. This CBS Sports site goes into great detail on how this is calculated, pointing out that taking away points helps a team win just as much as scoring points. If you are considering All-Conference players, you can click on www.valueaddbasketball.com and sort by conference.

For the full blog on point guards, click here.
If anyone had any doubts about Collin Gillespie being the top point guard in the country, they should watch how he has brought Villanova surging back into the top 10 - and the difference it made last year when he was injured for March Madness. It is a very close battle for 2nd Team All-American Point Guard between Mississippi State's Iverson Molinar and SMU's Kendric Davis.
It may look strange to have Wyoming's super star Hunter Maldonado listed at point guard despite standing 6-foot-7, but he is in the top half percent of all players in assist rate - dishing and making everyone else score for a team that appears to be heading to March Madness.

For the full blog on shooting guards, click here.

One reason we love running these numbers is to find truly elite players who will not be noticed because their team either does not get enough TV coverage or is just not winning enough games to draw attention. The biggest case this year comes from teh 13-10 Washington in the Pac-12. We calculte that Washington would be 4-19 instead of 13-10 if Terrell Brown were not on the team, and for us that makes him the truly deserving 1st team All-American shooting guard who will not get any voters for it.
The race for 2nd and 3rd team All-American shooting buard is much closer.  TyTy Washington should be considered because it is truly unusual for a freshman guard to be anywhere near this high - but K-State, St. John's, BYU, Tennessee and the player who may have improved his team the most this year from last year - Alondes Williams of Wake Forest.

For the full blog on small forwards, click here.

If you were picking an All-American team based by position, the Small Forward or "3" spot would be the toughest choice. Mathurin certainly is close enough to the top players to be considered due to freshmen surging at the end of the year. However, Wisconsin's Johnny Davis, San Diego State's Matt Bradley, Chattanooga's Malachi Smith, Loyola's Lucas Williamson and Iowa State's Izaiah Brockingham could all be serious considered as the most valuable small forward in college basketball.

For the full blog on power forwards, click here.

A voter would certainly be justified in placing Smith, likely the No. 1 pick in the NBA draft, as the 1st Team All-American Power Forward. However, if the entire season including early games were rated evenly, the 1st and 2nd Team All-American should really go to two Big Ten stars. Ohio State's EJ Liddell may have been the most valuable player over the course of the last two seasons, while Keegan Murray of Iowa has been able to explode now that his teammate and National Player of the Year Luka Garza has graduated.

In true value, our calculations indicate the 1st Team All-American so far should come from Kentucky, and Holgrem is in a tight races for the 2nd Team All-American center with stars from Indiana, Auburn and UNC.