Last week we posted the prospects for the 1st, 2nd and 3rd team All-American squads as picked by position and based on their true offensive and defensive value to their team above a replacement player, as calculated at www.valueaddbasketball.com. This follow-up post is response to two requests; 1) to list the All-Americans by 1st, 2nd and 3rd team, and 2) to move Chattanooga's All-American Malachi Smith to his true position of point guard even though the fact that he grabs many defensive rebounds makes him "look" like a small forward to the analytics at www.kenpom.com and www.valueaddbasketball.com.

The following are the lists in that order, starting with the most valuable PG, SG, SF, PF and C as the 1st Team All-Americans. As noted many times, freshmen are almost always the "best" players in the country because the best leave for the NBA after one year. However, they actually are rarely the "most valuable" because they still make too many mistakes. Thus you will see none of the superstar freshmen in the 15 players to make our All-American teams, but we listed the corresponding three All-American Freshman teams below.

And finally the 3rd team:
As for the freshmen, the following are the 1st three All-Freshmen teams first posted in this story. We do not insist on position balance with the freshman, but did required that at least one guard make each of the three teams. 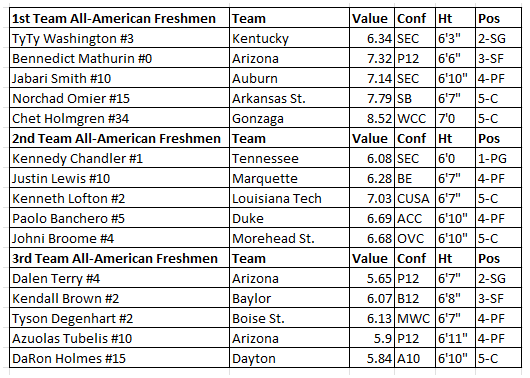 Posted by JohnPudner at 3:23 PM