Baylor shooting guard Jared Butler calculates as the top defensive player in the country, as first revealed in this CBS Sports/247 piece, three weeks before teams are selected for March Madness. You can sort all 4,183 college players by team or conference at www.valueaddbasketball.com.

Butler steals the ball on 4.7 percent of opponents' possessions, the fourth best total of any major conference player. His ability to disrupt opposing teams is a key part of Baylor having the 6th best defense and 2nd best team in the country. The only team in the country that calculates as better is Gonzaga, which www.kenpom.com calculates is currently the best team of the Century. This is no guarantee they will win March Madness however, as the second best team of the century at www.kenpom.com is the 2015 Kentucky team, which was 38-0 until upset by Wisconsin in the Final Four. 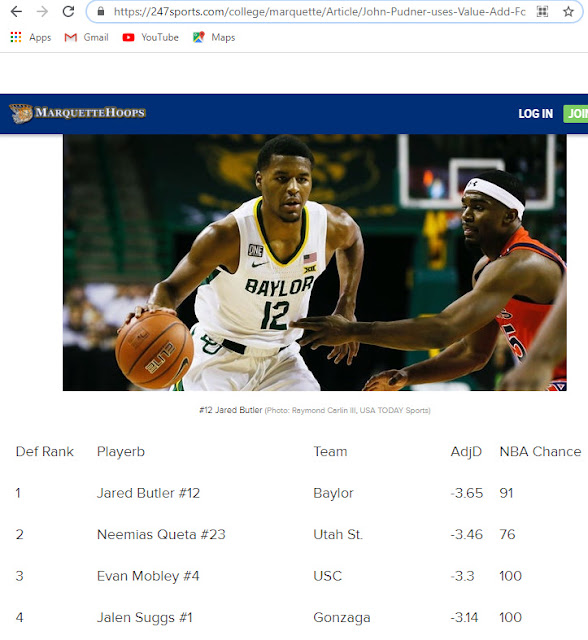 Defensive ratings are not as precise as the Offensive Ratings at www.valueaddbasketball.com. The precise measurement of a few defensive stats can be measured precisely since teams average about 1.0 points per trip down the court, so a defensive player with a steal gets credit for taking away an average of 1.0 points, a player with a blocked shot 0.83, and a defensive rebound 0.33 points. However, each player on the team gets credit every time the opponent fails to score and it is not the result of one of those three things, and shares the blame anytime the opposing team scores. This is also adjusted by the level of opposing offense each team plays.
The following is a breakdown of factors that went into the ranking of the top 25 defensive players at www.valueaddbasketball.com, with Butler erasing an estimated 3.65 points a game from opponents more than a typical replacement player, etc.
Posted by JohnPudner at 10:25 PM