The 2021 Statis-Pro Baseball season started with 70 percent of the country covered with snow in mid-February. The game is played with these player cards based on projected 2021 stats, and games below are listed in reverse chronological order.

The six 2-game series below featured 12 teams ace and no. 2 starters, and those 12 teams will next play a new opponent with their 3rd and 4th starters.

Due to the odd number of teams in the league, the three remaining teams play a round Robin "between" the other teams first and second round. So none of the teams have a pitching disadvantage, Philadelphia and Arizona will face each other with their ace and No. 4 starter. Then both teams will pitch their No. 2 and No. 3 starters against Pittsburgh. In one of those series the Pirates will also throw their No. 2 and 3 starters, and in the other series they will pitch their ace and No. 4 starter.

It took a great start from the last man in the Padres strong rotation (Musgrove 6 ip, 1 r) and grandslam by no. 8 hitter Cronenworth to sweep game 2 and win the series.

The two leadoff hitters were the series leaders - Tatis 3 of 8 with 2 Homer's and double for Padres and the Giants Dickerson went 5-9 with a homer and double. 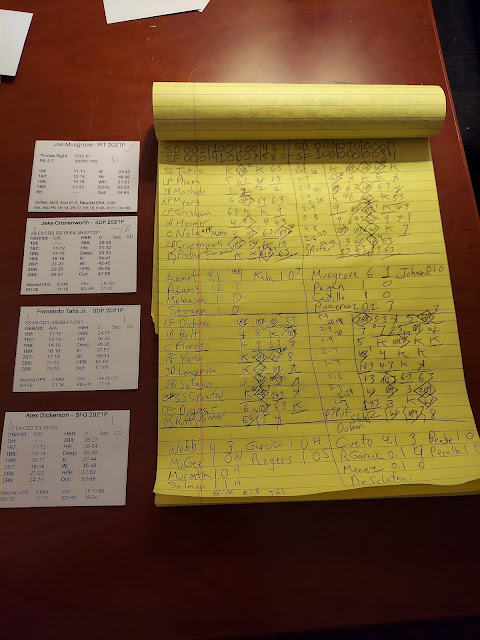 The disastrous start for the Braves continued as Freeman and d'Arnaud were injured early and the middle relief gave up 10 runs in three innings in a 12-5 loss to the Marlins. Cooper hit three HRs in the series and Rogers gave the Marlins 3 scoreless innings in middle relief (we only allow most relievers on inning per two game series, but they can pitch 2 innings if they averaged at least 2 per appearance, and starting pitchers that do not make the 4-man rotation like Rogers can pitch four.

Despite their 2 stars on the bench for the second game, Ozuna hit his 2nd homer of the series and Acuna doubled in the winning run in a 4 for 8 series with 3 doubles and a homer.

Sign of Statis-pro gods in the cards, Brault tagged for two triples and two Homer's in first five batters he faced in the nightcap, then was thrown out of the game for arguing balls and strikes (z play 12). 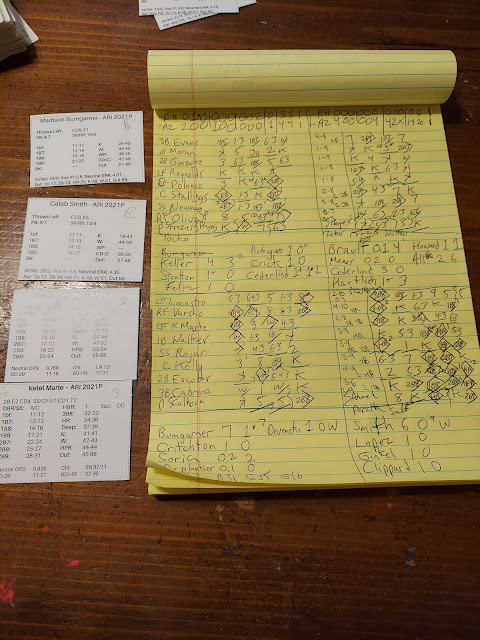 Nola not only threw 7 strong innings in a 10-1 win but singled and homered in one of the most productive series for the No.9 spot in the NL. Miller hit pinch hit Homer's in both games, then Knapp hit a pinch hit homer and Moniak a pinch hit double to leave the No. 9 spot 6 of 9 with 19 total bases to slug over 2.000. The next best spot was Segura who went 5 of 9 in the no. 7 spot to give the bottom three spots 13 of 22 Phillies hits.

While the Phillies get credit for a 3-0 sweep in the first game for the 5+ run win, the Pirates rallied in the 8th of game 2. After a 3-run homer gave the Phillies a 5-4 lead in the 7th, Stratton came in to stop the damage with 1.2 innings. Stallings double in the either to tie the game and advanced to third on an error on McCutchen in left, and scored on a grounder in the hole for the 6-5 win. 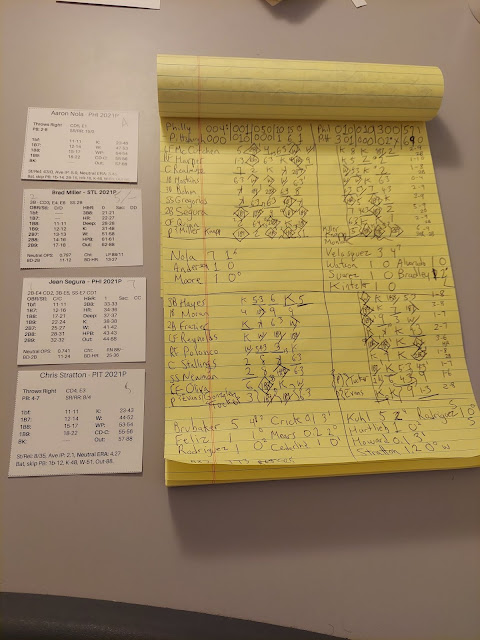 This looked more like a 2019 Brewers-Marlins game then the 2020 surprise Marlins in the short season. The first four in the Brewers lineup had 3 hits each followed by 5 hits for Urias.  The Brewers outfit the Marlins 25-8 in the two games. 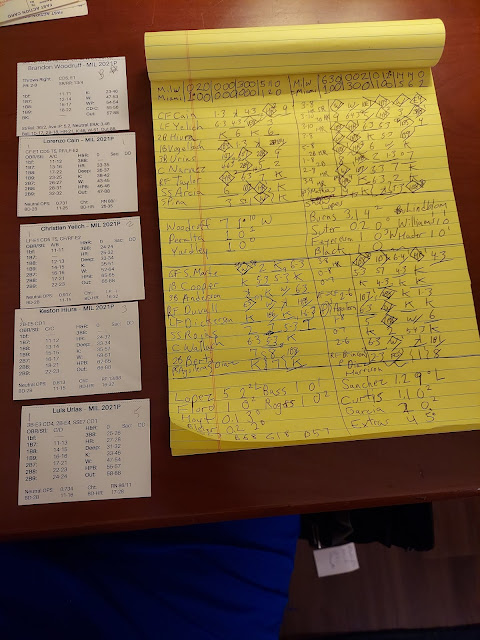 Arenado had a single triple and homer in the nightcap against his old team. 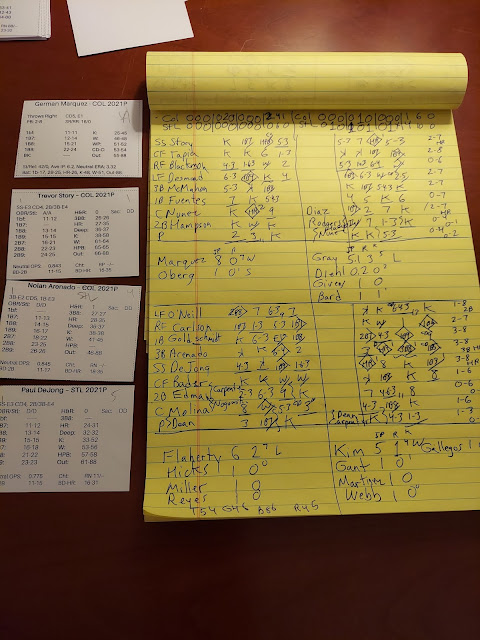 Former Dodgers Pederson ruined the debuts of the Padres two new aces, hitting a 2-run homer off both Darvish and Snell in each win. The Cubs pulled.the upsets despite Machado going 4 of 8 with a double and homer. 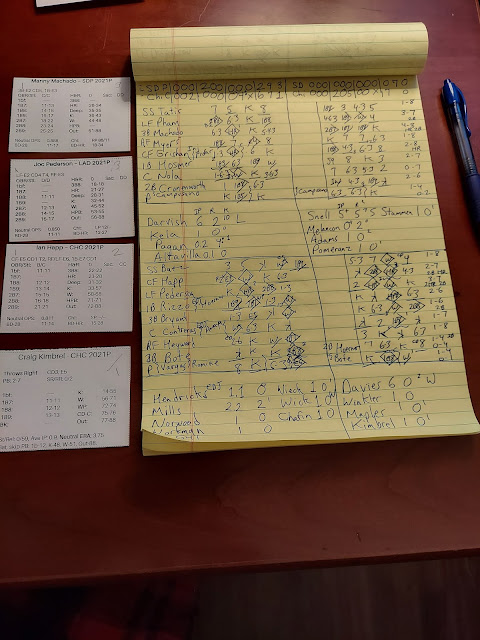 The day that the Dodgers overwhelming line-up and World Series with the addition of Bauer and Price was picked by Vegas to win 103.5 games, 10 more than anyone else in the NL, they kicked off Statis-Pro  play..

Yaz went 3-7 and Gausman gave a nice 6 inning one run performance to keep the Giants close and avoid a 5-run sweep in either game. However, Bellinger and Smith combined to go 5 of 14 with 2 doubles and a homer and Bauer threw seven innings of shutout ball in his Dodgers debut to five the Dodgers 2 wins. 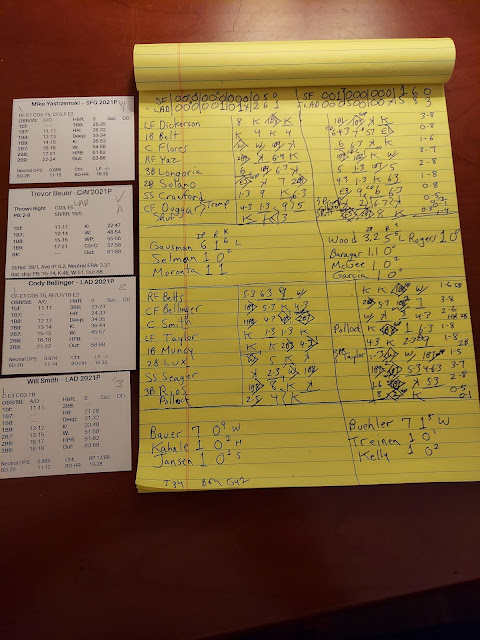 Scherzer and Strasburg combined for 21 strikeouts during 15 innings of scoreless ball against a strong Braves line-up. The Braves were happy to resign Ozuna, who like d'Arnaud had a double and a single, but the rest of the Braves totalled only 2 hits.

Scherzer not only threw 8 shutout innings, but drove in the only run of the game with a 7th inning single in the 1-0 win. Gomes clutch 3-run double capped a 7-run 6th inning, while Turner went 4 of 7 with a walk in the 2 games. The Nats get credit for a sweep in the second game for leading by 5 runs after 8 innings, and therefore are officially 5-1.

Soto hit a deep drive that would have been out if we played this as a Nats home game, but we are playing all these games in a neutral park (11-48 HR) and the drive was a 55, so caught at the wqll. 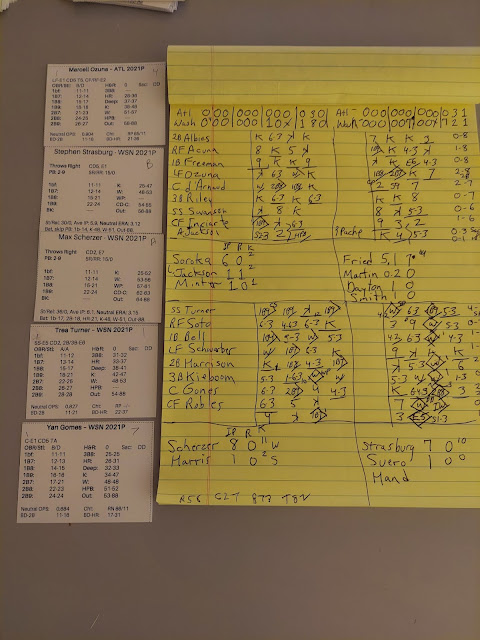 The Mets hitting stars were McNeil and Alonso,   both with 4 hits including a homer, while the rest of the players on both team combined for a .149 average (16 of 107) in the two games of great pitchers. DeGrom and Diaz combined for a 3-hit shutout with 13 strikeouts in the first of the 2 games. 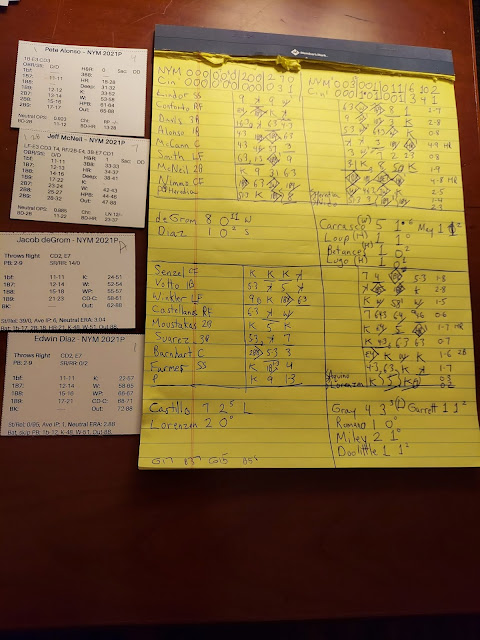 Winning team in each game is credited with 2 wins and losing team with 1 win, unless the winning team led by at least 5 runs at the end of the 8th without using their closer.

DBacks 5-1, next vs Phillies

Dodgers 4-2, next vs rockies

Phillies 4-2, next vs dbacks

Colorado 3-3, next vs dodgers

Reds 2-4, next vs Cardinals