2021 Statis-Pro Season Set-up and Under Way - UPDATE, RED SOX IN, MARINERS OUT

Our Statis-Pro season utilizes these projected batter cards and these pitcher cards. Both the MLB/AL Commissioner based in Montana and NL Commissioner based in Alabama printed out these cards, which you can use for your own Statis-Pro games, and we keep up with roster updates to move cards between teams. If a player without a card makes a team's depth chart, the Commissioners find a card for a player with similar stats or use the replacement cards based on a batter's OPS or pitcher's ERA show further down in this blog.

The AL field is set for the 2021 Statis-Pro American League season. As always, the Commissioner starts by relegating five teams and aligning the divisions. The NL uses a slightly different procedure of allowing all 15 NL teams to start the season, but then relegating the five worse teams early in the season and at that point divide the remaining 10 into an East and West.

Each division winner receives a first round bye, the remaining four wildcard teams meet in the opening round best-of-5 series.

Best record gets worst remaining seed after wildcard round.

The Divisional Round, League Championship Series and World Series will be best-of-7.

The following are the AL Divisions and five teams relegated.

Regular season play will begin in March in the AL.

The NL started their season in mid-February. While the NL is playing all 15 teams early, a NL team will occasionally play one of the relegated AL teams. 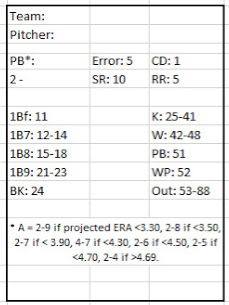 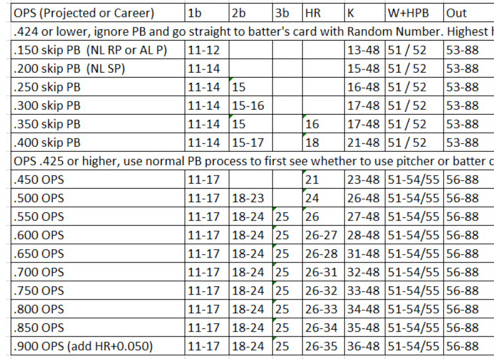 When standings are released, any ties between teams with the same winning percentage will be broken by the toughest opponents faced to date based on the projected wins for all opponents based on these preseason Vegas win projections.

Posted by JohnPudner at 5:05 PM