While its just a small distraction as we worry about young adults trying to pay rent while their place of employment is closed for the coming weeks, or the health risk to the elderly in particular, we worked to create a piece of March Madness that would have started today.

The four Regional Brackets are being updated with results here, with more detailed results as we play the West, East, South, Midwest and NIT Brackets and a score sheet and rebounding chart for your own games is at the bottom of this blog.)

If you are one of the 27,403 who clicked in the past on these game instructions to play the FREE Value Add Basketball Game, or just looking for a new free solitaire game to play while unexpectedly at home, you can click here for player cards from the 100 teams to print and play or just to print out player cards from your school or to forward to any fan you know.

You can scroll to the bottom for an explanation of the cards using the great Devon Dotson and the top-ranked Kansas Jayhawks and to look up which page to go to of the free download of the  free download to print out your favorite team. For example the Kansas cards are the images titled page 94-96, while NC State is 142-144 and Richmond is 199-201. These are drop box image files so they open quickly and you do not need to go to drop box - you just need to click on the 3 pages you want and print the out to have an entire team.

Instead of starting with Kansas, I will start with my tournament that kicked off today with a play-in game (normally in Dayton Ohio) between my East Region "last four in" 11-seeds NC State and Richmond. 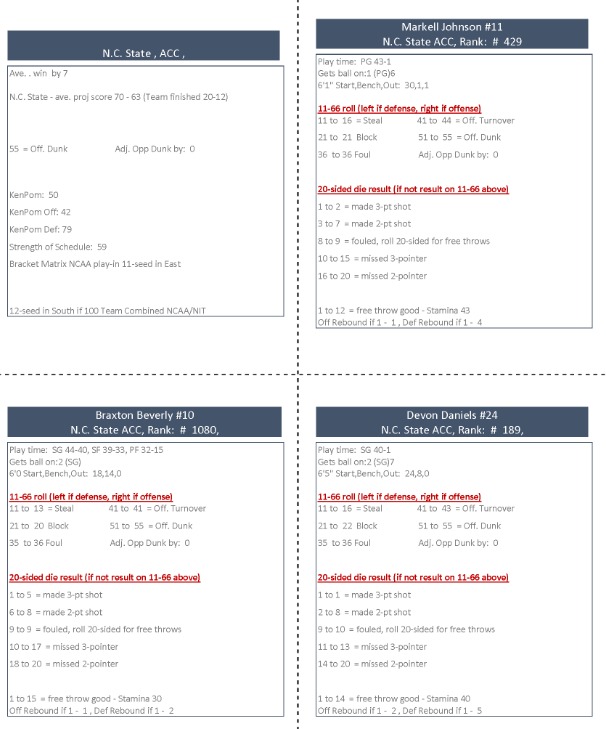 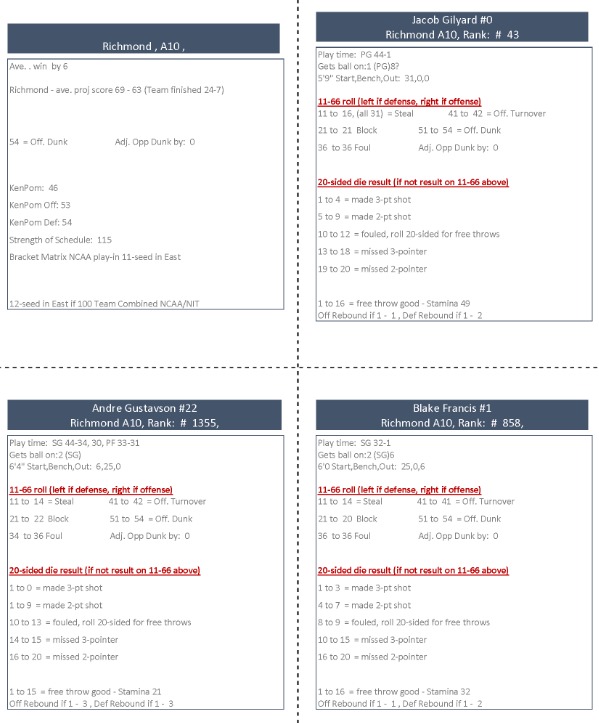 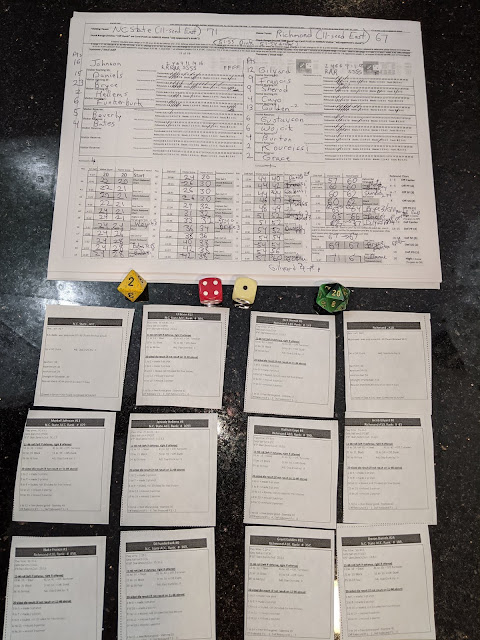 This game had the twists and turns of many March Madness games, as both teams struggled in the first half. The Richmond Spiders great Jacob Gillyard lead a great defensive effort that gave the Spiders a 28-24 half time lead. However, NC State's great shot blocker Manny Bates, one of the few players who blocks a shot taken by any player on rolls of 32, blocked shots on the last two Richmond trips of the half to keep it close.

However, Richmond regained the lead on a 4-point play by Gillyard with 6:05 (10 possessions) to play to make it 60-57 Richmond. NC State never lead again until the final two possessions (1:15 to play) when Bryce scored to make it 69-67 Wolfpack, and then on the defensive NC State center DJ Funderbunk ripped down a very difficult rebound away from Richmond players, and passed to Markel Johnson who clinched the 71-67 win with a basket.

While Richmond appears on the "home" side of the scorecard, I play all NCAA games as neutral games with no home court advantage. However, when I play off the first three rounds of the NIT I will play that the better seed is the home team. In those games there is a home advantage where referees miss about 2-3 more calls per game in favor of the home team, which is why home teams play an average of 3 points per game better than on a neutral court. In the game the dice rolls of 11-66 have the following change to calibrate for that change:

36 roll - when visiting team has the ball, the referee misses a foul that was committed by the home defender and the visiting player loses the ball out of bounds for a turnover to give the home team the ball.


What Each Line on the Card Means

See the bullet points below this image for what each line on the player and team cards mean. 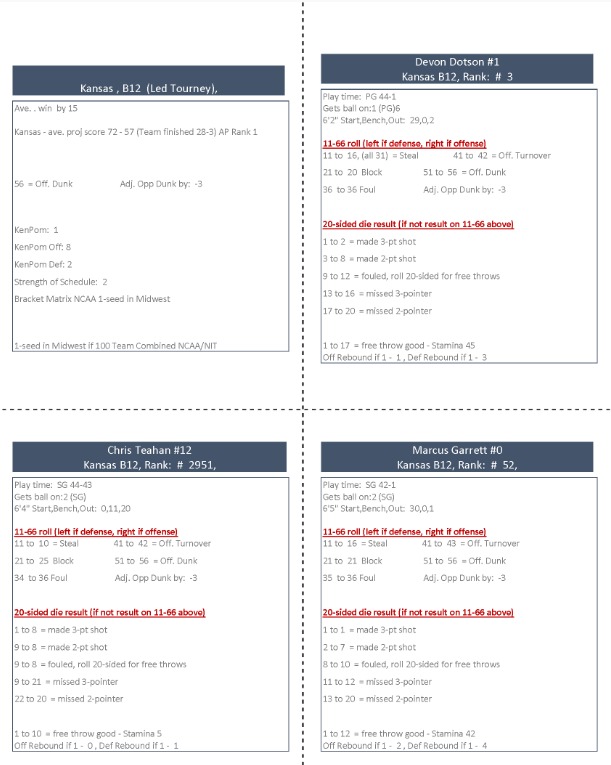 To Print Out Your Teams

To print out the 11 player cards for the following 100 teams projected to go to the NCAA or NIT tournament in 2020, start by looking below to see the pages on which they appear. Then click on this link of public image files, and use the arrows to get to the team's three pages. Open one at a time and click the print icon. Each page includes four players, so cut cards apart. You can click on the score short below the list of teams and print it out as well to play the game. 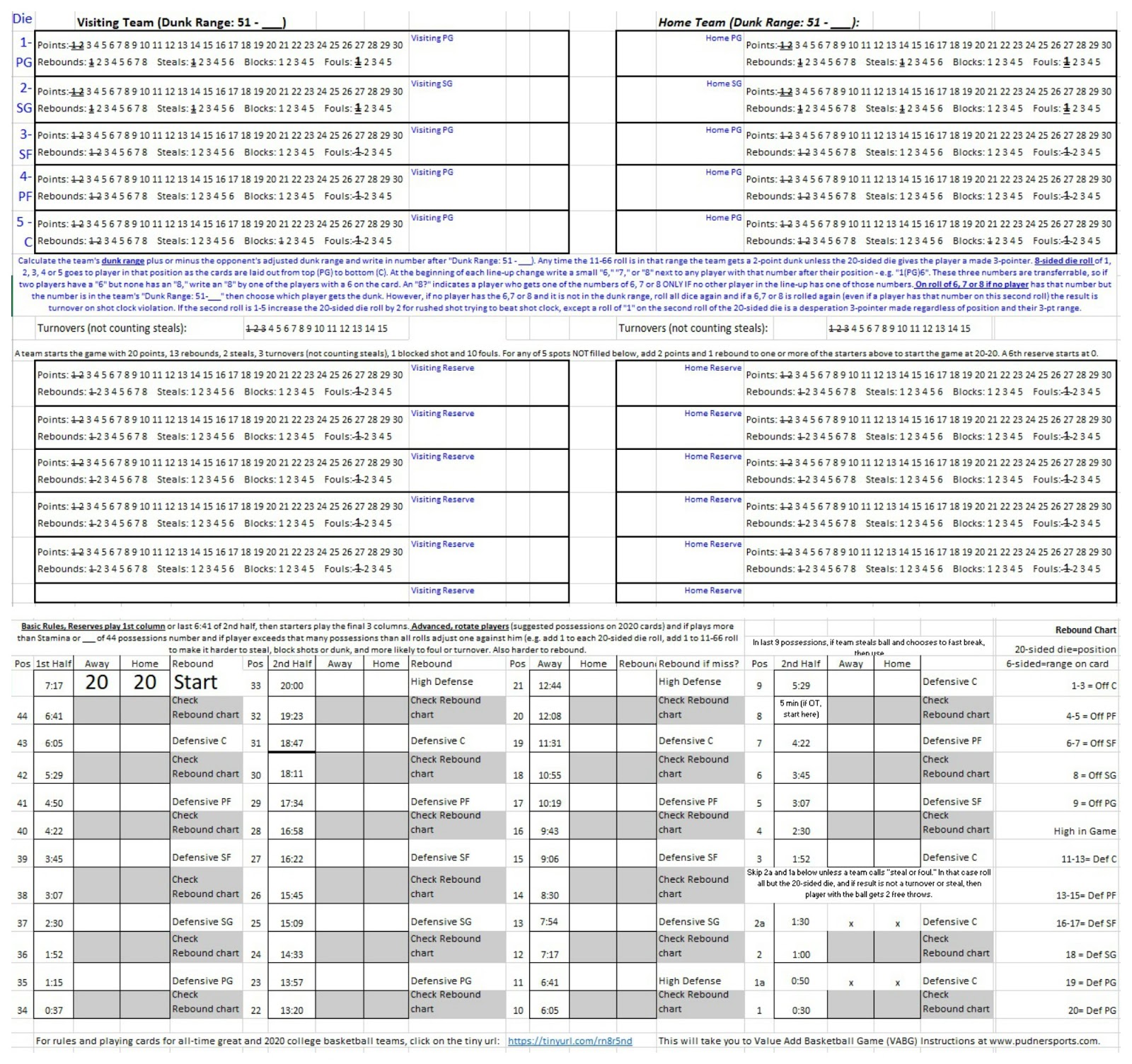 Please do not get the impression that I am equating the heart break of basketball players not getting play and the millions of us fans who miss filling out brackets and watching games with the elderly or sick worried about dying from Coronavirus or the young workers at restaurants and other places closed by the virus who do not know how they will pay rent.

However, for anyone seeking some return to normalcy, even in a leisure activity while stuck in their home - this game is free (so I am not trying to profit from crisis, just produce something others might enjoy). Since my big trip every year is traveling to the Big East tournament and this week March Madness, I decided to dedicate the time I would have spent watching games and traveling to instead build player cards and work with a great graphics person to update the cards and perhaps give some basketball fans out there a fun distraction or have a player disappointed that his one shining moment.