The Value Add Basketball Rankings of the top 1000 players appear below, the Value Add Basketball ranking which calculates how many points he would improve the average team per game. This is further broken into his offensive rating for how many more points an average team would score if he joined, and the defensive ranking to indicate how many fewer points opponents would score. Click for a google sheet of all 4000+ players or click here for the CBS 247 story on these rankings: 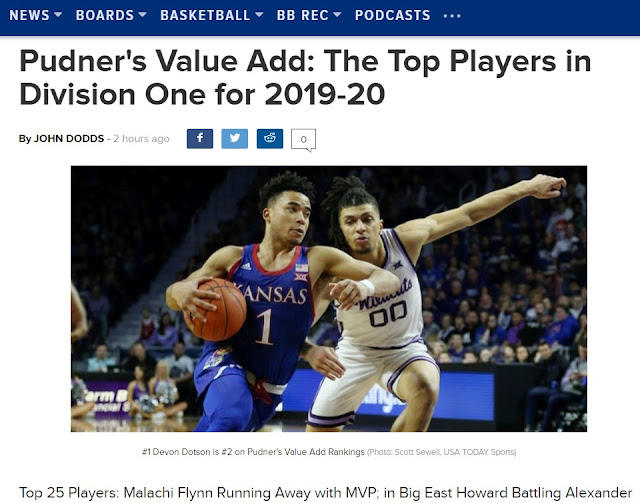 The all-time players are still at www.valueaddbasketball.com and we hope to fix the current year at that website soon.

My Auburn friends have asked why their players do not rank as high this year even though the team has been very good. First of all, Samir Doughty's ranking as the 99th most valuable player makes him truly elite since there are more than 5000 players. Also, Isaac Okoro ranks as the 29th most valuable freshman. While Auburn's stats are very good, Value Add considers how tough the defense is that each team faces and Auburn has faced the worst defense of any Power 6 conference team, 75th of 75 based on www.kenpom.com. Auburn's defense is also below average, only the 44th best of 75 Power 6 conferences, which makes their players' overall defensive ratings worse as well.

None of this is to say Auburn cannot make a run like they did last year, when I was bullish on a potential Final 4 run, but it does mean they are untested this year and may not be as prepared for a tough challenge in March Madness.

Posted by JohnPudner at 4:10 PM