This Value Add Basketball Game plays out the NCAA 2020 Tournament using these player cards. Game summaries will be included below the bracket, with the most recent result always moved to the top story until we have a East Region Champion from among these teams. 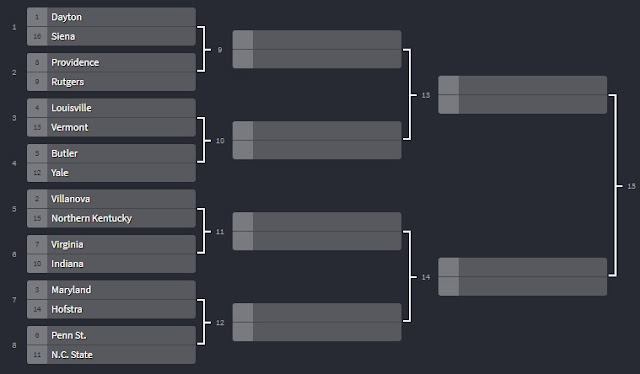 Two of the best outside shooters in the game - Eric Monroe (18 pts, 4 3-pointers) and Azar Swaim (23,1), combined with the almost unstoppable inside game of Paul Atkinson (23 points).

Yale did an incredible job of both drawing 26 fouls, and avoiding committing them (13), and McMahon, Nwora and center Steven Enoch (10,8) all played a long stretch of the game with four fouls. Losing any of them would have been very tough, but they all avoided the 5th foul until Enoch fouled out with 53 seconds left and Louisville leading 83-74. 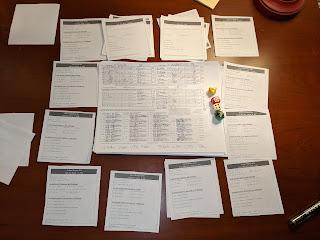 The 1.36 points per 69 possessions (teams get 66 possessions per game plus Amy added during the last 9 possessions for fouls or fastbreak steals) shattered the high of 83 by BYU through 36 tournament games to date. The Colorado 88-86 win over Marquette provided the second and third highest scores, but that was the on 1st round game to go into overtime. 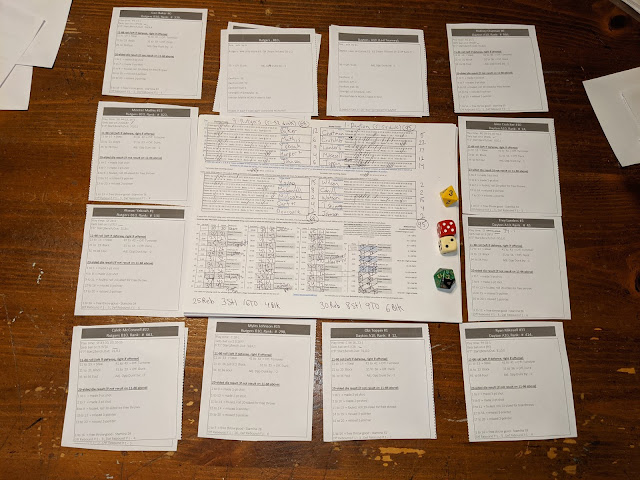 After losing a 9-point lead to fall behind 48-47, NC State rallied behind Devon Daniels to defeat Penn State.

Daniels (17 points, 5 steals) hit his only 3-pointer of the game to make it 50-48, then stole it four of the next five possessions to make it 57-50. Durong that span  he twice scored on fast breaks and on another one passed to Braxton Beverly who hit a 3-pointer. Penn State was never closer than the 4-point final margin again despite Lamar Stevens 14 points and 10 rebounds.

The Big Ten fell to a still impressive 5-2 with three 1st round games remaining. The East Region wrapped up with a clear path for Dayton or Louisville - the only two of eight better seeds to win though based on the cards Indiana was favored over Virginia despite being the 10th seed.

The 2-6 mark in the East contrasts with the 14-2 mark of better seeds in the other regions. 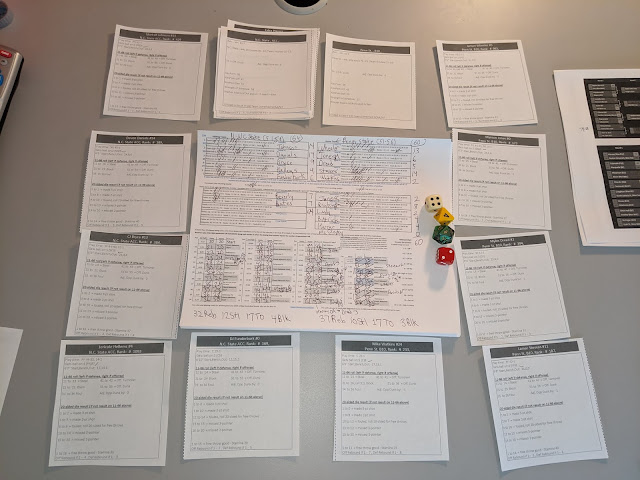 All-CAA www.valueaddbasketball.com point guard Desure Buie turned in the performance of the tournament so far by drawing 8 fouls including drawing two fouls shooting 3-pointers that  led to All-Big Ten point guard Anthony Cowan fouling out. Maryland's offense ground to a halt with not true point guard to replace him, which limited the chances to get the ball to 2nd team All-American Jalen Smith (13 points, 10 rebounds, 4 blocked shots).

(In the game if no true point guard usnon the court the team can only get shots up on a 1-5 roll on the 8-sided die, meaning Jalen Smith was only getting the ball on "5" and not "8" and if a second 6-8 was rolled Maryland committed a shot clock violation.)

Buie finished with 30 points on four 3-pointers and he and his fellow All-CAA teammate Eli Pemberton (12 points, 6 rebounds) both had three steals as Hofstra won the turnover battle 19-12.

Really, 30 points by 5-11 CAA player against elite competition? I had not seen Hofstra play this year so looked them up after the game. They won their only quad 1 game at UCLA by double figures. Buie had 29 points and 7 assists. He did this taking 12 shots!!!! The way you know if a player is shooting too much is he should average 1.25 points per shot taken (by making shots or drawing fouls and making free throws). He should have had 15 points if he took 12 shots - he just missed doubling that with 5-8 2-pointers, 2-4 3-pointers and 13-13 free throws at Pauley Pavilion - that's insane.

The upset ended a streak for the dominant Big Ten which is now 5-1 in the tournament with 4 teams still to play 1st round games.

Ironically the worse seed is 5-2 in the East Region and only 2-14 in the other three regions, though many of the tighter seeds still need to play. Despite the win for the CAA, the Big Ten is still as dominant in this tournament as they were in the real 2020 regular season with the following number of teams in the second round, or still waiting to play their 1st round game:

SEC (2 to 3): Kentucky, LSU in second round, Auburn still alive.

Big East (2): Seton Hall and Creighton in 2nd round.

WCC (2): Gonzaga and BYU in second round.

6 to 12 from one team conferences, led by San Diego State and Dayton. 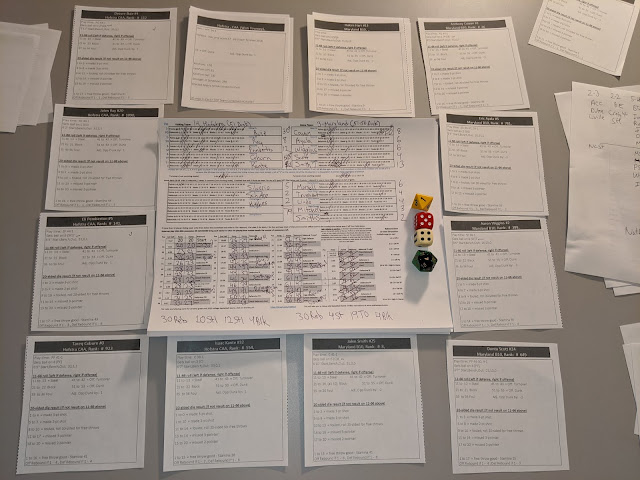 Only Baylor, Iowa and cross state Kentucky looked as dominant in the tourney so far as they shot out to a 62-41 dominant lead and then fouled out American East MVP Everett Duncan.

Vermont is the on team in www.valueaddbasketball.com with four of five 1st team All-Conference players, but Duncan (7 points, 4 rebounds), Stef Smith (14,3) and Ryan Davis (6,8) were held in check by Louisville's tough defense. Only a late explosion by the final All-American East 1st reamer Anthony Lamb (17, 5 with 5 blocked shots tightened the score in the last few minutes to 81-71.

Louisville looks like a contender, particularly with upset winner Yale facing them in the second round, though Dayton could await in the third round. So far favorites are 2-4 in the East, 14-2 in the other three brackets.

Teams normally have a "dunk range" that averages 51-53, but because UVa's offense was so weak (49) and defense was so strong (-6) both teams had a negative dunk range meaning rolls of 51-52 were stops for both teams - no score.

After the 20-20 game start, the game featured only 5 field goals total between the two teams in the first 18 possessions for each team (36 total possessions). At that point with 26 possessions (15:38) to play, Indiana grabbed four straight offensive rebounds with Mamadi Diakite finally fouling Jackson-Davis, who hit both free throws to make it 35-26.

While UVA was the better seed based on the bracketmatrix seeding, the cards actually show Indiana would be a favorite, as their average score in a game against the 120th best team (of 353) calculates as a 69-60 win, while UVa's cards calculate 3 points worse at a 58-52.

As a Big East fan, I hated to play two straight upsets. While Villanova's loss was somewhat the fluke of the game (see below), Yale was a legit tough matchup for Butler.

Like Butler they never foul, and for much of the game their superstar 6-10 Paul Atkinson (25 points, 9 rebounds) was three inches taller than any Butler player, and Yale defensive star Jordan Bruner (14, 9 with 2 steals and 2 blocks) was the next tallest.

Butler had trouble getting it to their superstar and www.valueaddbasketball.com 3rd team All-American Sean McDermott (10, 9) who gave a ray of hope when his four point play started a 12-3 rally that gave Butler one of their few leads at 41-40.

With only two 3-pointers made in the game, Butler put two extra 3-point shooters in the game so that four of the players on the floor were either 1-4 or 1-5 on 3-pointers mad and they went for the three which stretched those cards to 1-5 to 1-7 for 3-pointers made, but still could not find one on their last three trips to lose 71-66. 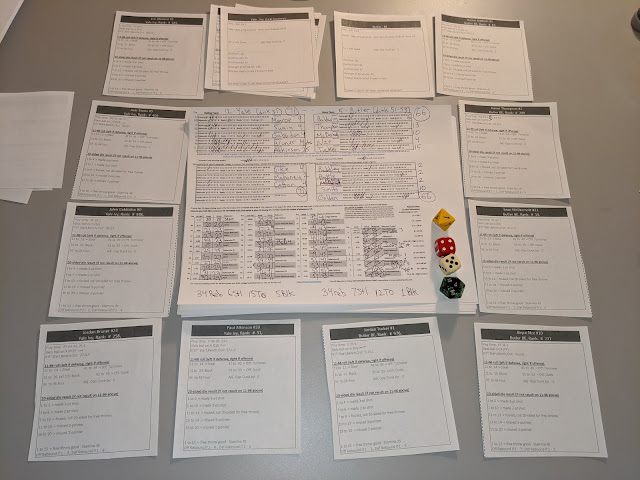 The Northern Kentucky team that held Arkansas to 66 points in Arkansas in their only quad 1 game in the real season, did the same to Villanova on a neutral court and it was just enough. In their last real home game Nova scores only 54 points as the live by the 3 die by the three seemed to catch up with the.

While 2020 did seem to be the year of parity where anyone could be beaten (including a record number of No.1s losing), two upsets by 15-seeds and 3 of 4 16-seeds keeping it to single digits losses seems unlikely in the same years.

However Villanova did show long stretches of stagnant offense when 3-pointers were not falling and that's what happened in Horizon League Northern Kentucky's win that would have been the biggest for the league since Butler's two runs to the title game.

Based on www.valueaddbasketball.com, this was one of the most balanced teams in the country with Dantez Walton (team high 17 points) making 1st team all-Horizon but three additional staters on the 2nd team - Tyler Sharpe, Jalen Tate and Adrian Nelson.

With 2 of 3 Nova sharp-shooters (Collin Gillespie and Justin Moore) not hitting any 3-pointers it was up to Saddiq Bey to tie the game twice with 3-pointers at 26-26 and 39-39 and finish with 22 points and three 3-pointers. However Villanova could not hold a 63-58 lead with 6 possessions (3:45) to play. The game ended with Gillespie (17 points) hitting a free throw and then intentionally missing the second down 68-66, but Nelson grabbed the rebound to seal the upset.

Maybe it would have been a crazy VCU-Butler type wide open year.

Providence played their normal great defense with David Duke getting 4 steals to go along with his game-high 14 points and Alpha Diallo holding Rutgers' star Ron Harper to 9 points.

However after Rutgers' Akwasi Yeboah (team-high 13 points) and Diallo (10) traded last baskets as the lead went back and forth, the game came down to the final possession. Diallo blocked Harper's shot but dominant offensive rebounders Myles Johnson grabbed the block for his 14th rebound and scores to give Rutgers a 66-65 win and chance to play Dayton in the second round.

A third 1-seed had to overcome a ridiculously hot shooting 16-seed led by Siena's Jalen Pickett (the www.valueaddbasketball.com conference MVP and good enough for most all-conferemce teams). Pickett scored 26 including three 3-pointers and the third best MAAC player Elijah Burns added 14 inside points.

In addition Dayton's Ryan Mikesell and Rodney Chatman both fouled out.

That made it nice to have perhaps the best player in the country Obi Toppin put up 32 points, 10 rebounds and 4 blocked shots and the second best A10 player Jalen Crutcher hit five 3-pointers en route to 21 points and the 93-85 win. 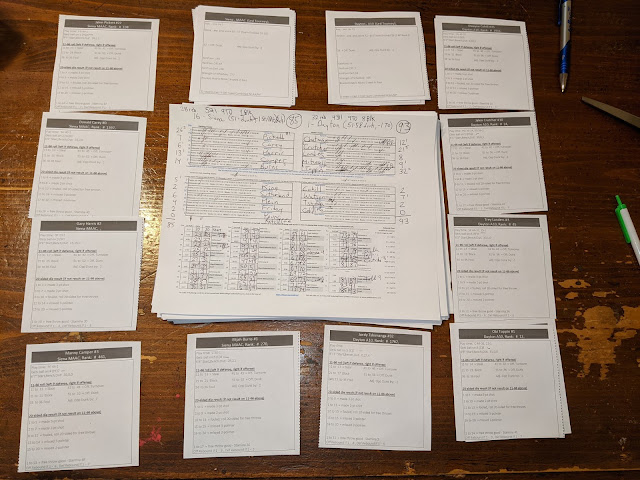 11-seed playing game: NC State 71, Richmond 67
This game had the twists and turns of many March Madness games, as both teams struggled in the first half. The Richmond Spiders great Jacob Gillyard lead a great defensive effort that gave the Spiders a 28-24 half time lead. However, NC State's great shot blocker Manny Bates, one of the few players who blocks a shot taken by any player on rolls of 32, blocked shots on the last two Richmond trips of the half to keep it close.
However, NC State's CJ Bryce (game-high 23 points) heated up in the second half, dunking with 16:22 (27 possessions) to play for NC State's first lead (33-32) and then hitting a 3-pointer on the next trip to make it 36-34.
However, Richmond regained the lead on a 4-point play by Gillyard with 6:05 (10 possessions) to play to make it 60-57 Richmond. NC State never lead again until the final two possessions (1:15 to play) when Bryce scored to make it 69-67 Wolfpack, and then on the defensive NC State center DJ Funderbunk ripped down a very difficult rebound away from Richmond players, and passed to Markel Johnson who clinched the 71-67 win with a basket.

Posted by JohnPudner at 6:42 PM