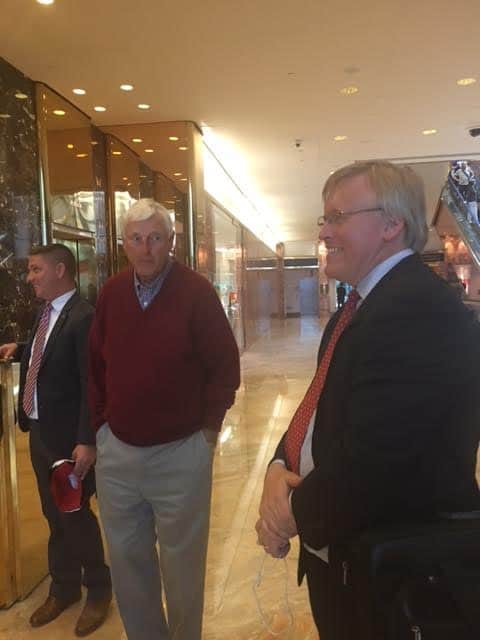 Four years ago and 40 pounds heavier I talked with Bobby Knight for a half hour, starting with recounting his 1976 Indiana Hoosiers, the last national champion to go undefeated.

If you want to skip ahead to the Final Four games, where I kept the line-by-line action for all possessions, click here.

When I started playing off the 96 great teams in Value Add Basketball Game I noted that the two best teams based on the player cards were that team and the 1972 undefeated UCLA team. However, I noted that whether it's a dice game or hot and cold streaks on an actual basketball court the chances of winning 6 straight coin flips are 1 in 64 and the chances of either UCLA or Indiana winning 6 straight against other all-time great teams was mathematically no better than one in six. And yet they both won their first three to make it to the All-Time Elite 8. Here are the final games in the tournament from there. (More than 26,000 have clicked on the game, and click here for the Sweet 16 games)

In a match-up of two of the greatest rebounding teams in the game, Center Harry Flournoy was the only Texas Western starter who did not score in double figures. However, Flournoy was the most important player on the team as he battled Bill Walton to a 9-9 rebounding draw to help the Miners win the boards 39-31 and blocked five shots to help hold Walton to 15 points to help keep the score tied 64-64 against the overall 1-seed UCLA Bruins with 4:22 (7 possessions) left to play.

The game was the easiest Value Add Basketball to play because neither team recorded minutes played or turnovers from the 1966 and 1972 seasons, so all players turned the ball over on the average 41-43 on the 11-66 dice roll, and each reserve played possessions 44-38 and then all starters came in and played from the 37th down to the final (1) possession. Since there were no 3-pointers during either season, the game was also played with all baskets counting as 2-pointers.

Lacking their normal inside dominance, the Bruin's All-American guard Henry Bibby, the father of Mike Bibby who would later lead Arizona to a national title took over after the 64-64 tie. With Texas Western coming down the court to try to break the 64-64 tie, Bibby stole the ball and scored on a fast break to make it 66-64. On the next trip he was fouled and hit one of two free throws to make it 67-64. On the next trip he scored again to make it 69-64 with 3:07 to play.

After Texas Western cut it to 69-66, Bibby's backcourt mate Greg Lee stole the ball and was fouled, and on the next trip was fouled again. Lee is not a big scorer, but at the line he makes the shot on a roll of 1-17 on the 20-sided die, and he made all four free throws with three of the rolls amazingly being a "17," meaning even an 80% free throw shooter would have missed. That made the score 73-66 with 1:52 to play, and a couple of Walton free throws helped wrap up the 75-67 win to send UCLA to the Final Four.  Final Score: UCLA 75, Texas Western 67.

Here is the entire West Bracket followed by the score sheet for the Regional Title game. 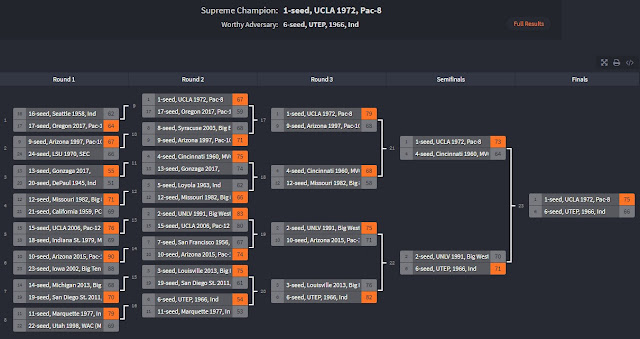 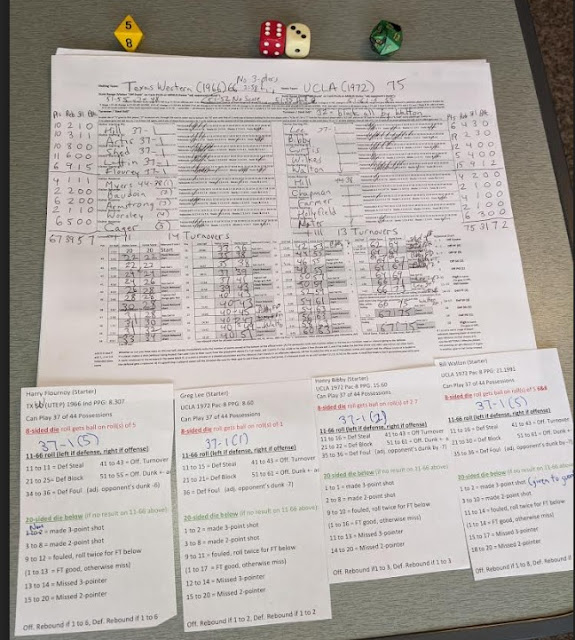 The game included a record 17 three-pointers in the 44 possession game (a projected 26 three-pointers if we played out the whole game rather than starting games at 20-20).

Over the next 13 possessions Villanova, which in real basketball destroyed Michigan for the title, went on an incredible 30-12 run that included all three of Jalen Brunson's 3-pointers in route to his game-high 30 points. All 5 Nova starters hit 3-pointers, including center Omari Spellman, and Mikal Bridges grabbed several key rebounds from Guy to end UVa possessions.

The 81-69 win gives Villanova the chance to come close to their 10 three-pointers against Bill Walton in the national semifinal. Result: Villanova 81, Virginia 69. 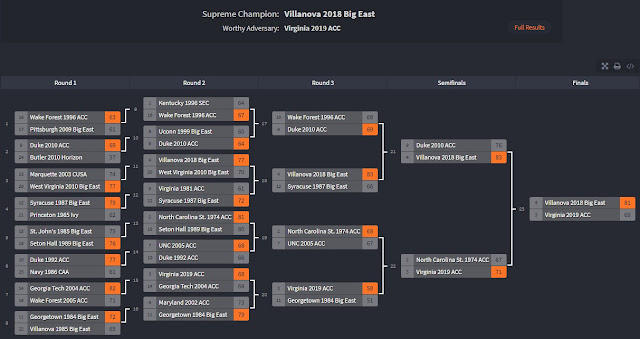 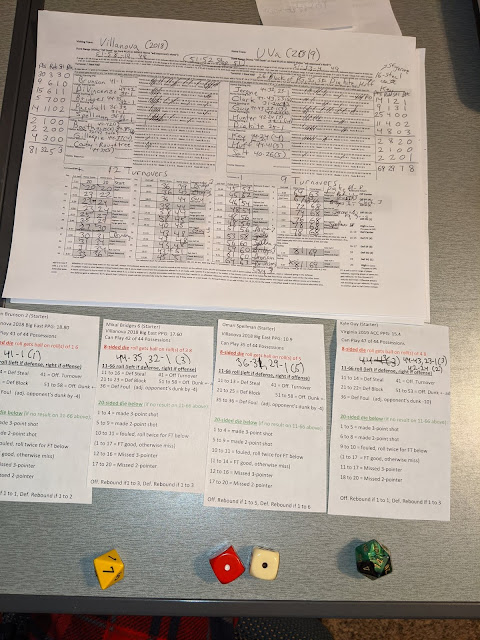 
The unbelievable magic continued for Michigan State, but not Magic Johnson's squad - this was Draymond Green's freshman team. Tom Izzo is famous for never losing in the Sweet 16 or Elite 8, and that played out even in the all-time tournament as the Spartans shocked the 2-seed version of Magic's Spartans and then the 1-seed Indiana, 70-68.

Green set the tone with 6 rebounds while he was in the game from the first (44th) possession to 24th possession (they count down) and Michigan State won the boards 32-26. Kalin Lucas had 2 steals and-1 three-point plays on three possessions to open a 64-54 lead with 5:29 (9 possessions) to go. However, Scott May scored his 32nd point to cut it to 66-65 with 1:52 to play but on the next trip Indiana has only their 2nd unforced turnover of the game and even a last second 3-pointer by Tom Abernethy left them with a 70-68 loss and Michigan State as the Cinderella Final Four team. Final Score: Michigan State 70, Indiana 68.

Here is the entire Midwest Bracket followed by the score sheet for the Regional Title game. 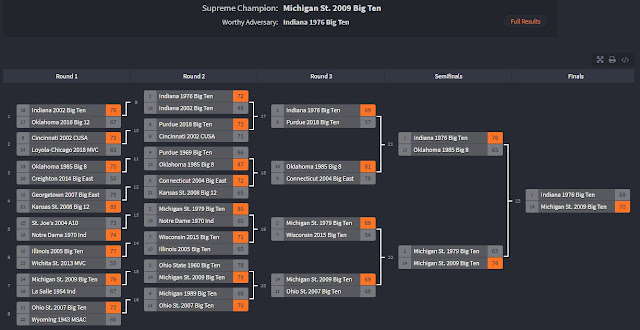 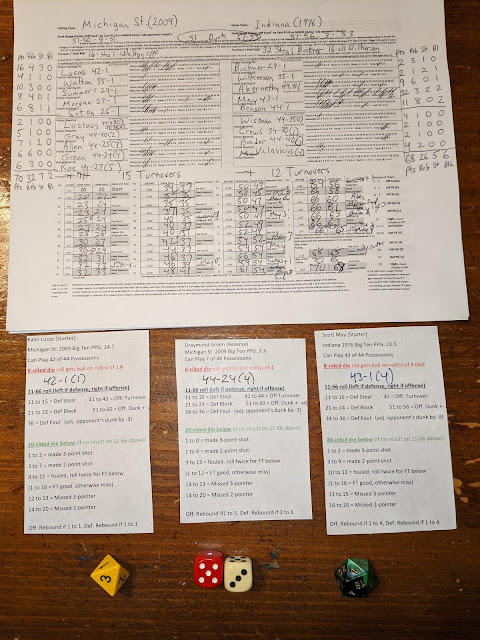 
The tournament's MVP Elvin Hayes and super guard Don Cheney, who in real play defeated Kareem and UCLA in the game of the century in 1968, led Houston to a 54-43 lead with only 6:41 (11 possessions) to play.

However, even in a game with no 3-pointers UNC went on an 11-2 run in the next four trips. How? Jordan scored the first two trips to make it 54-47. Then Sam Perkins rejected hisnforth shot of the game and Chris Blust, only in because Jimmy Black fouled out, scored an old fashioned 3-point play and. Bucket and foul to make it 54-50. After Hayes scored to make it 56-50, the biggest turnaround of the tournament occurred.

Perkins drew a 5th foul on Hayes and scored, and when he missed the free throw James Worthy grabbed the offensive rebound (less that 20% of the time offense grabs a rebound on a missed free throw) and scored to make it a 4-point play. Two trips later Perkins stole a pass and Worthy scored at the other end and drew a 5th foul on Houston's other dominant big man Ken Spain.

With Houston losing two of the most dominant rebounders or all time and replacing them with below average players UNC's 57-56 lead with 3:07 (5 possessions) seemed safe, but Cheney grabbed his 6th and 7th steal and Houston jumped back ahead 62-59 with three possessions (1:52 to play).

However Jordan came up with the steal of the game and scored on a fast break to pull UNC within 62-61 and create and extra possession (if a team chooses to fastbreak off a steal by a guard in the final 5:29 or overtime it creates and extra possession). After a Houston free throw Matt Dougherty scores to tie the game 63-63. At the other end Perkins grabbed the rebound to complete a double double (he had 13 points and 10 rebounds while Worthy had 15 and 10) and Jordan scored and was fouled at the horn, pulling off the 65-63 win despite missing the final free throw to finish with a game-high 18.

One note on that UNC team, Jordan, Worthy, Perkins and Dougherty were all drafted as one of the top 4 picks in the NBA draft (though not in the same year).

Here is the entire Midwest Bracket followed by the score sheet for the Regional Title game. 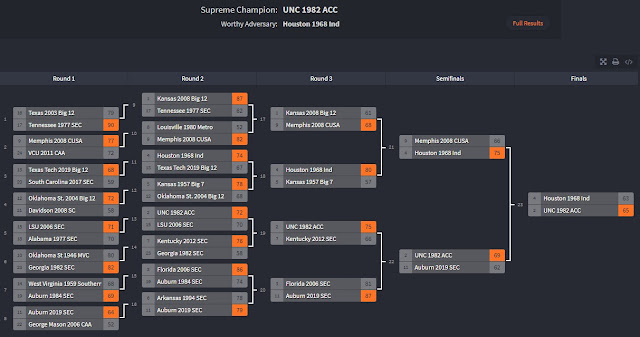 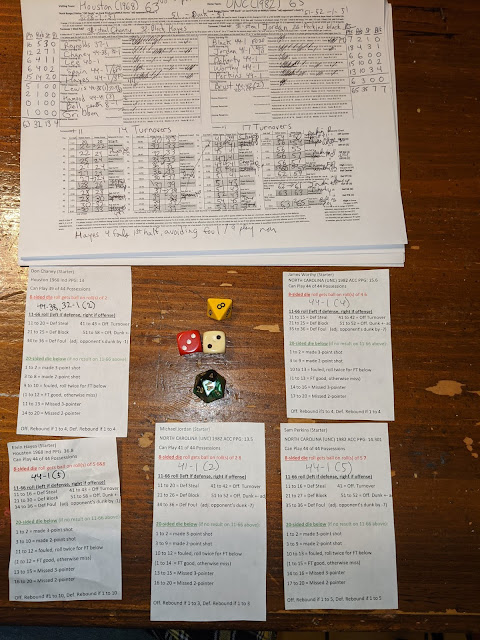 Villanova defeated Virginia for the East Region Title.
The play-by-play and box scores of the Final 4 Games are detailed in this post.
UNC defeated Villanova 74-63 in one semifinal game.
UCLA defeated Michigan State 72-57 in the other semifinal game.
UCLA defeated UNC 66-58 to be crowned all-time champion based on this first tournament of 96 teams.
For this first round we only allowed each school a maximum of one school per century, but we waived that limit when we created the additional teams and included almost every team with one of the top 50 players of all time.