The National Title Game Summary is now here if you want to skip ahead.

The March Madness 2020 simulations played using these 2020 Player Cards using the free and updated Value Add Basketball Game reached the Sweet 16. The letter and number before each team indicate the Region and Seed, so Dayton's E1 means they were the 1-seed in the East. Below this bracket finds each Region Bracket with scores and short summaries, and then longer game accounts under the East, South, Midwest, and West Regional blogs. So far the Elite 8 features a 1-, 2-, 3-, 4-, 6- and 10-seed with the remaining two games featuring a 1- vs 4-seed. For more details and the player cards and score sheet on each game click this blog. 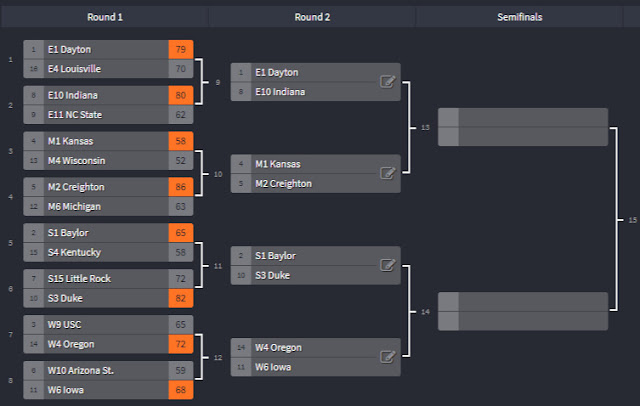 Creighton 97, Indiana 94 in OT - Trayce Jackson-Davis (28 pts, 10 reb) and Indiana overpowered Crieghton inside for a 50-36 rebounding edge. After  Jackson-Davis drew a 5th foul on Damien Jefferson Indiana led 76-71 with 53 seconds left, but Denzil Maloney re-entered the game and hit a 3-pointer, Mitch Bullock hit another and with seconds left and still down 79-77 Marcus Zegarowski (22 pts) two free throws the send a thriller into overtime 79-79 and Creighton scored 18 in OT to win.

No more than one of the four 1-seeds has made the Final 4 in 6 of the last 9 years, and with the record number of No.1 teams losing during the season this one was ripe for more of the same ...

10-Indiana 81, 1-Dayton 74. Trayce Jackson-Davis (11,13, 3 blocks) helped the Hoosier team that in the real season beat 4 top 30 teams in their last 8 games and earlier in the year beat Florida State, Ohio State and Michigan State, become what would have been the third double digit seed in 5 years to make the Final 4.

6-Iowa 74, Oregon 64 - The Big Ten's incredible dominance in the actual season translated into two of the Final 4 teams as their best player - Luka Garza - dominated Oregon for 16 points and 14 rebounds. 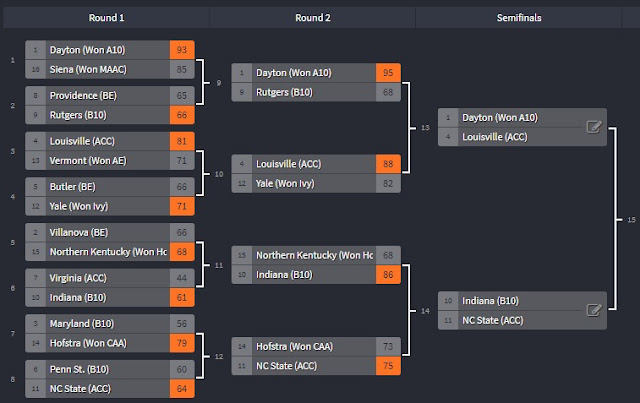 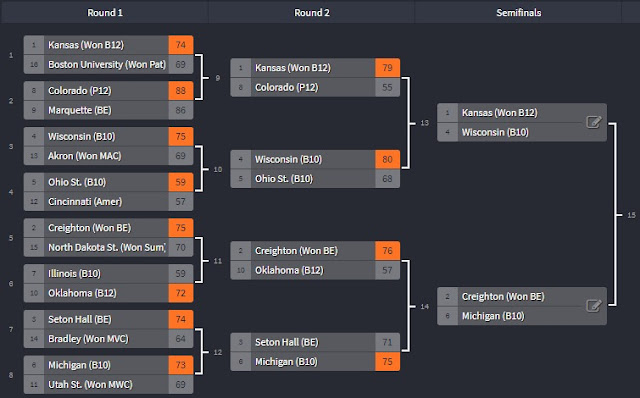 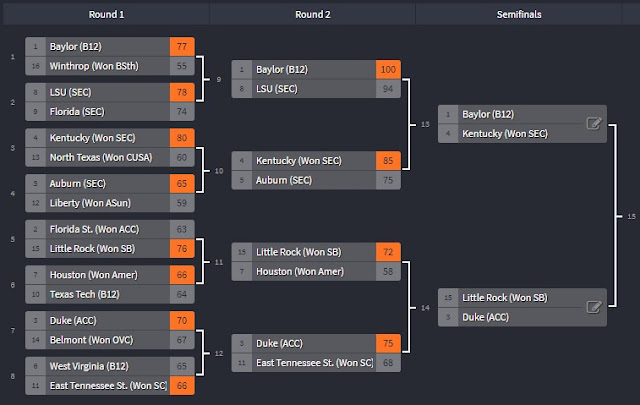 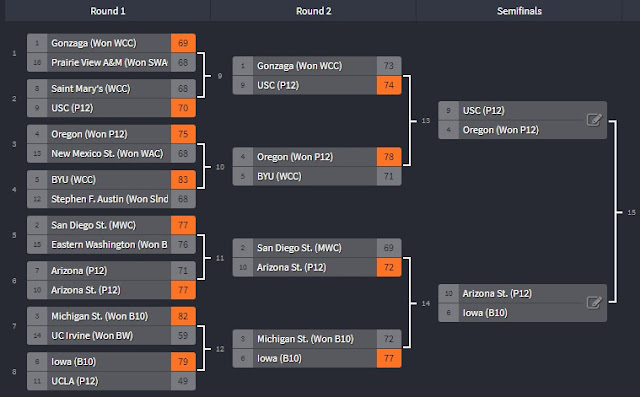 Note 1- We fixed one statistical issue that allowed players who stole the ball or grabbed an offensive rebound to score to easily - and the 1- and 2-seeds played below before that rule change giving the 15- and 16-seeds better chances at upsets before the fix. (The only result that likely was changed was Villanova's loss, but we will call it bad refereeing and letting an underdog stay too close).

Note 2 - Because the East's No. 1 seed Dayton was the 4th overall seed at BracketMatrix, the East Champion would play the Midwest Region due to Kansas being the overall No. 1 seed. The play in games are not included in the brackets (Robert Morris lost to Prairie View 70-68, NC Central lost to Boston U 80-63, Richmond lost to NC State 71-67 and Wichita State lost to Cincinnati 68-66. Note that in an actual tournament that last game and other conference match-ups (Arizona-Arizona State and LSU-Florida) would not be allowed, but we stuck with the BracketMatrix seeding and divided each four teams by logical regions rather than tweak seeds and regions.

Conference 2nd Round Teams, and Sweet 16 in Bold:

I did include below the 32 stacks in alphabetical order of 2nd round teams. If two teams had yet to play their first-round game then I stacked them together with the favored team on top and in that order. 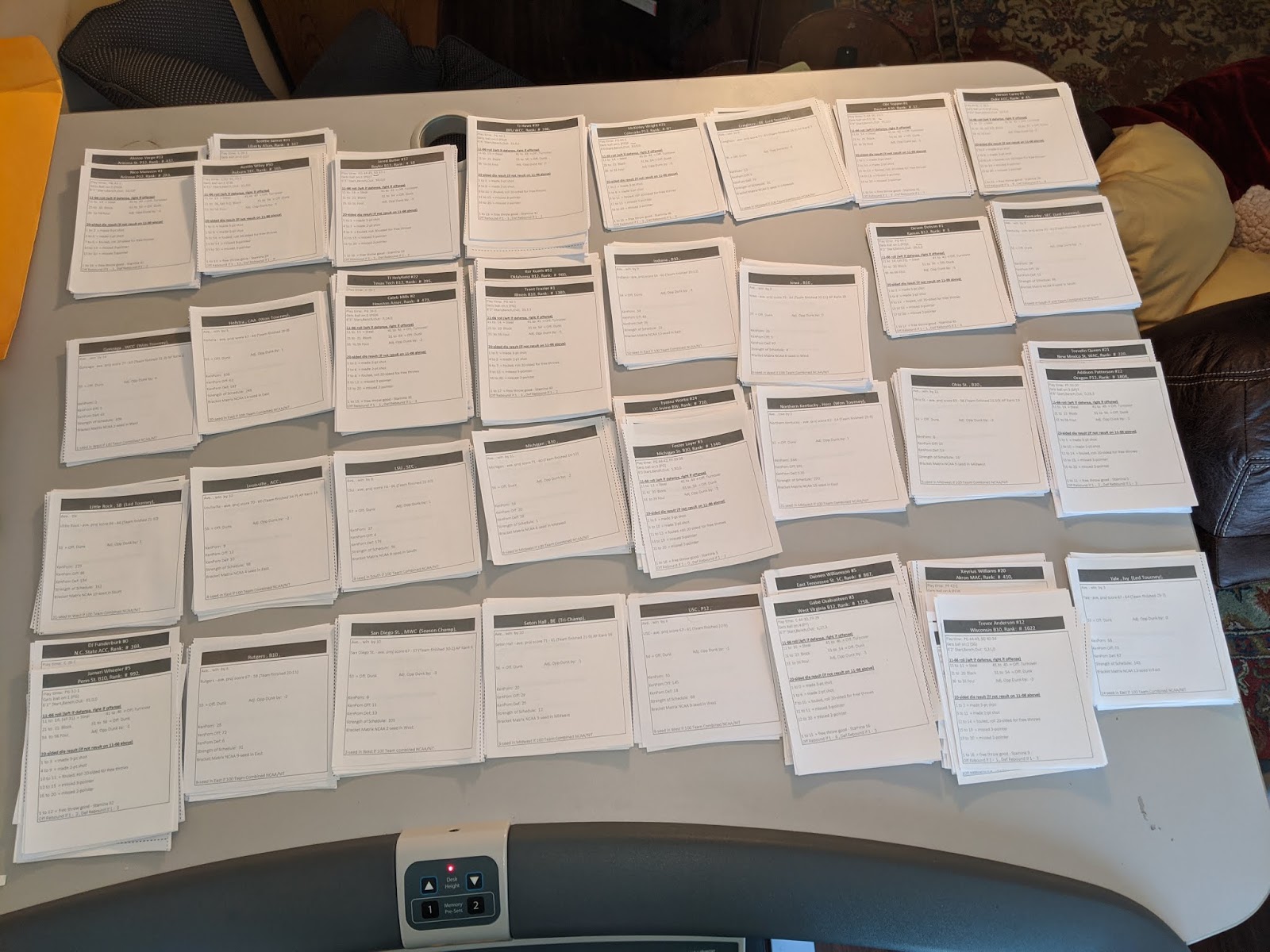