NIT 2020 March Madness (if you scroll down while viewing www.pudnersports.com you will get to all NCAA simulated results in blogs below)

This Value Add Basketball Game plays out the NCAA 2020 Tournament using these player cards. Game summaries will be included below the bracket, with the most recent result always moved to the top story until we have a NIT Champion from among these teams.

On April 19, despite having shifted from basketball to baseball, we played one NIT game as our first game since getting each team's player cards all on the one sheet, and as the first "home game" with South Alabama visiting Oklahoma State (so 36 and 66 rolls go ahead the away team). Game account below: 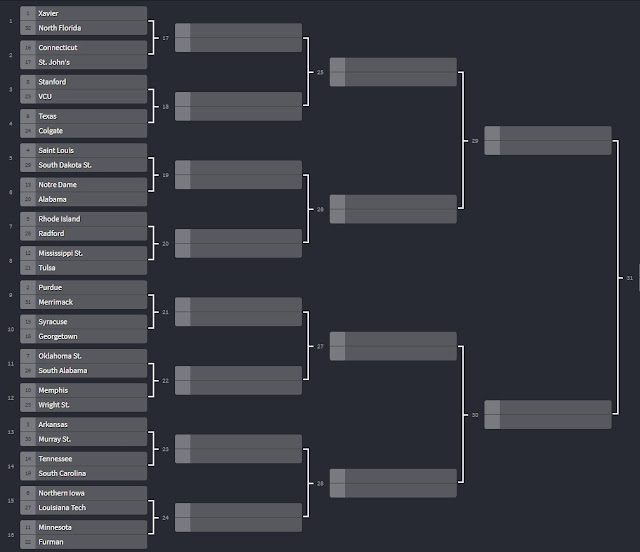 Since our NCAA tournament was played using neutral court rules, this was the first time a game was played as a home game, and two calls hurt USA. The refs missed a call (36 roll) that prevented Mitchell from hitting a 3-pointer and instead caused a turnover. Later Mitchell's 5th foul was on a good call but one that would have been overlooked (also 36 roll) if South Alabama were at home.

From the time Mitchell fouled out USA was outscored 28-11 in part because of several OSU baskets on shots Mitchell would have blocked if still in the game.

With the other two front line players fouled out, USA's Chad Lott (16 points) kept it close for a while, but OSU's point guard Isaac Likelele (9 points, 5 steals) helped OSU win the turnover battle 16 to 8.

The following photo is of the first game played with the team sheets rather than the bigger playing cards. All 10 players on each team are on their sheet, though in the photo we just show the 5.starters across the top and the scoresheet at the top. 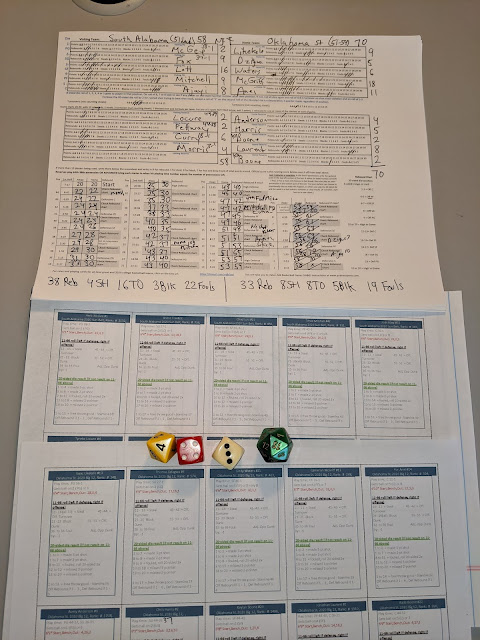 Posted by JohnPudner at 6:44 PM