This Value Add Basketball Game plays out the NCAA 2020 Tournament using these player cards. Game summaries will be included below the bracket, with the most recent result always moved to the top story until we have a South Region Champion from among these teams. Other Regions here. 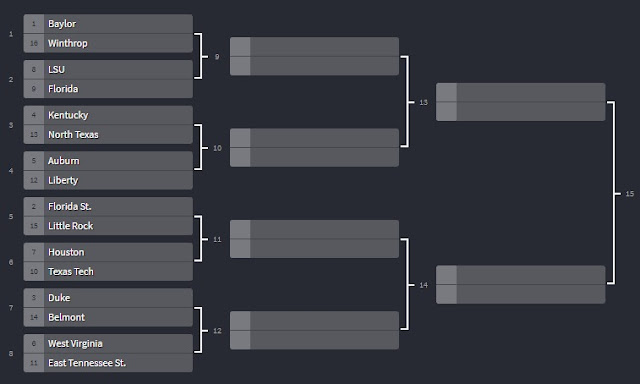 Jordan Goldwater (5 steals) held www.valueaddbasketball.com Southern Conference MVP Isaiah Tisdale to 10 points and the other 4 Duke scorers hit double figures. Tisdale and PG Daivien Williamson hit back to back 3s to pull within 65-62 with 4:35 to play but Vernon Carey (game high 15) went inside down the stretch including drawing a 5th foul on ETSU's center. 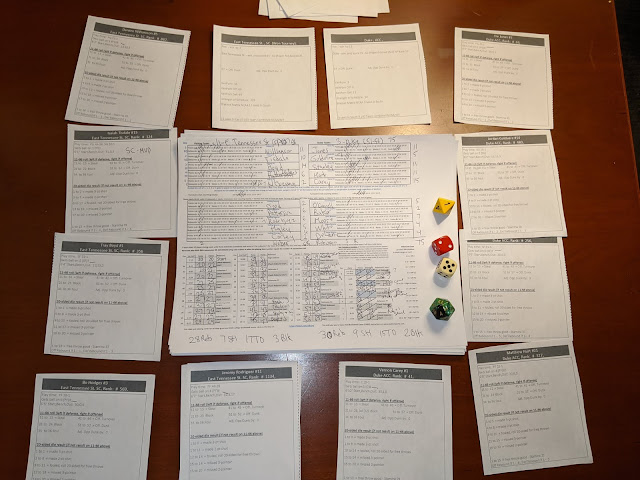 In perhaps the most exiting table top sports game I've ever played, Baylor rallied from down 45-32 to force not one, but two overtimes on buzzer beaters to pull off a 100-94 win.

The end of the 1st overtime was the most unlikely after www.valueaddbasketball.com 1st team All-SEC point guard Javonte Smart scored his 24th point to give LSU a 84-81 lead. Baylor brought in an extra 3-pointer shooter Matthew Mayer for the first time on their last trip, but he was fouled. A la UVA 2019, he made the first one and intentionally missed the second, a scenario in which the offense only gets the free throw about 1 in 6 times, but Freddie Gillespie grabbed his 20th rebound, and passed to Jared Butler who scored to tie it at 84-84.

It's still hard to say if he would have received game MVP of if that would have gone to Jared Butler (33 points, 6 rebounds, 5 steals), who moved to point guard after Davion Mitchell fouled out guarding LSU's Mays (24 points, 8 steals as www.valueaddbasketball.com all-SEC 1st team).

With 1:30 to go in the second overtime Butler drive and drew the crucial 5th foul on Mitchell and then hit both free throws to tie the game 90-90. While Butler qualifies as a point guard and this could take over the offense when Mitchell fouled out, Mays is the only qualified PG for LSU which led to three turnovers in the final 1:30 (see rules for playing without a point guard). 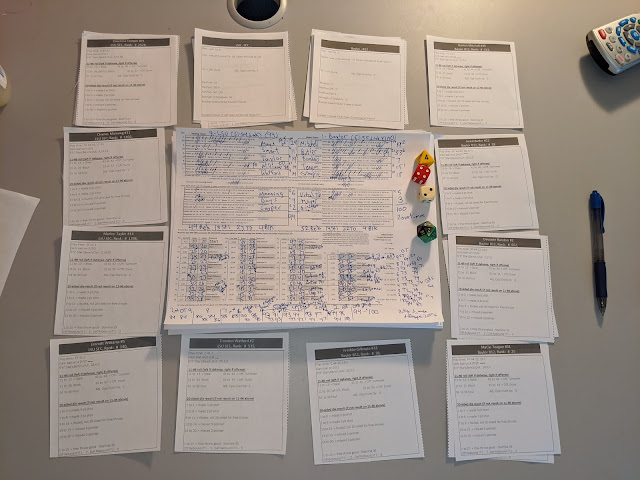 Nate Hinton, the www.valueaddbasketball.com 3rd team All-American, capped a double-double with a dunk to avoid overtime and propel Houston to a 66-64 win.

With 9 possessions to go Kyler Edwards drove and scored while drawing a foul, hitting the free throw to pull Texas Tech within 54-49. The play was particularly important because it was the All-American Hinton's 4th foul, and anytime a team draws a foul or is able to steal and fastbreak in the last 9 possessions, it creates an extra possession (see the scores recorded above the diagonal lines on from possessions 9 to 1 and note some of those possessions also have a score below the diagonal line to indicate what happened above the line created that extra possession).

David Moretti (16 points, 3 steals who starred in last year's run to the title game) stole the ball and scored on the fastbreak, then TJ Holyfield grabbed a missed shot and scored to make it 54-53. Two possessions later Moretti drilled a 3-pointer to cap the 10-0, 1 minute 39 second stretch to make it 56-54 Texas Tech with 3:21 to play.

Houston did not regain the lead until 1:30 to play when Marc Sasser (8 points, 2 three-pointers) grabbed his 3rd steal and passed ahead on the fastbreak to Caleb Mills (13 points) who drilled his second 3-pointer and was fouled completing the 4-point play for a 61-58 lead. Note:
When a player grabs and offensive rebound or steals the ball and chooses to fastbreak, his team's chances of scoring improves because the 20-sided die roll is lowered by 1. The player getting the steal has a 50-50 chance of finishing with the ball since he gets the ball on the 8-sided die on a 6, 7 or 8 while a 1-5 roll goes to the possession. However when it is the player who grabbed a rebound all 3-pointers are changed ton2-pointers.

Despite Sasser's 2nd 3-pointer in the closing minutes, Texas Tech scored on their last three possessions to keep the pressure up before Hinton's game winning slam.

With 5:49 to play and Auburn clinging to a 53-50 lead, it looked like the game might come down to whether www.valueaddbasketball.com ASun MVP Scottie James (12 points, 10 rebounds) or his counterpart center Austin Wiley (12 points, 12 rebounds, 5 blocks) would draw a 5th foul to get the other out of the game. Both ranked in the top 4% of all players this season, and with Wiley being perhaps the best rebounder in the game and James almost as good, neither team could afford to rest their center down the stretch.

Liberty never led, but all-ASun 1st teamers Georgie Pacheco-Ortiz (point guard who helped force 15 Auburn turnovers) and Caleb Homesley (team high 14 points and two of Liberty's five three pointers) helped the Flames' strong defense hold Auburn to one 3-pointer. They stayed within a few points most of the game until the final five points and tied at 31 and 47.

However Auburn had the ace in www.valueaddbasketball.com 2nd team all-SEC shooting guard Samir Doughty, who took over after the 53-50 score. 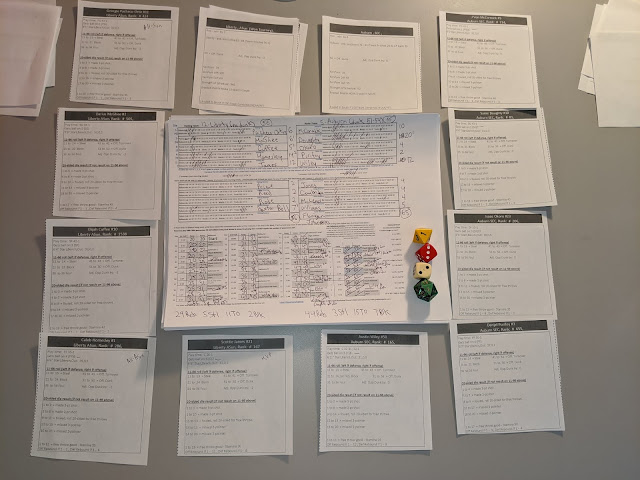 After the mandatory 20-20 start to the Value Add Basketball Game, the game made it to 19:17 remaining with West Virginia pitching a shutout - 29-20.

After Tray Boyd finally scored to make it 29-22* Tisdale scored and then ETSU found they scoring from behind the arc with three 3-pointers and on another occasion three free throws over just 6 possessions capped by a Tisdale 3. Boyd then scored to tie the game for the first time at 39.

Miles McBride (game high 16) pulled West Virginia back within 64-63. However after both teams came up empty, ETSU missed a shot and only to have Lucas N'Guessan (13 points, game-high 10 rebounds) grab one offensive rebound then Bo Hodges tap it in on a second rebound to make it 66-63 with 16 seconds to go.

West Virginia missed one last 3-pointer and www.valueaddbasketball.com 2nd team All-Big 12 player Oscar Tshiebwe tapped it in to make it 66-65, but the Mountaineers could not get the ball back. 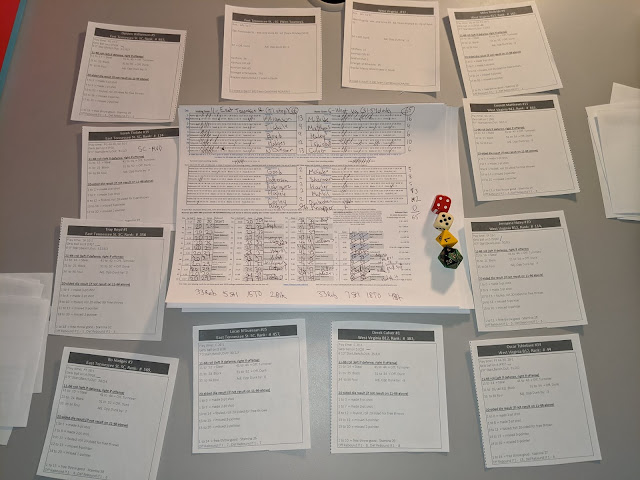 After North Texas took a 34-26, it was all Kentucky due in part to Ashton Hagan's game-record 10 steals. 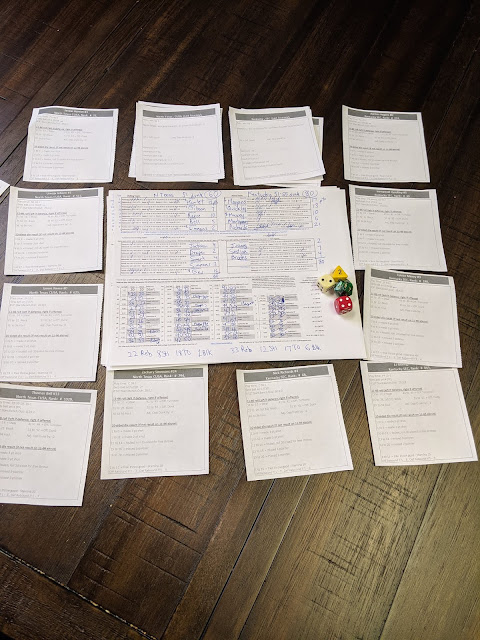 After a few close calls, game 18 of our tournament yielded the first huge upset.

Florida State historical drawfs opponents, but Sun Belt www.valueaddbasketball.com mvp Rout Monyyong dominated the Seminoles with 17 points and 15 rebounds. At 6-foot-10 he received support off the bench from 7-foot Admit Besovic and 6-foot-10 Nikola Maric as Little Rock recorded an amazing 45 rebounds to eliminate the Seminoles 76-63.

If this were the actual tournament instead of a simulation, Little Rock would have been the third 15-seed to handle a 2-seed relatively easily in the last 8 years following Florida Gulf Coast's dunk feat over Georgetown (78-68) and Middle Tennessee State scoring at will against Michigan State (90-81).

ACC www.valueaddbasketball.com MVP Devin Vassell was the only Seminole in double figures with 13 points and 10 rebounds.

Florida was a 10-point favorite, making them the first team in the tournament favorite by more than 1-point to lose. 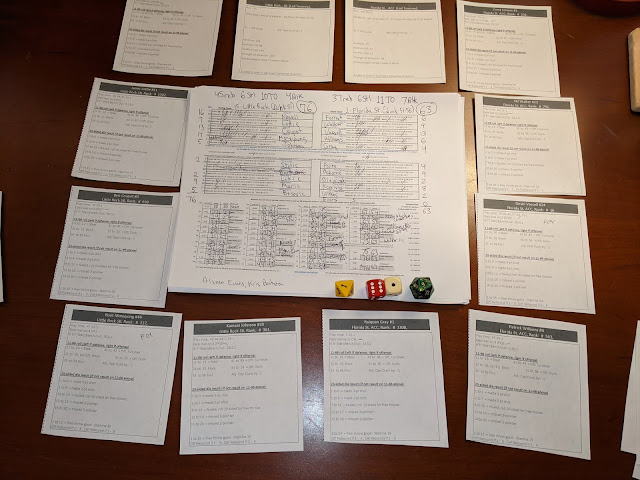 Duke appeared to wrap the game up when Jordan Goldwire came up with steals on consecutive possessions and hitting 3-pointers on consecutive trips to give Duke a 64-56 lead. Tre Jones then stretched the lead to 68-58 with just 6 possessions (3:45 to play).

However Jones had 4 fouls and had to let Cassius' Stanley guard OVC MVP Grayson Murphy, who let Belmont all the way back to 68-67 onna steal and 3-pointer of his own with 3 possessions (1:52 to go).

Vernon Carey came up with tough defensive rebounds few players could have gotten after Belmont misses on the last 2 trips and Duke prevailed. Murphy had a game-high 17 points, while Duke was led.by Carey and Jones with 15 each. 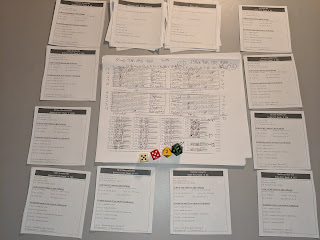 Mark Vital stole the ball three times early and even though he missed on fast breaks, Freddie Gillespie (one of the best offensive rebounders in the game) kept grabbing offensive rebounds and sticking them back in for baskets. While he doesn't look for shots that often, his five stickbacks accounted for part of his 20 point, 15 rebound game.

While none of the other four Baylor starters are taller than 6-foot-3, fellow superstars Jared Butler (17 points, 3 rebounds) and MaCio Teague (15,8) and the organizer point guard Davion Mitchell (16,4) helped the shorter Baylor winnthe boards 39-29, and Devonte Bandoo hit a key 3 as the only six Baylor players to play dominated. When Wintrop did get past them, Gillespie was there to block 5 shots.

Josh Jones and back-up Russell Jones had 10 apiece for Winthrop. 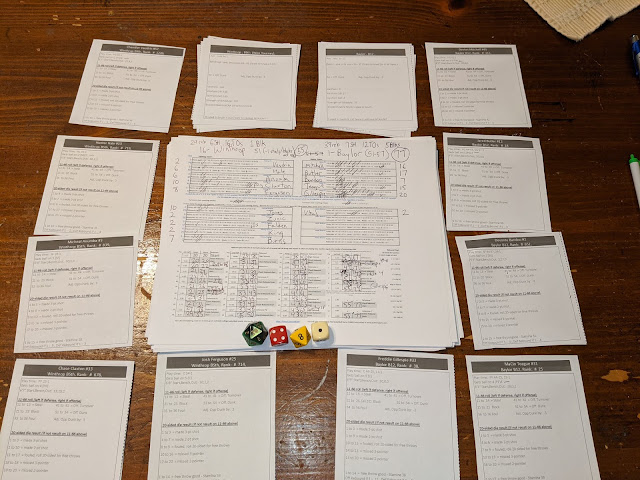 Emmitt Williams recorded his 5th and 6th blocked shots last in the game and then Javonte Smart hit one of only 6 3-pointers in the game to stretch LSU's lead to 75-66 and they held on for a 78-74 win.